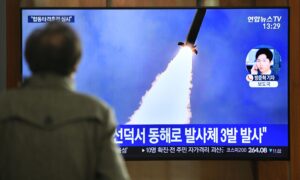 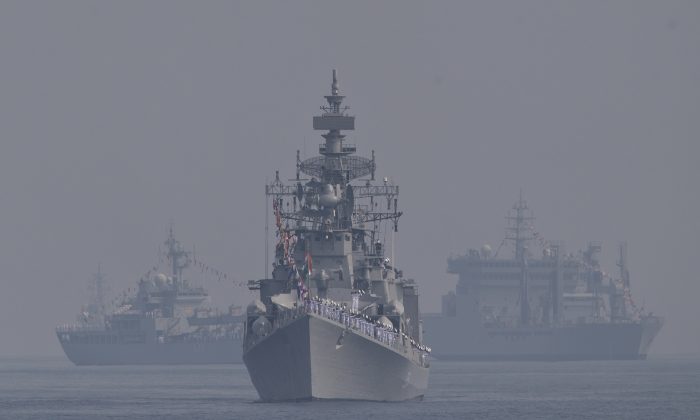 Indian guided missile destroyer 'Ranveer' is seen during the International Fleet Review in Vishakapatnam, India, on Feb. 6, 2016. Indian President Pranab Mukherjee, who is the supreme commander of the Indian armed forces, reviewed a fleet of over 90 naval ships including several from foreign countries. (AP Photo/Saurabh Das)
Asia & Pacific

When the rivers shrink during Africa’s dry season, the hippopotamuses fight fiercely for their space in the scarce and overcrowded water. Something similar is happening in the Indian Ocean and South China Sea where nations are vying for territory and resources.

China is nonchalantly building up military bases to assert its so-called “historical claims” to oil- and gas-rich islands which are also claimed by other countries in China’s neighborhood.

Then, there is also the paradigm shift in sea piracy. Pirates have moved from the Horn of Africa, around Somalia, to Southeast Asia’s Strait of Malacca—the world’s most important sea-trade lane.

A combination of security and mercantile compulsions has made India rethink its naval defense strategy, flanking its land and air forces with a strengthening of its naval assets.

In anticipation of future challenges in the huge expanse of the Indian Ocean—India’s “backyard,” as it were—a massive modernization of India’s naval force is underway. A number of factors have spurred India to build up its naval assets: China’s growing presence in the Indian Ocean, India’s growing international commerce, and terrorism activities emanating from neighboring Pakistan.

India is keen to assert its credentials as a guarantor of regional security.

India has regularly carried out a series of joint naval exercises with a number of countries; a trilateral exercise called “Malabar” was carried out a few months back in concert with the U.S. and Japanese navies.

Indian officials, in private conversations, have told me that while India played host to the IFR, the intention was to encourage all the participating nations to join hands to fight common security and humanitarian threats at sea, thereby fostering greater regional solidarity, cooperation, and goodwill.

China, one of the IFR participants, views others—and is also viewed by others—with deep suspicion. China, it might be recalled, did not participate in another IFR exercise held a few months back under Japan’s aegis.

While India talks about the use of navies as a unifying factor—it speaks of “oceans unifying nations divided by disputes”—the IFR’s strategic dimension cannot be overlooked. India has deep concerns about the potential risks through the growing naval activities in the Indian Ocean, and is keen to assert its credentials as a guarantor of regional security. These thoughts are also embedded in Indian navy’s “new maritime strategy” paper released in October 2015.

The Indian navy wants to create what some strategists describe as “smart ships” which, besides performing the general ocean vigilance and security tasks, can react with alacrity and flexibility to specific security situations.

The Indian navy wants to create what some strategists describe as ‘smart ships.’

The Indian navy’s recent maneuver at its naval bases in the Andaman and Nicobar islands illustrates the point: deploying its P81 maritime patrol aircraft from these islands, India shadowed a Chinese submarine that had entered Indian waters. Chinese submarines are known to “accidentally” drift into Indian territorial waters.

A recent book on India’s maritime strengths and idiosyncrasies, “The Diplomatic Dimensions of Maritime Challenges for India in the 21st Century,” highlights India’s ambitions on the high seas and the strategic thinking behind the country’s emphasis on its naval expansion. The book is penned by Yogendra Kumar, a former Indian ambassador to the Philippines with intimate knowledge of the maritime security in the Indian Ocean, particularly the South China Sea.

Kumar takes the reader on a journey from India’s past to its future, with country endeavoring to regain its past glory as a maritime nation. The book also seeks to illustrate India’s efforts to erase what has been described as the “legacy of maritime blindness” resulting from the restraint forced upon its naval prowess by the British colonial power. The British would, condescendingly, describe the Indian Ocean as a “British lake” under the supervision a British Royal Navy commander.

This wounded pride is part of what is vaulting India into its growing assertion on the international stage.

After its independence from British rule in 1947, India embarked upon overhauling and strengthening its naval assets, including the coast guard, the coastal police, shipping, and the department responsible for ocean affairs.

In 2009, then U.S. Secretary of Defense Robert Gates argued that India should become a security provider in the region. Indeed, Washington has been quietly encouraging India to pursue its role as a security provider, as was also mentioned in the U.S. Department of Defense’s report titled “U.S. Asia Pacific Maritime Security Strategy.”

Whether India will venture beyond preserving its “backyard,” remains to be seen. But it has already demonstrated that it will not shy away from joining hands with partners in Southeast Asia that stake a claim to islands in the South China Sea.

With its desire to acquire blue water capability and be a security provider in Asia, expect greater participation from India through its naval presence in the Indian Ocean Rim.