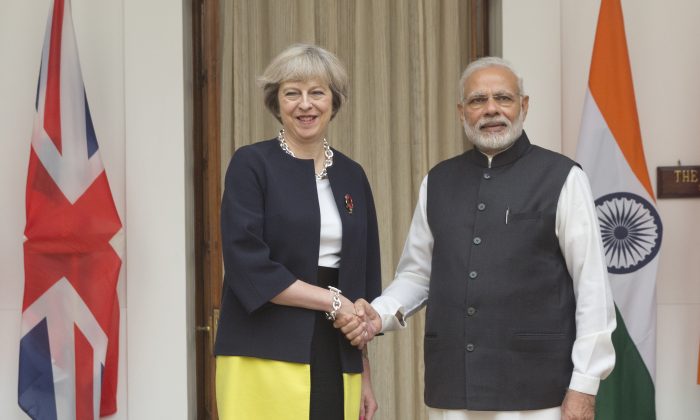 Indian Prime Minister Narendra Modi, right, shakes hand with his British counterpart Theresa May before a meeting in New Delhi, India, Monday, Nov. 7, 2016. Modi and May have begun wide-ranging talks aimed at deepening ties between their two countries and boosting trade and investment as the U.K. plans to leave the European Union. May arrived in New Delhi late Sunday on her first bilateral visit overseas since she became prime minister in July. (AP Photo/Manish Swarup)
International

NEW DELHI—British Prime Minister Theresa May and her Indian counterpart, Narendra Modi, held talks Monday aimed at deepening ties between their countries and boosting trade and investment as the U.K. prepares to leave the European Union.

May arrived in New Delhi late Sunday on her first trip outside of Europe since she became prime minister in July. She was accompanied by trade officials and a large business delegation consisting predominantly of small and medium-sized businesses.

The talks between the two leaders focused on bringing down trade barriers and preparing the ground for a free-trade deal after Britain leaves the EU.

According to Britain’s trade office, India is the second-largest international job creator in the country, with Indian companies currently employing more than 100,000 people.

Earlier Monday, Modi and May inaugurated a technology summit to boost trade in advanced scientific and technology businesses.

“Britain is open for business,” May told delegates at the India-U.K. Tech Summit, billed as South Asia’s biggest technology conference.

The contentious issue of easing visa rules for Indians to enter the U.K. has figured prominently during May’s visit.

Modi told the technology summit that greater mobility for young Indians was important for India.

“Education is vital for our students and will define our engagement in a shared future,” Modi said. “We must therefore encourage greater mobility and participation of young people in education and research opportunities.”

May said a small number of “high net worth” individuals would find it easier to enter Britain as visa restrictions would be relaxed for them.

She said Indian business leaders who frequently visit the U.K. would be allowed entry under a “registered traveler scheme,” a program that has so far been extended only to citizens of developed countries.

For the rest, she insisted that the U.K. “already has a good system” for visa applications from India.

Indian officials said the tightening of visa rules was responsible for a sharp decline in the number of Indian students enrolling in British universities.

“We will continue to raise our concerns regarding mobility with the U.K.,” said Vikas Swarup, spokesman of India’s Ministry of External Affairs. “Mobility of people is closely linked to free flow of finance, goods and services.”

With concerns over economic stagnation and uncertainty as Britain exits the EU, May said her government wanted to “ensure that the U.K. remains one of the most attractive countries in the world to do business and invest.”

She said the U.K. and India were “natural partners.”

“As the U.K. leaves the EU and India continues its rise in the world, we should seize the opportunities ahead,” May said in a statement at the end of her talks with Modi.

The two leaders discussed defense cooperation and cyber security and agreed to work together to safeguard their countries from emerging security threats, she said.

At the end of the talks, officials from the two countries signed agreements on the ease of doing business and protecting intellectual property rights. They also set up a joint panel to promote trade.

More than 65 years after India gained independence from British colonial rule, some of Britain’s best-known brands are owned by Indian companies, including Jaguar and Land Rover automobiles and Tetley Tea.