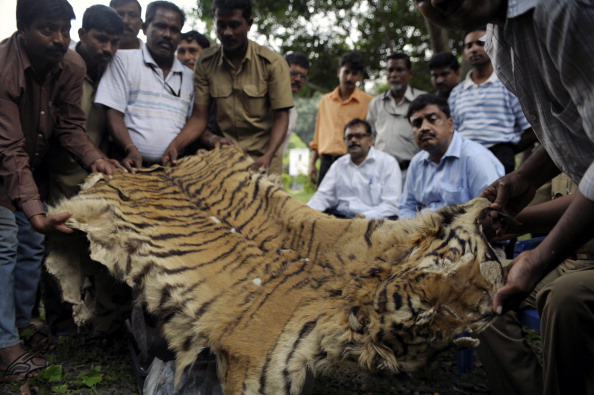 ndian forest officials display a seized bengal tiger skin in Kolkata on November 16, 2010. The skin was seized by a team of Sunderbans Tiger Reserve (STR) officials from a local market in the outskirts of Kolkata, while three people were arrested. (Deshakalyan Chowdhury/AFP/Getty Images)
Environment

India has had a tremendous rate of industrial development and urbanization over the years. Although development is essential for the nation’s growth, it has often been at the cost of some environmental detriment without the consideration that development and environment can work hand in hand. Now an official Government report confirms that Indian flora and fauna, specifically those in the biodiversity hotspots of Himalayas, Northeast, Western Ghats and the Nicobar Islands are under a serious threat.

However the Fifth National Report to the Convention on Biodiversity (CBD) which was created before the CBD’s Strategic Plan for Biodiversity 2011-2020 has pointed out that how nature’s bounty is being ignored and destroyed in the name of urbanisation.

The report points, the major threats to biodiversity of India are,

A. conversion of land use through agriculture,

B. Urbanisation and industrial development,

The official government report has also made several alarming revelations. The revelations listed below show that the fragile Indian ecosystem requires more protection than ever.

The Environmental Ministry report made a disturbing disclosure that since the enactment of the Forest Conservation Act in 1980,  the Ministry has allocated an estimated of over 1.7 million hectares of forest land for the execution of more than 23,000 developmental projects.

The ministry report states that 49.63 percent of the total geographic area of the country is under low fragmentation, 21.89 percent under medium fragmentation and 5.16 percent under high fragmentation. This directly threatens the existence of all species and specially makes the already endangered species all the more vulnerable as they do not find enough space to live or breed and expand territories.

Habitat Loss due to natural and artificial causes

The Aravalli ranges and the Western Ghats are facing severe habitat loss and destruction because of activities like mining and quarrying.

The forests of Himalayas and the dry deciduous forests of Southern India are subject to forest fires which have become an increasing threat to the forest creatures of these regions.

The coastlines and marine waters of Andaman and Nicobar Islands are rich in biodiversity and the islands house many endemic species such as the Nicobar Tree Shrew. The amazing coral reefs of the Nicobar Island are one of the most spectacular island eco-systems in the world. All of these are extremely vulnerable to habitat degradation.

Grasslands across the country are home to a variety of species such as the Great Indian Bustard, Bengal florican, Lesser florican, Houbara Bustard, Blackbuck, Chinkara, Indian wolf, Golden jackal, Indian fox and Nilgai. Many grasslands were considered as wastelands and converted to agricultural land causing loss of habitat for these species and leading to decline in their populations.

One of the most serious and current threat to biodiversity is the climatic change caused by human activities. An impact of climate change has been seen in the Himalayas where it has caused advancements and delays in the flowering and fruiting seasons of many species and the shrinking of alpine meadows. The life cycle of the flora determines the food availability in these regions and thus affects the fauna and the livelihoods of local communities dependent on these eco systems.

Sunderbans, the only mangrove ecosystem in the world where tigers exist is under serious threat of submerging completely if climate continues to rise.

Is awareness the only solution?

Overall 39 sites in India in Kerala, Karnataka, Tamil Nadu, Maharashtra and very recently Himachal Pradesh have been inscribed as UNESCO World Heritage sites owing to the high levels of endemism. This proves that Indian biodiversity is now receiving global protection.

On the other hand, the government report states that in the last financial year itself, even at a conservative estimate, around 9200 crores has been spent on activities that have a direct or an indirect bearing on the country’s biodiversity conservation.

These actions raise the question of how far can awareness alone help in conservation. It is high time that conservation laws be implemented more strictly and sustainable development becomes the law for any growth plan.

This article was originally written and posted by Shilpi Gemawat, a contributing writer for indiasendangered.com. For the original article and more information, please click HERE.