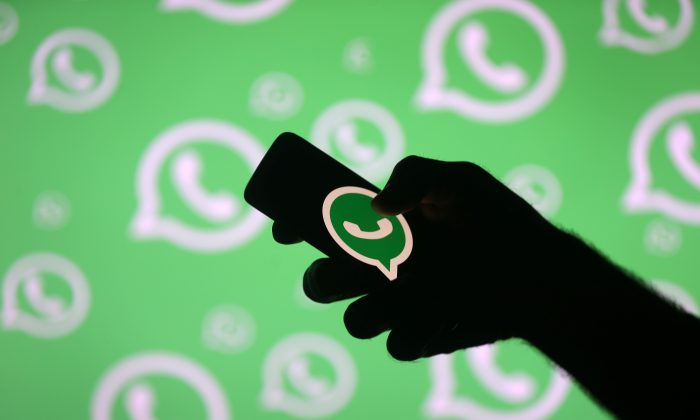 A man poses with a smartphone in front of a displayed WhatsApp logo in an illustration, on Sept. 14, 2017. (Reuters/Dado Ruvic).
India

NEW DELHI—India arrested two Chinese women and 10 others accused of operating a fraud racket in New Delhi that officials say duped 40,000 people through a malicious app being circulated on WhatsApp.

This is the most recent incident of cybercrime involving Chinese-made mobile applications, some of which may be linked to Chinese espionage, police said.

The app helped the accused collect the personal data of unsuspecting people for illegitimate purposes. Victims were lured by the offer of lucrative returns from an online multilevel marketing campaign; they allegedly were offered $41 (3000 rupees) of daily commission for spending 30 minutes on the app—called NewWorld—promoting internet celebrities on Facebook, Instagram, and YouTube.

The network then sent them social media videos to like and social media accounts to follow, and for every such action, the users were paid 8 cents (6 rupees), according to India Times.

If the users opted for a VIP membership, the number of tasks assigned and the amount paid for every activity exponentially increased. The users were made to pay $14 to $684 (1,000 to 50,000 rupees) for obtaining VIP status.

“The malicious App also induced users to pay for VIP accounts to earn more. These payments were never honored and were siphoned off,” the DCP Cybercrime unit said in a message on Twitter.

“They used more than 40 shell companies and a large number of Bank accounts, Crypto-Wallets, etc., to launder and siphon the cheated money,” the DCP Cybercrime unit said.

Meanwhile, Google removed 60 made-in-China instant loan apps from its play store on Jan. 15 in response to a complaint by the Hyderabad Police.

While the apps were Chinese-made, they were uploaded in India, The Times of India reported. Weeks ago, Indian investigative agencies asked Google to remove 300 apps from its store.

The agencies were reviewing how these apps lure and dupe unsuspecting people, and harass them for missing repayment deadlines, even by a few hours or a day. Six people in India killed themselves because of being publicly humiliated by such app-running operations, the Times of India said.

In a major action, the CyPAD Unit of @DelhiPolice has arrested two Chinese nationals along with 10 others for running an online malicious App that hacked into Indian Users’ devices and also pushed them to follow Social Media (FB, Insta & YT) accounts of unknown origin and control. pic.twitter.com/a1niGSCmNy

On Dec. 25, 2020, India arrested a Chinese man who managed companies that operated at least 11 apps offering small loans at extremely high interest rates to Indians between the ages of 20 and 40.

Yi Bai (alias Dennis) was arrested by cyber police in Hyderabad during a raid on a call center, for illegally running money-lending mobile applications, the Indian media outlet DNA reported on Dec. 26.

Fifteen people were arrested in three different cities in India (Hyderabad, Delhi, and Bengaluru). During the raids, the police also seized more than 2 crore rupees (about $271,000) in cash, The Times of India reported.

As the COVID-19 pandemic led to extensive job losses in India after the lockdown was imposed in March 2020, people needed credit, and that’s when the made-in-China instant loan apps started to gain traction in the Indian market.

“Then, definitely, people will be lured, and that saves a lot of time if you get easy money, small amounts of funds for your regular needs. This is a very strong factor about why people are attracted to these instant small loans,” said Pandya.

He said that India currently has a huge market for small loan-based apps, as the internet data is cheap, an extremely high segment of the population owns Android phones, and the society is fast turning into a consumerist economy that’s reeling from an economic recession because of the pandemic.

To the companies offering such loans, since the amounts are small and come with a huge interest rate, they don’t cause much loss to the company if a default occurs, according to The News Minute, an Indian media outlet that has documented the criminal operations of a few Chinese companies operating these small-loan apps.

The report said the same operations ran in China as early as 2012, but the Chinese regime clamped down on the industry in 2016 and asked the small loan applications, called Peer-2-Peer (P2P) apps, to clear outstanding loans and exit the industry.

It was then that these lenders turned their attention toward India.

The vulnerability of the Indian users and the Indian security system to these small loan apps is high because of the low level of tech literacy among the people, Pandya said.

“There is also a very extreme level of illiteracy and lack of awareness about the pernicious impact of such apps,” he said.

Pandya said that though such incidents come under the heading of cybercrimes, there’s a high possibility of them being linked to wider Chinese espionage activities.

“We also know about how China has been conducting intelligence and influence operations across the world with these digital media platforms,” he said.

Chinese operations that are harassing defaulters can also blackmail them into becoming spies or involved in other criminal activities, such as smuggling or human trafficking.

“So, certainly, there is major espionage and a bigger geopolitical angle to this and it needs to be seriously looked into,” said Pandya, who authored the book “Radicalization in India.”

The issue of small loan apps penetrating the Indian market becomes a large-scale security threat for India. Because the apps are made-in-China, the personal information fed by the app users can thus feed metadata into the Chinese artificial intelligence system.

Prof. Madhav Nalapat, a New Delhi-based strategic analyst told The Epoch Times over the phone that the Chinese are developing artificial intelligence (AI) in a big way, and they want to use AI methods to promote their control within China as well as outside as well.

“Artificial intelligence is a machine fed by metadata. So India has been a very rich treasure trove of metadata for the Chinese, and the United States as well,” said Nalapat.

He described it as an irregular warfare tactic that aims at winning by using every means. “Oh, it’s a huge vulnerability for democracies, and therefore faultlines can be expanded significantly,” he said.