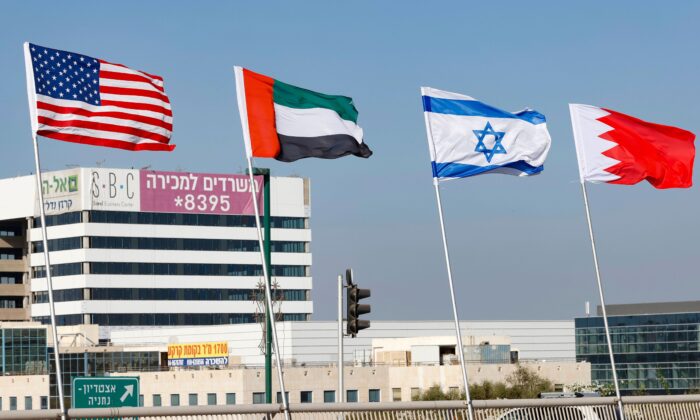 (L-R) The flags of the United States, the United Arab Emirates, Israel, and Bahrain are flown along a road in Netanya, Israel, on Sept. 13, 2020, marking the signing on Sept. 15 of the Abraham Accords Peace Agreement. (Jack Guez/AFP via Getty Images)
Viewpoints 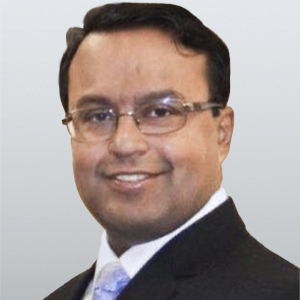 As the Russian invasion of Ukraine enters its seventh month, and the war in Donbas and Kherson turns into a prolonged meatgrinder, the world is waking up to a costly reality.

For the first time in many decades, a multipolar world order is emerging with a Moscow–Beijing alliance. This is leaving the rest of the world, especially the populous parts lying outside the NATO alliance, facing the need to recalibrate themselves to the vastly changed geopolitics, sanctions regimes, and supply chains. The new multipolar world order is not only challenging present-day relations and partnerships, but will also all bring forth opportunities for new alliances, renewed partnerships, and newer trade routes.

Maybe it was in preparation for these challenging times that, exactly a year after the signing of the Abraham Accords, on Nov. 13–14, 2021, an interesting set of leaders from Asia, Europe, and Africa met in Dubai for the 12th annual Sir Bani Yas Forum. Among the leaders were government representatives from the UAE, Saudi Arabia, Israel, Egypt, Greece, Cyprus, Jordan, and India.

The meeting paved the way for setting up the mechanics of a unique strategic powertrain—a powertrain that could lead to one of the most efficient, multimodal, and sustainable economic corridors of the 21st century.

The India–Arab–Mediterranean (Arab-Med) Corridor to Europe could radically reconfigure trade between the Indian Ocean region, the Middle East, and Europe. This is not the first time such a corridor has been envisioned. In fact, for most of recorded human history, the India–Arab–Mediterranean Corridor has been one of the mainstays of trans-civilizational commerce and the transfer of knowledge in science and philosophy.

One of the earliest written accounts of this corridor is found in the Greek text “Periplus Maris Erythraei” or the “Periplus of the Erythraean Sea.” Written in the middle of the first century Common Era (CE), nearly 1,400 years before Portuguese colonialist Vasco da Gama “discovered” a trade route to India around Africa, the “Periplus of the Erythraean Sea” was a guidebook for Greek merchants trading between Greece, Egypt, the Arabian Peninsula, and India. It primarily focuses on two trade routes originating in Greece and moving through land routes to ports in Egypt or via the Arabian Peninsula and the Persian Gulf to western India. For ancient Greek and Roman geographers, the Erythraean Sea incorporated the Red Sea, the Gulf of Aden, and the western Indian Ocean.

The historical corridor made sense for more than a millennium in a pre-Islamic world that was yet to be divided along globalized ideological and theological “no-go zones.” This corridor provided the most efficient and logical combination of sea and land routes between Europe and Asia, with opportunities for the most versatile north-south corridors along the route, into Africa and Eurasia, and East Asia.

Michael Tanchum, a professor of international relations of the Mediterranean, Middle East, and North Africa regions at the University of Navarra (Spain) and a non-resident fellow at the Middle East Institute in Washington, D.C., considers this new connectivity a strategic paradigm shift of enormous geopolitical consequence that could reshape India’s role in the Eurasian economic order. But this reshaping can only happen if there’s a seamless integration of India into the European Union (EU) value-chain market.

Tanchum writes (pdf): “India’s ability to integrate into an India-to-Europe Arab-Med Corridor depends fundamentally on how India manages its set of foreign partnerships to participate in the manufacturing value chains. The India-to-Europe Arab-Med Corridor presents New Delhi with unique opportunities that are highly conducive for value chain integration because of the existing synergies between India’s commercial ventures with its Arab Gulf partners and its commercial ventures with Israel.”

The Challenges of the Changing World Order

The new world order that’s emerging in the shadow of the Ukrainian conflict will have a generational impact on how the United States and European Union secure their supply chains. Dependence on China virtually leaves them hostage to geostrategic emasculation at the hands of the new Sino-Russo alliance, something that can be clearly seen in the short-term failure of the Western sanction regime against Russia.

To complicate things further, as the east–west overland Eurasian corridor falls victim to prolonged conflicts, its viability as a trade route will become increasingly inefficient. This, in conjunction with the normalization of diplomatic relations between the UAE, Saudi Arabia, and Israel in a post-Abraham Accords Middle East, for the first time allows a rail connection between the UAE via Saudi Arabia and Jordan to the Port of Haifa on Israel’s Mediterranean coast.

UAE’s Etihad Rail has recently completed an 86-mile track that connects the UAE with the Saudi Arabian Railway (SAR) network at Al-Ghuwaifat. This is a part of the ambitious Gulf Cooperation Council rail network on which work is underway and is expected to be operational by 2024. An 865-mile-long Saudi north-south line from Haradh in southeast Saudi Arabia via Al-Kharj, Riyadh, and Buraidah to Al-Haditha on the Saudi–Jordan border is already in place. A 186-mile stretch from Al-Haditha to Israel’s major port at Haifa is required, of which a 43-mile section from Beit She’an near the Israel–Jordan border to Haifa is already functional. The rest of the section will pass through Jordan, which could be a major beneficiary of the emerging corridor.

The establishment of this arc of transnational partnerships from Greece to India will come with its share of challenges and threats. The state-owned China Ocean Shipping Co. (COSCO) already owns a 60 percent share in the Greek railway company Piraeus Europe Asia Rail Logistics (PEARL). So, we can expect China to play a role in the management of at least some parts of the corridor. Given the fact that the Chinese Communist Party (CCP) sees this corridor as a direct challenge to its existing Belt and Road (BRI) network, it’s likely that China will make efforts to sabotage the India–Arab–Med Corridor. But there’s also a likelihood that China may see this corridor as an alternative network to those overland segments of the BRI that may get degraded or blocked by prolonged conflicts in Eurasia.

Other challenges are also likely to emerge as the corridor materializes. These would include economic challenges in financing the overland sections, geostrategic concerns that could impact the implementation of the Abraham Accords, as well as security concerns in the face of terror and extremist threats. Terror threats could emerge from Turkey’s caliphate ambitions and Pakistan’s efforts to act as the lynchpin between Turkey’s caliphate ambitions and China’s BRI.

India will also need to deal with a few challenges of its own. It will need to gradually grow beyond the food processing sector that is currently the centerpiece of India’s value chain integration in the India–Arab–Med Corridor to Europe. So far India has succeeded in bringing about a symbiosis between the Arab Gulf states’ strategic need to ensure their food security and India’s strategic need to increase the value of its food production. But eventually, India will have to strive to create an ecosystem of high-tech manufacturing that could replace China in the global supply chain. India’s program of Production-Linked Incentives (PLIs) to attract global majors to manufacture in India is likely to create a strong impetus in that direction. Europe and the United States, for their part, will also have to learn to accept the member states of this corridor as equal strategic partners instead of transactional allies.

A detailed study needs to be carried out soon that would examine the viability, impact, and trade potential of the corridor in comparison with established shipping routes. These analyses will help quantify the direct and indirect benefits of plugging more effectively into supply chains in the Middle East and Europe.

There will be geopolitical hindrances, economic challenges, and security imperatives to overcome, but the benefits of this new re-alignment in the medium and long term far outweigh the short-term challenges. If history and current events are any indication, the India–Arab–Israel–Med–Europe corridor is an idea whose time has come, again.

Utsav Chakrabarti
Follow
Utsav Chakrabarti is the executive Director of HinduPACT. An architect by profession, Utsav has been presenting new geostrategic opportunities to thought leaders in Washington, D.C. for over 18 years. An astute observer of geopolitical trends inside the Washington Beltway, his work has been presented to lawmakers on Capitol Hill and to representatives of the Human Rights Commission at the United Nations.