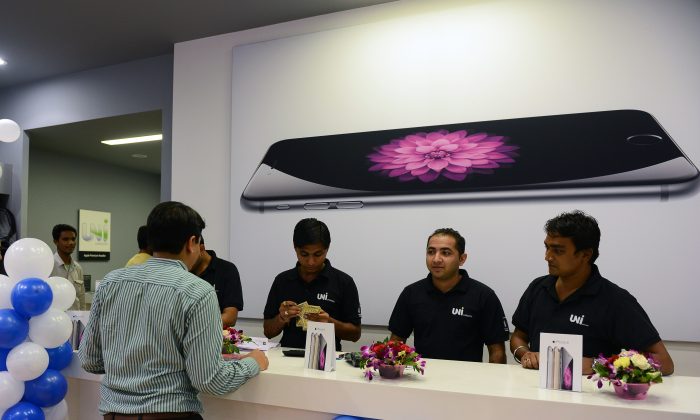 Apple currently sells its products through resellers in India but easing of restrictions may see the company soon opening stores in the world’s second most populous nation. (SAM PANTHAKY/AFP/Getty Images)
Asia & Pacific

India has announced sweeping moves to expand foreign investment in civil aviation, defence, and a string of other sectors as part of attempts to open up the economy.

The government eased restrictions on foreign direct investment (FDI) in nine areas as it looks to spur investment in the world’s second most populous country.

Prime Minister Narendra Modi tweeted that the “radical” changes would make “India the most open economy in the world for FDI” and were aimed at generating jobs for the country’s tens of millions of young people.

Commerce Minister Nirmala Sitharaman said the aim was to make it easier for overseas companies to manufacture in India, notorious for its red tape and labyrinthine regulations.

Under the changes, companies like Apple could move closer to opening stores in India after the government eased regulations on local sourcing.

Overseas companies will in future be allowed to own local airlines outright, compared to a previous 49 per cent cap, with government approval. Investment in building and modernising airports around the country will also be eased.

The cap on foreign investment in defence was raised to 100 per cent from 49 per cent, subject to government approval, in cases which give India access to modern technology.

“These are sectors in which India needs huge amounts of investment and the government’s assessment is that these sectors also need injections of new technology which will lead to productivity gains for the economy,” Devendra Kumar Pant, chief economist at India Ratings & Research in New Delhi, told AFP.

Central bank governor Raghuram Rajan, credited with helping to reform and revive the economy, announced at the weekend he would not seek a second term in September – raising concern among analysts about the government’s commitment to reform.

Modi stormed to power in 2014, promising an overhaul of the faltering economy. Shortly after taking the reins his government raised foreign investment caps in the defence and insurance sectors and for some railway projects.

Growth is now chugging along at 7.9 per cent, the fastest of any major economy.
But the government has been criticised for failing to implement major reforms to boost investment and help create jobs.

The announcements came after Modi chaired a meeting of his top officials on Monday, looking to increase foreign investment from the 55.46 billion dollars reached last financial year.

Single-brand foreign retailers can now operate stores for three years before having to comply with local sourcing rules – and for five years if they can prove their products are “cutting edge” or “state-of-the-art”.

Apple last month hit a roadblock in its plans after the government ruled it must buy at least 30 per cent of its parts locally if it wants to open stores in India.

The government also permitted 100 per cent FDI in teleports, direct-to-home and cable networks as well as mobile TV – without the need for government approval.

In the pharmaceuticals sector, it permitted foreign companies to own up to 74 per cent of brownfield or existing projects without the need for prior approval.

The changes to defence come after Modi vowed to end India’s status as the world’s number one defence importer. He wants 70 per cent of hardware to be manufactured domestically by the turn of the decade.

But defence companies have been reluctant to transfer some technology to local firms under the current rules.

The easing of rules in civil aviation come on the heels of a long-awaited policy announced last week aimed at making air travel affordable for millions of Indians.

India’s aviation sector has undergone rapid transformation since a liberalisation drive began in 2003, but most people still travel the vast country by rail and road.

“The opening of FDI will help bring in much-needed cash, aircraft fleet, and best practices. We may see its positive impact over the next 6 to 12 months,” said Amber Dubey, head of aerospace and defence at KPMG India.

“Foreign airlines can now focus on the customers and competition rather than wasting time on legal and regulatory issues.”