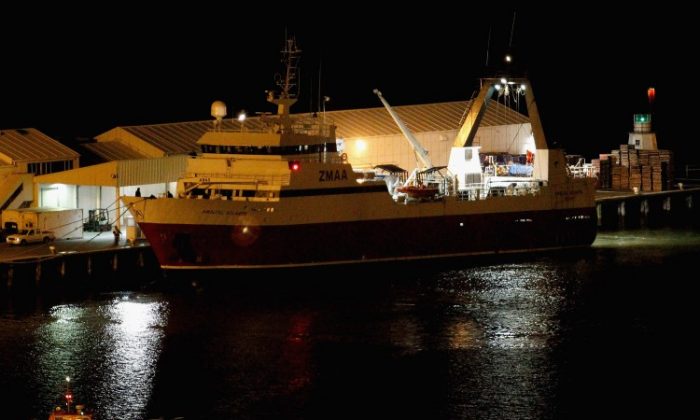 The Amaltal Atlantis carrying survivors from the sunken Oyang 70 fishing trawler arrives in Lyttlton on Aug. 20, 2010 in Christchurch. (Martin Hunter/Getty Images)
US

The integrity of the Observer Monitoring Programme on foreign charter fishing vessels operating in New Zealand waters must be kept as a core function of Government, say industry insiders.

“Outsourcing this role could lead to fishing companies being able to choose observers prepared to turn a blind eye in order to keep their jobs.”

Observers are placed on commercial fishing boats to ensure the laws surrounding fishing conditions are maintained and to record information relevant to Quota Management System (QMS). Up until now observers have not been required to report on the employment and work conditions of foreign crews.

The contracting out of the jobs of fisheries inspectors was raised in one of the recommendations in the February 2012 report that followed the Ministerial Inquiry into the Operation and Use of Foreign Charter Vessels (FCVs). The inquiry came after allegations last year of human rights abuses and unsafe conditions on Korean-owned fishing vessels.

The Oyang 70, an FCV owned and staffed by the Korean Sajo Oyang Corporation and chartered by Southern Storm Fishing, sank in New Zealand waters in August 2010-6 crew members drowned.

The 32 crew members from the Oyang 75 fled when it docked in Port Lyttelton in June 2011. The Indonesian fishermen claimed to have suffered inhumane treatment including mental and psychological abuse as well as the non-payment of wages, according to a report by the University of Auckland Business School.

The prospect that New Zealand’s reputation could be tarnished led to an inquiry recommendation that the “same minimum standards and rules regarding vessel safety, workplace conditions and fisheries regulations” should apply to all vessels fishing in New Zealand waters.

The contracting out of services was raised again last Sunday by Television New Zealand when they revealed a leaked email from the Ministry of Fisheries that suggested that the jobs of 70 observers might be outsourced by the end of the year.

The Ministry of Agriculture and Forestry (MAF) has called the report “misleading” and stated that outsourcing would not occur where a ‘high risk’ existed and only in cases where it would be cost effective and the standard of service upheld.

“At this stage there’s still more work to be done as to how best to deliver observer services on foreign charter vessels and other vessels. No decision has been made about outsourcing,” Minister for Primary Industries, David Carter told TVNZ last Sunday.

Joe Fleetwood, Maritime Union General Secretary says the programme must remain under a Government department with stricter rules and regulations.

He insists that four inspectors should be placed on each boat for safety reasons with two on duty per 12-hour shift. The inquiry panel has recommended that one observer be put on each FCV.

“There have been cases of threats made to the inspectors … A lot of them go on with Russian, Korean, Chinese, Philipino, or Indonesian crews. You have a crew of about 40 or 50 or more …and then you have one inspector.

“If the company can pick and choose who provides the observer role, then it will be to the detriment of the industry and those who work in it,” said Mr. Fleetwood.

“Contracted out observers will simply become like many of the other workers out there on the ships-bullied and not able to do their job properly.”

Reports of the exploitation of foreign crews, has prompted two of the biggest US supermarket chains, Walmart and Safeway, to begin an investigation into their imports of New Zealand fish, says the Businessweek.

“FCVs act largely in a regulatory and compliance vacuum which leads to undesirable exploitative practices and a distorted playing field for New Zealand crew vessels, the Nelson-based seafood and fishing company, Talley’s Group told the inquiry.

“Most of the catch from FCVs is processed in China with slave labour then resold into the World Market as Produce of New Zealand. This product is sold into direct competition with seafood caught and processed by New Zealanders.”

The seafood industry in New Zealand is worth around $1.5 billion per year.