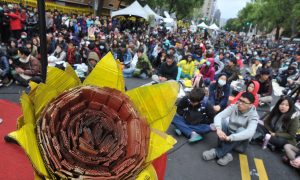 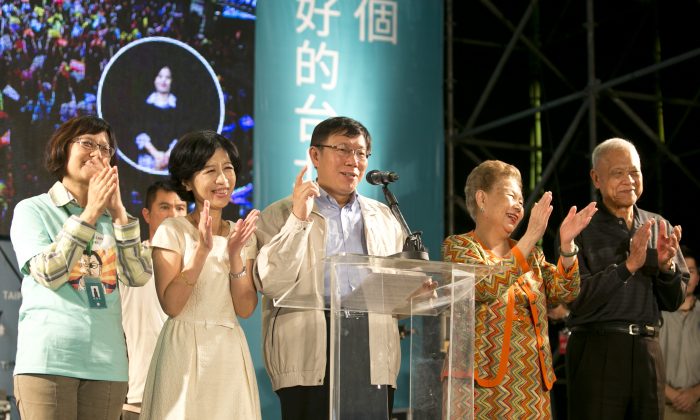 Independent Taipei mayor-elect Ko Wen-je celebrates his victory in the 2014 Taipei mayoral elections at his headquarters on Nov. 29, 2014, in Taipei, Taiwan. Millions of voters went to the polls for the island's largest ever local elections, as the Democratic Progressive Party defeated the ruling Nationalist Party in 16 out of 22 county elections. (Ashley Pon/Getty Images)
Asia & Pacific

In electing Dr. Ko Wen-je as their mayor on Nov. 29, Taipei voters broke out of the political mold that has dominated Taiwanese elections for the last three decades. Ko’s victory by a resounding 850,000 votes over Sean Lien of the Nationalist Party (KMT) was only one piece of bad news for the ruling KMT Party.

While Taiwan’s politics have been almost exclusively a two-party affair, with the KMT facing off against the Democratic Progressive Party (DPP), Ko ran as an independent.

In his acceptance speech, Ko thanked the people of Taipei and stated that democracy means government by the people. Facing an opponent with ample financial and political support, Ko Wen-je found himself in an uphill battle.

Ko’s candidacy featured a high degree of transparency — all campaign costs were publicized online, and sponsorship was kept capped at the legal limit. According to Ko, excessive campaign spending would only cause damage to the overall electoral process.

A physician and professor at various Taiwanese health and educational institutions, Ko was responsible for implementing an American-style Integrated Care system at the hospital of National Taiwan University. In November 2010, Ko directed an emergency team that treated his future political opponent, Sean Lien, for gunshot wounds.

The loss of Taipei comes as a major blow to the KMT, for which the city is a traditional stronghold. In this round of nationwide local elections, held across Taiwan’s 22 county-level divisions, the KMT won only 6 regions compared with 13 by the pro-independence Democratic Progressive Party. It is the worst result suffered by the KMT since 1997.

In a press conference, Premier Jiang Yi-huah (KMT) declared his intent to resign, saying that the election results clearly voiced popular discontent towards the KMT administration.

“The results of this election,” he said, “show that the [KMT] administration’s policies have failed to gain traction with the people, and the popular voice is cleared reflected in their ballots.”

Attitudes among the Taiwanese populace have been shifting with developments in the island’s leadership and foreign policy, particular in regards to relations with mainland China.

In March, the Sunflower Movement, driven by student and civic groups, occupied Taiwan’s Legislative and Executive Yuan (Taiwan’s national legislature) in response to a would-be trade deal with the communist regime that many perceived to be detrimental to Taiwan’s economic independence.

Yuan Hongbing, former law professor at Beijing University, told New Tang Dynasty Television that the “crushing defeat” of the KMT in this round of elections was “a slap on the face to the Chinese regime’s united front strategy” in the Taiwanese political scene. The Chinese Communist Party (CCP) has since its inception employed a united front strategy, in which organizations or individuals who are not part of the CCP are used to advance the CCP’s goals.

“The people of Taiwan,” Yuan said, “have told the [Chinese] Communist Party that they can buy out the KMT leaders and big financial groups, but not the Taiwanese people.”