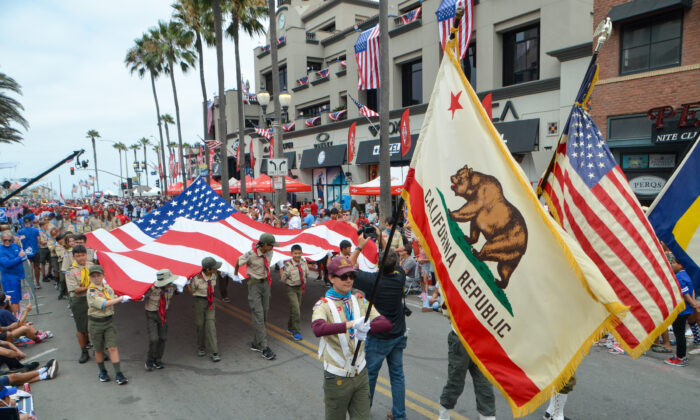 HUNTINGTON BEACH, Calif.—Thousands of residents gathered on the streets of Surf City on July 4 to welcome back its annual parade after a two-year pause for the pandemic.

The Huntington Beach parade is the longest-running Fourth of July parade west of the Mississippi and has become a popular Orange County tradition. This summer it returned for its 118th year.

“Every year I look forward to the Fourth of July in Surf City, and I am confident that there will be something here for everyone to enjoy over the long holiday weekend,” Mayor Barbara Delgleize told The Epoch Times.

“It’s nice to see everybody come out and enjoy Huntington Beach,” said Jake Saenz, a resident of Corona, told NTD.

Don Johnson, a resident of Huntington Beach since 1966, said he enjoyed seeing different groups and all the patriots come together.

“We love that we see all of our friends, and we just love everybody coming out to support America and our freedom,” he said to NTD.

Jack Rice, a member of the veteran organization American Legion Post 133, said the group invited World War II veterans to participate in the parade. He said it’s significant to have them recognized for their service.

“It’s very emotional for us, because we finally get some recognition, and being veterans, the sacrifices that were made by these people are very special,” said Rice to NTD.

One of the largest groups in the parade was led by a group of adherents of the spiritual discipline Falun Gong, a practice of meditative exercises with an emphasis on moral character that originated in China. Their bright yellow shirts and colorful banners made them stand out as they marched toward Yorktown Avenue.

Millions of Falun Gong practitioners were arrested and tortured after the Chinese Communist Party launched a large-scale persecution in July 1999 with the aim of crushing the spiritual movement.

“We’re representing Falun Dafa being truthful, compassionate, and tolerant. We also want the world to know that the persecution is [still] happening in China,” Jin told NTD.