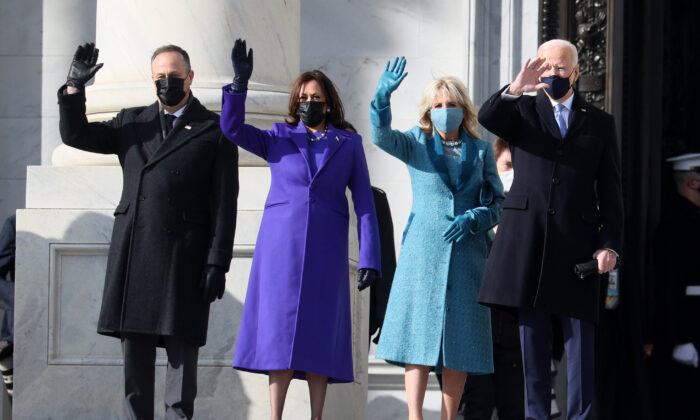 (L-R) Doug Emhoff, Vice President-elect Kamala Harris, Jill Biden, and President-elect Joe Biden wave as they arrive on the East Front of the U.S. Capitol for the inauguration in Washington on Jan. 20, 2021. (Joe Raedle/Getty Images)
Viewpoints

Independence Day After the Election of 2020

Over the years, July 4 has grown to become a universal celebration of freedom—even to us Brits. But if the election of 2020 was rigged, Americans are now back in the situation of being taxed without legitimate representation.

I have to say, given the efforts exerted to shut down genuine concerns about possible voter fraud, I’m with President Donald Trump on that one. I think it was rigged, but obviously I have no proof.

But how does a guy who hardly left his basement beat the incumbent who was—and still is—filling stadiums all over the country?

After Joe Biden’s inauguration, I shared a copy of the picture above to a reporter friend of mine saying how it reminded me of an old Western movie where the bad guys donned black masks before raiding a bank.

The crime—if it happened—would have taken place 11 weeks before this picture was taken, making this the “we-got-away-with-it” parade.

In 1785, nine years after Thomas Jefferson co-authored the Declaration of Independence, he wrote to his former student and future fellow president James Monroe: “How little do my countrymen know what precious blessings they are in possession of, and which no other people on earth enjoy.”

If the 2020 election was rigged, the conspirators must have been hoping the same would hold true 235 years later.

But, deep down, the architects of such an alleged scam would probably be wondering now if it was worth all the effort and risk after Biden’s job approval ratings dropped to 31 percent last week.

Hardly surprising after his disastrous decision to give away 20 years of U.S. blood and treasure in Afghanistan last summer. And now his latest foreign policy blunder aimed at getting Ukraine into NATO, which has resulted in gas prices reaching above $5 per gallon, and the post-lockdown supply chain crisis getting much worse. Not to mention all the unnecessary death and destruction that has taken place in that geographically unfortunate land.

It seems Biden ignored the advice of his new CIA chief, William J. Burns, who first warned of Russian “hostility” to NATO expansion eastwards in 1995.

Later, while serving as U.S. ambassador to Russia in 2008, he cautioned Republican Secretary of State Condoleezza Rice: “Ukrainian entry into NATO is the brightest of all redlines for the Russian elite (not just Putin). … I have yet to find anyone who views Ukraine in NATO as anything other than a direct challenge to Russian interests.”

Either that or they have both gone loco.

Time for a Revamp?

It must have really hurt the Democrats that they couldn’t stop Roe v. Wade from being overturned on their watch. But it does show they don’t control the Supreme Court, even though it was beginning to look that way after the justices refused to intervene in the electoral and constitutional anomalies of the 2020 election.

Biden now views abortion as a chance to restore his fortunes and is asking voters to elect more pro-choice lawmakers (i.e., Democrats) to the House and Senate in November.

But, failing that, and as a way out of the legal and political reckoning that may be coming their way if the last election is ever challenged, they could always reinvent themselves as a pro-life party. Unlikely? Well, the Civil Rights Bill passed by President Lyndon B. Johnson in 1964 transformed the former slave-owning-turned-segregationist party into the first choice for most African-Americans.

Never underestimate the Democratic National Committee’s resourcefulness. It looked to be all over for them in 1865 when their Confederate forces surrendered. Yet just six days later, their man was in the White House after Democrat-voting John Wilkes-Booth assassinated Abraham Lincoln.

The problem America and most democratic nations face is that only one of the two major parties fundamentally believes in democracy. Socialist politicians see themselves as the educated vanguard of the ignorant masses. This is a leftover of Marxism, but old habits die hard.

Democracy in all its guises—whether as a constitutional monarchy like the UK that doesn’t even have a set constitution, or a constitutional republic like America that does—enables free and fair elections that allow people to choose how they want to be led and by whom. It might be a limited choice, but it’s the difference between living in a free state or a tyranny.

It’s true that in most democratic elections socialists cede power peacefully, but as conservative parties have largely moved to the center-left, they know their agenda will continue regardless.

That changed in 2016 with the election of Trump, who stood for everything they oppose, and their hatred went visceral. The Deep State was not keen to let that happen again in 2020, but was that probable cause for throwing an election? The establishment thought not.

Since the War of Independence, America’s armed forces have successfully protected it from external threats, but what happens when the threat comes from the inside—if government agencies go constitutionally rogue against a sitting president?

The Judo Defence: Using the Opponents’ Anger Against Them

The right to peaceful protest is a fundamental aspect of living in a free society, and that is how Jan. 6 began. If an election heist did take place, those who masterminded it would have anticipated that and maybe worse.

In fact, a lot worse would suit their purposes just fine. A Republican-led—even better, Trump-led—attack on the seat of government would shift the focus from accusations of Democrat election tampering to the Democrats defending democracy itself.

It could also land their arch nemesis in jail, so what’s not to like—I mean, be outraged about?

But what if the Democrats lose the November midterms, giving Republicans control of the House and Senate as well as the important investigative committees? If the Democrats have been up to dirty tricks, will desperate times call for desperate measures once again?

Whatever the outcome, the 2022 election must be seen to have been conducted fairly. If not, it will surely be time to stop celebrating Independence Day.