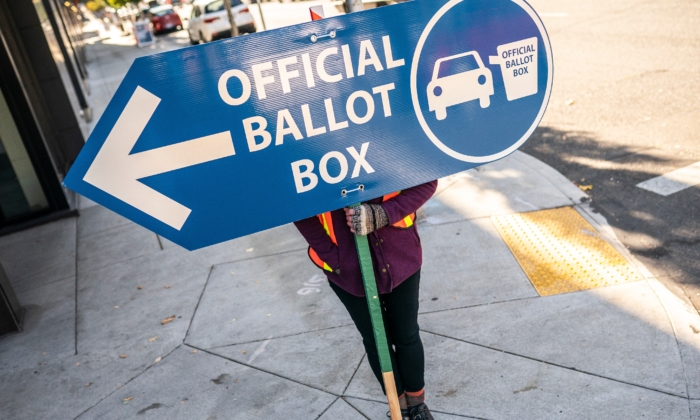 An election worker directs voters to a ballot drop off location in Portland, Oregon, on Nov. 2, 2020. (Nathan Howard/Getty Images)
US News

Of the only two contested district attorney races in Oregon, both incumbents won reelections against progressive challengers backed by a wealthy Portland donor.

In Washington County, the second populous county of Oregon, District Attorney Kevin Barton defeated Brian Decker in the nonpartisan race held on May 17.

Decker, a public defender, ran on a progressive platform to decrease the jail population and direct more people to treatment programs. He said on the campaign trail that lockup measures cause people to lose housing, adding fuel to the homelessness crisis—which he considered to be the top issue in the county.

“We’ve all seen what happens when a public safety system fails in Portland, and we cannot let that happen here. My priority as DA [district attorney] is keeping our Washington County community safe,” Barton wrote on his campaign’s Facebook account.

Portland, where a high-profile autonomous zone was set up during the height of the George Floyd protests, sits just east of Washington County.

In his failed bid, Decker outspent Barton by $62,000 in 2022. His top donor was Aaron Boonshoft, a Portland inventor with a record of financing initiatives to decriminalize sex work. Boonshoft gave Decker $225,000, accounting for almost half the money raised by Decker this year, according to financial disclosures published by the Oregon Secretary of State’s Office.

Clarkson won with a total of 32,466 votes, or 52 percent, compared to Todd’s 29,574 votes, according to the unofficial election results published by Marion County.

“I am truly honored to continue serving the people of Marion County,” Paige said in a statement. “For the first time in nearly 40 years, we had a stark choice in this election for District Attorney, and it is humbling to know voters want me to continue standing up to crime and working hard for victims.”

A career prosecutor, Clarkson campaigned on holding criminals accountable through proper prosecutions. In a scathing op-ed published weeks ahead of the election, she blamed the state’s rising crime on progressive laws.

In the past three years, Oregon lawmakers passed laws to restrict police officers’ ability to make traffic stops, end the death penalty, and make it harder to prosecute the most violent juvenile offenders as adults.

Todd supported a shift away from “tough-on-crime” policies, according to his campaign website. He wanted to push for prosecution policies that rely less on prisons and more on social services.

Todd spent $251,398 in 2022, outspending Clarkson by a third. His top donor was Boonshoft at $50,000, according to financial disclosures published by the Oregon Secretary of State’s Office.

The rest of the district attorney races in Oregon were uncontested.