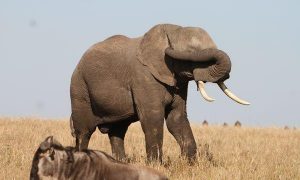 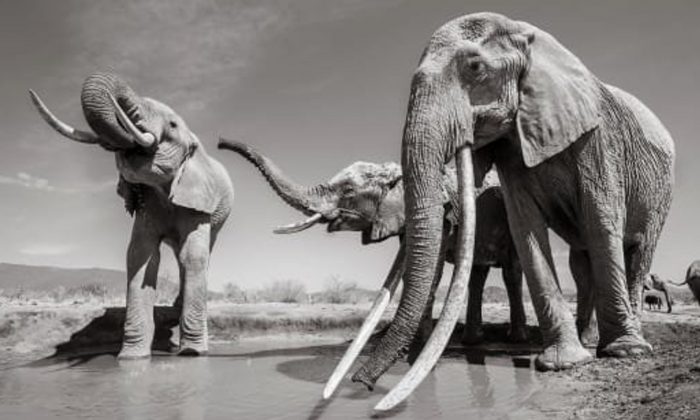 These elephants are increasingly rare, it's estimated that fewer than 20 remain in Africa. (Courtesy Will Burrard-Lucas)
Africa

Towering high above the Kenyan landscape, this female elephant is huge, her long tusks curving right down to the ground.

Known as a “big tusker” she’s a rare and extraordinary sight—it’s estimated that fewer than 30 of these animals still exist in Africa.

British photographer Will Burrard-Lucas captured a series of black-and-white photographs of this animal—that he calls the Elephant Queen—roaming in the natural landscape around Kenya’s Tsavo National Park.

“Her tusks were so long that they scraped the ground in front of her as she walked. She was like a relic from a bygone era.”
Simply the most wonderful creature…#LandofGiantsBook pic.twitter.com/C0YyK0Bivc

He took the images in partnership with the Tsavo Trust, a local not-for-profit group, over a few visits in the hope of raising awareness about the animals.

“It was just incredible,” Burrard-Lucas tells CNN Travel. “Especially in this day and age where these elephants with long tusks are so rare.”

Burrard-Lucas spent some time living in Tanzania as a child, which sparked his interest in wildlife photography.

“My earliest memories are of safari and wildlife and ever since those days I’ve had this passion for the natural world,” he says.

He took the images of the elephant with a contraption known as the “Beetlecam” which allows him to get close-up photographs of wildlife in its natural habitat.

Shooting the Last Photos of the Rare ‘Queen of the Elephants’ https://t.co/Av3XEUSUGn

“Over the years I’ve used it on various projects, and for this project, it’s really to show and emphasize the size of these animals,” he adds.

“I hope people are inspired to care about the natural world and if they want to, to support organizations like the Tsavo Trust who are working so well to keep these animals protected.”

The photographs will be the subject of a book—conceived by the Tsavo Trust as a means of raising awareness and funds—called “Land of Giants” and featuring 150 shots of the elephants of Tsavo.

The main subject of Burrard-Lucas’ photographs is an elephant known as F_MU1—shortly after he took his last shot, she died of natural causes.

In a post on his blog, the photographer says F_MU1 had experienced periods of poaching and it’s a miracle she lived through these traumatic experiences.

“I find [the photos] inspiring to look at because it’s just very positive and inspiring to think that elephants like this are still out there—they haven’t been hunted or poached,” he says.

The Tsavo Trust works together with the Kenya Wildlife Service to provide support in conservation efforts—including anti-poaching patrols.

This isn’t the first time Burrard-Lucas’ photos have hit the headlines—he previously took a photograph of a rare black leopard, which was shared widely online.

The photographer says that elephants with tusks like the one are even rarer than the black leopard.