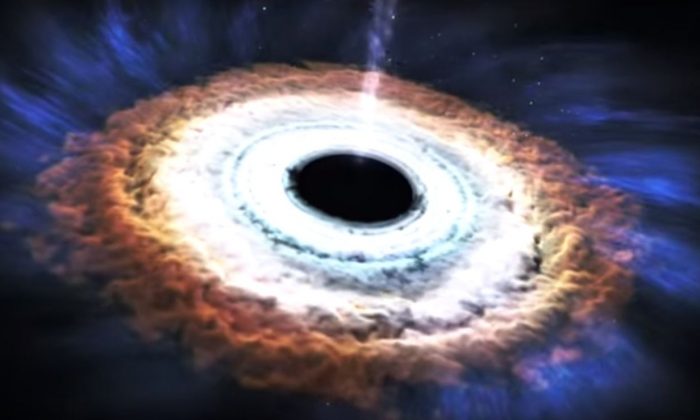 An amazing piece of animation, created by none other than NASA, gives viewers an idea of what it looks like when a black hole destroys a star.

The video, released last week, shows when a star “wanders too close” to the singularity.

“In these events, called ‘tidal disruptions,’ some of the stellar debris is flung outward at high speed while the rest falls toward the black hole. This causes a distinct X-ray flare that can last for a few years,” NASA states.

A NASA X-ray observatory obtained different pieces of data in a “tidal disruption event” in November 2014. “The event occurred near a supermassive black hole estimated to weigh a few million times the mass of the sun in the center of PGC 043234, a galaxy that lies about 290 million light-years away,” the space agency adds.

“During the tidal disruption event, filaments containing much of the star’s mass fall toward the black hole. Eventually these gaseous filaments merge into a smooth, hot disk glowing brightly in X-rays. As the disk forms, its central region heats up tremendously, which drives a flow of material, called a wind, away from the disk,” it says.

NASA used the event to test various models on how black holes affect their surroundings in space.