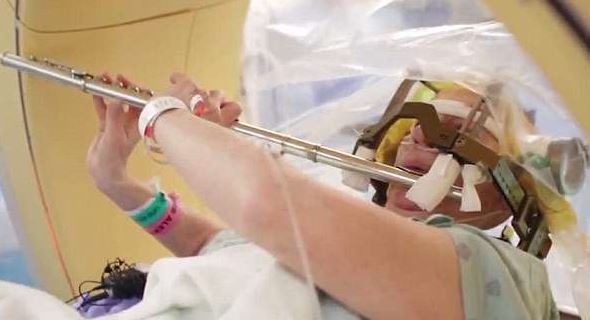 Incredible Moment: Woman Plays the Flute in the Middle of Her Major Brain Surgery at Texas Hospital

A woman played the flute while in a Texas hospital getting brain surgery done, and the moment was captured on camera.

A video also emerged, shot by a staff member at Memorial Hermann Hospital in Houston on Tuesday, March 27.

Anna Henry, the patient, is a professional flutist.

Henry suffers from a hereditary condition that causes hand tremors, which can sometimes disrupt her ability to play the instrument.

Doctors performed a deep brain stimulation procedure that featured them planting electrodes in an effort to help reduce the tremors and improve Henry’s life.

To test her abilities after some of the work was done, Henry was handed a flute and played for a bit.

Her performance enabled doctors to see how they were progressing and to make any adjustments that were needed.

Doctors and nurses applauded at the end of the performance.

The type of brain surgery also requires patients to be awake.

“It is brain surgery, but it’s a way we can really improve a patient’s life, quality of life, where otherwise they’re going to be on medications that may have a modest effect on improving their tremor,” Dr. Albert Fenoy, neurosurgeon with the Mischer Neuroscience Institute at Memorial Hermann and UTHealth, told KHOU. “Deep brain stimulation is a really fantastic tool in how we can modulate a perturbed, dysfunctional system in the brain and make it more normal.”

Henry, currently the principal flutist with the Big Spring Symphony Orchestra, said that the condition has started impacting her musical career significantly, so she felt something had to be done. In a recent concert, she had to have her arm in a sling to keep it steady enough.

“I can fight it, but I’m tired of doing it. And it is getting worse. I know it’s a matter of either admitting I can’t do it anymore, or doing this [surgery] so that I can,” she said.

Henry told ABC 6 that the operation seems to be a success.

“The tremors are greatly reduced,” she said.

She’s now resting at her hotel before returning to Lubbock this weekend.