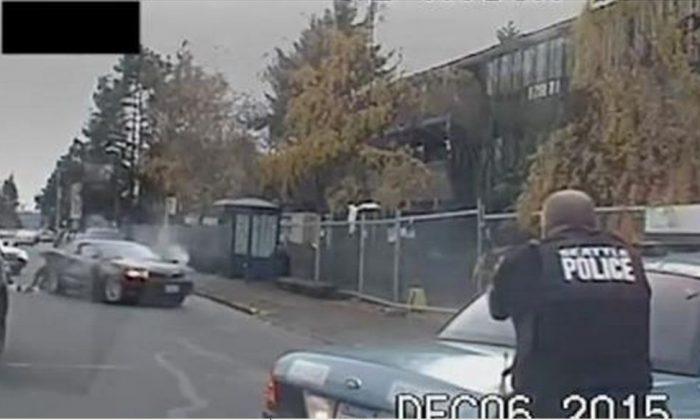 The Seattle Police Department released a video from an alleged carjacker’s confrontation with officers and the ensuing chase and shootout.

The Seattle Times reported that the suspect has been identified as Raymond Azevedo, a 35-year-old Pierce County resident who served time in prison. Here’s the video (warning: the footage might be disturbing for some viewers; also strong language is used):

The chase started downtown before winding through Montlake, Ravenna and Wedgwood neighborhoods.

“Seattle Police Department investigators are piecing together the trail of a 35-year-old violent felon after he brandished two handguns at several downtown businesses Sunday, carjacked three vehicles and fired on officers before a fatal confrontation with police in Northeast Seattle,” according to the video’s caption.

A total of 12 officers are on paid administrative leave pending an investigation. At least 11 officers opened fire on Azevedo.

Police said they found two guns on Azevedo, who had prior convictions for second-degree unlawful possession of a firearm, first-degree malicious mischief, attempting to elude police and third-degree assault of law enforcement, a corrections spokesman told the Times.

Due to his past criminal history, he was barred from legally possessing a handgun.

No one else was hurt in the chase or ensuing shootout.

Officials got a call from a coffee shop in Seattle’s Pike Place Market at around 12:35 p.m. local time (3:35 p.m. ET) after police noticed a “sweating” suspect who was “acting nervously.”

“He began manipulating a handgun in his pocket, leading employees to call 911,” police told NBC News.

“The pursuit ended in the Wedgwood neighborhood, where officers collided head-on with the suspect’s Camaro,” according to police. “An uninvolved motorist’s SUV was also struck during the incident.”

“The suspect reportedly pointed his gun at officers and began maneuvering the Camaro towards police, who opened fire,” police added.