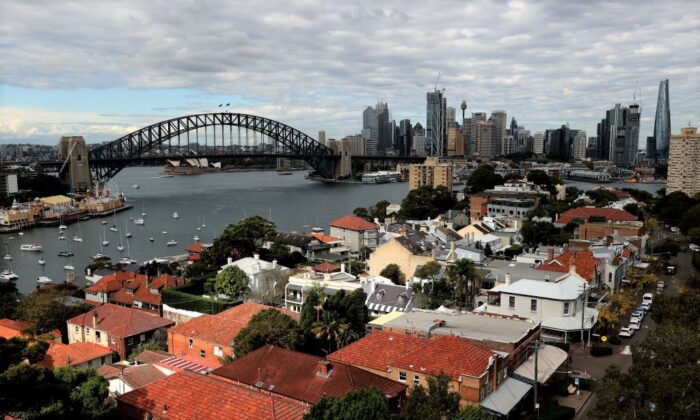 A general view of homes in McMahons Point in Sydney, Australia, on May 5, 2022. (Brendon Thorne/Getty Images)
Viewpoints

Over the past decade in Australia, we have had a series of governments delivering disappointing policies. Unfortunately, I expect this disappointment will continue with the new Labor government. One case in point: their housing policy was announced during the most recent election campaign.

The Labor Party’s shared equity scheme is yet another poor federal government housing policy that fails to tackle the fundamental cause of Australia’s affordability problem.

Housing affordability has been at the forefront of Australian public policy for years. Studies show that the deposit is the single biggest hurdle for prospective homebuyers. According to the Grattan Institute, in the early 1990s, it took six years to save a 20 percent deposit on an average home—today, it takes 10 years.

In response, the federal government has consistently intervened to try to help first-home buyers get their foot in the door of the market. Recent research from the Australian Housing and Urban Research Institute showed that Australian governments had spent more than $20.5 billion (US$14 billion) on first home buyer schemes in the past decade.

Unsurprisingly, these policies have been the result of electioneering with little to show for the billions spent. Although politically attractive, whether it be the former government’s First Home Loan Deposit Scheme (allowing first home buyers to buy a home with a five percent deposit guaranteeing the difference), their proposed Super Home Buyer Scheme (allowing homebuyers to use up to $50,000 of their superannuation towards a deposit) or the current government’s shared equity scheme, in reality, these housing subsidies worsen affordability in the long run.

For years, both political parties have done a disservice to young people aspiring for a core part of the Australian dream.

It is not just the federal government’s fault, however. There are two parts to the story.

One, the federal government has been trying to improve affordability by adding to the demand for housing (even relative to other developed countries, Australia provides an unusually large amount of demand-side support). And two, state and local governments have failed to address the fundamental issue that chronically restricts the supply of housing: onerous zoning and planning regulations.

Based on first principles, when you add to the demand for housing without doing anything to expand supply, the only direction for prices to go is up.

Research shows that zoning contributes about half of what Australians pay for their homes. The Organisation for Economic Development (OECD) cited such planning laws as the primary reason why Australia has such an unusually high inelasticity of housing supply. In other words, changes in the price of housing have little impact on the quantity of housing supplied.

Improving housing affordability by increasing supply through deregulating planning laws is well established and supported by a range of comprehensive reports from the Productivity Commission, Grattan Institute, and the Centre for Independent Studies.

Case studies from around the world also demonstrate the benefits of tackling housing supply to improve affordability. When Tokyo liberalised its planning laws, housing became more affordable, and homelessness fell dramatically. It is also no coincidence that districts in the United States with the least onerous zoning laws have the most affordable housing.

Bringing Back the Australian Dream

It is clear that reforming our planning laws to increase housing supply is the key to affordability. The evidence is overwhelming.

But before that can happen, we also need to leave the usual scapegoats behind. The insistence of some commentators in the media to focus on abolishing negative gearing is an example of such a scapegoat.

Studies show this policy will make a minor difference to house prices. The econometric modelling indicates negative gearing only contributes about four percent to house prices. Even in markets with a heavy concentration of investors, the maximum price fall would be seven percent.

So, what should be done? The federal government should resist expanding schemes that serve only to inflate the demand for housing.

Meanwhile, state and local governments should aggressively pursue supply-side reform by cutting planning red tape. This means increasing height caps in cities, streamlining administrative processes for construction, and allowing higher-density housing (apartments and townhouses) to be built in areas where only low density is permitted.

Committing to this process would make the housing supply more responsive to demand, bringing the dream of home ownership back into arms reach of aspiring home buyers.