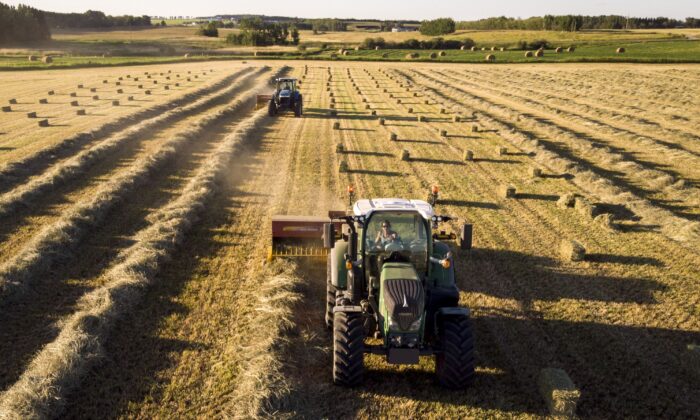 Farmers are facing increased input costs as they seed their crops this spring, an obstacle that is affecting how they approach operations and that will likely mean higher food prices down the road.

“These critical inputs for farmers are on average about $1,500 US a ton, which is five times what it was twelve months ago. Farmers need fertilizers to produce crops, but the market is controlled by a handful of very avaricious multinationals who supply-manage their products to artificially boost fertilizer prices. Some of them are in Canada,” Charlebois said by email.

He said challenges with supply chains have driven up the price of fertilizer, while Russia’s invasion of Ukraine has not only also increased the price but made fertilizer harder for Canadian farmers to get.

“Many farmers are even paying tariffs on fertilizers, 35 percent in some cases [such as imports from Russia]. Even surcharges are added these days. In fact, some farmers are even purchasing without knowing what the price will be, if they decide to commit.”

Thirty-five percent tariffs were applied to Russian imports of fertilizer.

Many prairie farmers endured a drought last year, but even those who did not are faced with higher costs for seed, fertilizer, chemical sprays, and fuel for farm machinery. Farmers are having to choose whether to save money on spray and fertilizer despite a likelihood of reduced yields, or to maintain standard input levels at a cost that could pay off if commodity prices are high enough.

“I already booked my chemicals back in February when chatter of low supplies was going around,” Loewen said.

“I’m staying at the same fertilizer level growing barley and canola. Supposedly I will be covered for the quantity I need.”

Near Lucky Lake, Saskatchewan, Ben Settler has noticed the higher prices for the weedkiller glyphosate and fertilizing nitrogen.

“Glyphosate has doubled in price if you can get it; nitrogen is well over double. But wheat and flax have both doubled too, and stuff like mustard is six or seven times what it was a year ago. It’s a wild time to be a farmer,” Settler said.

“We are applying less fertilizer but that’s more due to the drought. If rain comes in June we will try to apply more to cash in on the higher prices. I am using less glyphosate due to cost and lack of availability.”

Michael Harden says he will cut down on fertilizer applications on his farm near Rockglen, Saskatchewan.

“Shortages and minimal fertilizer are adding huge cost to inputs. It’s going to be less of a yield no matter what happens,” Harden said.

“We bought last fall. We got most of what we wanted but we didn’t go crazy because of cost. We would be using more if it wasn’t so high.”

Todd Lewis, second vice-president of the Canadian Federation of Agriculture (CFA), said the daunting challenges for producers beg for solutions. He said his organization is “extremely concerned” about the rising costs of fertilizer and also the availability of fertilizer and other critical inputs needed to support Canadian food production in the coming years.

“Despite high commodity prices, the skyrocketing costs of producing food and supply chain disruptions resulting from the conflict in Ukraine put immense pressure on margins while introducing significant uncertainty and volatility that are difficult for farmers to manage,” Lewis said in a statement emailed to Epoch Times.

“CFA has been in close contact with the government to raise these concerns and highlight the importance of working with farmers to find solutions to concerns around the current accessibility of these products, but also to approach longer-term concerns strategically so we can mitigate future challenges.”

On all indexes, the price of oil has roughly doubled since Dec. 1, 2021. Higher fuel prices are both a direct and indirect reason for the increased expenditures on the farm—expenses that will be passed on to consumers.

“Fuel costs are impacting the entire economy including food, and we expect the food inflation to continue to rise for the remainder of the year,” said Charlebois.

“Part of the reason that the recession eased off was the oil price dropped to nothing. When oil prices go up, it’s like a tax on everything to slow the economy down. But what we have right now is a strange situation of the prices going up, [while] everybody’s wanting to get more for what they’re selling or doing, including wages,” Prentice explained.

“The interest rate is shooting up with inflation, and I think there’s a real risk of what was called stagflation [in the 1970s] where we stopped getting growth and we have inflation with it. So, the pandemic was like an uncontrolled experiment. What happens when you turn the economy off, and you try and turn it back on again?”