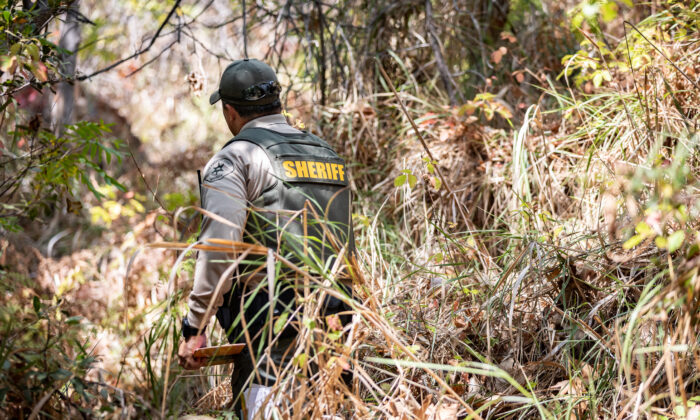 LOS ANGELES—An increase in law enforcement activity in Los Angeles County has resulted in a decrease in illegal marijuana cultivation sites, according to the sheriff’s department (LASD).

The LASD has been cracking down on illegal marijuana farms—also known as “grows”—in the Antelope Valley amid concerns of water theft and criminal activity among residents in Northern Los Angeles County communities.

According to the LASD Narcotics Bureau, the department has issued 160 marijuana cultivation-related search warrants, arrested 107 suspects on misdemeanor charges, arrested seven people on felony charges, and seized 53 firearms and 15,000 pounds of harvested marijuana during the first four months of this year.

During the same time frame in 2021, 387 search warrants were issued, 301 arrests were made, 105 firearms were recovered, and 62,000 pounds of harvested marijuana were confiscated.

The LASD collaborated with the California National Guard Counterdrug Task Force and the California Department of Fish and Wildlife to identify 350 outdoor illegal marijuana growing operations in the Antelope Valley this year, down from the 750 identified in 2021, Sheriff Alex Villanueva said.

“This reduction in cultivation sites is directly related to increased enforcement activity here in the Antelope Valley,” Villanueva said during a May 17 press conference.

Investigators are currently in the process of serving search warrants to 80 percent of the 350 identified illegal marijuana sites, with a goal of 100 percent eradication by the fall.

“This is a real incredible threat,” Villanueva said. “The threat to the environment and wildlife cannot begin to be calculated as growers consistently use banned pesticides and fertilizers.”

Villanueva said harvested marijuana in illegal grows are laced with banned substances that cause a health risk to unsuspecting medicinal and recreational users of cannabis, who might buy it on the black market.

Water theft continues to be a cause of concern for residents and farmers in the eastern region of the Antelope Valley, too, as the state has limited each household to one day per week of outdoor watering.

To stay under the radar, illegal farms avoid using legitimate sources of running water and instead drill wells into the ground or truck stolen water in from other areas to cultivate their crops.

“In a state with a significant drought, water used for illegal cannabis crops is alarming,” Villanueva said. “Unpermitted water wells are being drilled which threatens the underground aquifers.”

On average, marijuana farms require a minimum of three gallons of water per plant per day. Villanueva said the illegal grows in 2021 used 150 million gallons of water to bring those crops to harvest.

The environmental effect of the growing operations is also devastating, as mounds of trash are often left behind. As search warrants were conducted, investigators found pesticides, fertilizers, water appliances, lighting and electrical equipment, and “generators leaking diesel fuel and oils directly into the ground, contaminating the underground area.”

Supervisor Kathryn Barger is a strong advocate for measures that will prevent further expansion of illegal marijuana farms throughout her district, her spokesperson, Helen Chavez told reporters recently.

“This peaceful desert community has been disrupted,” Chavez said. “Illegal outdoor grows and indoor grow houses have sprouted and taken root here due to the predatory practices of illegal cannabis cultivators.”

To further deter illegal marijuana cultivators, Barger recently increased penalties for illegal outdoor and indoor farms amounting to $30,000 per day, one of the highest punishments for illegal operations in the state. The funds collected go directly towards future enforcement activities, Chavez said.

Palmdale Mayor Steve Hofbauer called the illegal grows “a big problem” that impacts public safety, especially for minors, who may purchase marijuana on the black market.

“The impact to our kids, when they end up smoking something that’s got pesticides, and some of the organophosphates and things like that in there, that’s not good,” he said.

Antelope Valley isn’t alone. According to the California Water Board, 80 percent of California’s 30,000 marijuana farms are illegal. But a majority of penalties only amount to a $500 fine and a misdemeanor.

To rally further support, Villanueva called on the remaining county board members to adopt further penalties for the illegal grows. He also criticized county District Attorney George Gascón for not prosecuting many of the illegal marijuana cultivators who are charged with misdemeanors.

“The community is suffering, we need you to do your part and do the prosecution and put these people out of business.”