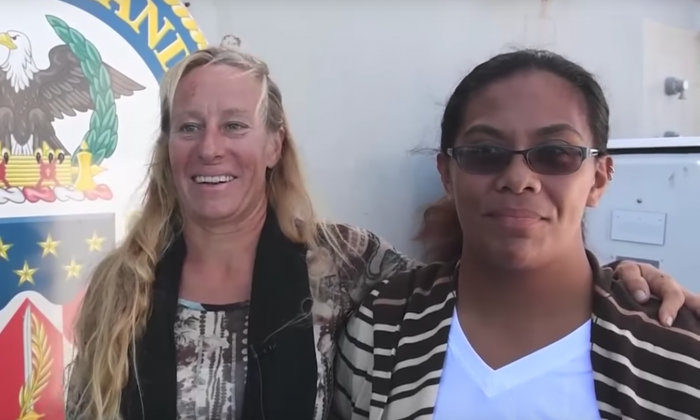 Jennifer Appel, Tasha Fuiaba, and their two dogs seemed genuinely happy when the U.S. Navy came to their rescue on Oct. 25. They were lost at sea for about five months, they said.

But when journalists fact-checked their story, some particulars seemed amiss. For starters, they never activated their emergency beacon.

Their boat was equipped with the Emergency Position Indicating Radio Beacon, or EPIRB, which was capable of alerting authorities to their location within minutes. But they didn’t use it.

Appel told The Associated Press she thought the beacon should only be used if one is in danger of dying within 24 hours.

“Our hull was solid, we were floating, we had food, we had water, and we had limited maneuverable capacity,” she said. “All those things did not say we are going to die. All that said, it’s going to take us a whole lot longer to get where we’re going.”

Yet Appel previously said they thought they would had been dead within 24 hours if the Navy hadn’t rescue them.

They also said they had six forms of communication onboard, including radios, satellite phones, and GPS, but they all failed.

The women set sail from Hawaii on May 3. Appel said that on the first day they encountered “a Force 11 storm, and it lasted for two nights and three days.” Such a storm would have wind speeds of 64–72 mph and cause waves 37–52 feet high.

But meteorologists detected no such storms around Hawaii on that day or at any time during several subsequent days, Fox reported.

The women met late in 2016 and within a week decided to take a trip together. They wanted to sail to Tahiti on Appel’s boat, the Sea Nymph, and then travel the South Pacific. Fuiava had never been on a sailing trip before that.

They packed two water purifiers, food for six months, and took their two dogs along. Appel said one of the purifiers didn’t work and that they used its parts to maintain the other one.

The Coast Guard made radio contact with a vessel that identified itself as Sea Nymph in June near Tahiti. The captain said they were not in distress and expected to make land the next day.

But they said they never reached Tahiti, because they encountered a 10-knot current that was pushing them west, away from their course, while their engine could only do four knots to push them back.

Then, around May 25, they said they encountered a storm that flooded the ignition of the engine so they couldn’t start it anymore.

What happened next still remains a bit of a mystery. That fact is, though, that on Oct. 24 a Taiwanese fishing vessel discovered the Sea Nymph 900 miles southeast of Japan—over 3,000 miles west of Hawaii, instead of 2,000 miles south, where Tahiti lies.

Appel said they had used up 90 percent of their food supplies by then.

The next day, the USS Ashland picked them up, unharmed. The Navy took them to Okinawa.