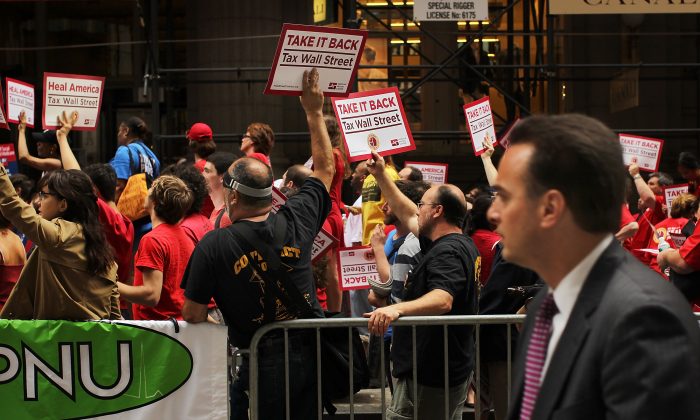 For some, the recession ended in 2009. For others it is still ongoing, despite the National Bureau of Economic Research declaring an end to the Great Recession in June 2009.

Since reaching bottom in 2009, stocks and real estate have recovered whereas wages remained stagnant. This was determined in an analysis of federal income tax data by Emmanuel Saez, an economist at the University of California–Berkeley. In turn, the discrepancy between labor and capital income led to greater income inequality after the Great Recession.

The very wealthiest Americans earned more than 19 percent of the country’s household income last year—their biggest share since 1928, the year before the stock market crash. And the top 10 percent captured a record 48.2 percent of total earnings last year.

The income figures include wages, pension payments, dividends, interest, and capital gains from the sale of stocks and other assets. They do not include so-called transfer payments from government programs such as unemployment benefits and Social Security.

In 2012, the incomes of the top 1 percent rose nearly 20 percent compared with a 1 percent increase for the remaining 99 percent.

According to Saez, recent political fights like the fiscal cliff or the sequester had little impact on income inequality.

In real terms and adjusted for inflation, income increased only 0.4 percent for the bottom 99 percent since 2009. The reality feels even worse for some as official inflation figures do not accurately reflect price increases for every person.

John Williams is a veteran economist who publishes ShadowStats.com, a newsletter service that provides clients with alternative measures of inflation, unemployment, and other statistics. He told the Epoch Times, “There is no way that the consumer can maintain a sustainable basis consumption that is growing faster than inflation.”

According to Williams, this is also the reason for sluggish GDP growth since the recovery started.

According to Wall Street veteran Victor Sperandeo, it was the Federal Reserve who avoided a complete economic meltdown in 2009.

“Zero interest rates for four years, three-and-a-half years into a recovery and then the Fed has done [Quantitative Easing (QE)] 1, QE2, QE3 and two operations twist. What would happen if there was no Fed, we’d be in collapse. Now the Fed is buying $85 billion per month,” he said.

The Fed’s intervention put a bottom under the declining stock market and also helped the housing market, while stabilizing the overall economy. Both categories generally benefit richer people who own the majority of these assets.

Since the recession officially ended in June 2009, the top 1 percent have enjoyed the benefits of rising corporate profits and stock prices: 95 percent of the income gains reported since 2009 have gone to the top 1 percent.

The corporate sector, which briefly stared at the abyss in 2009, learned its lessons and proceeded to slash costs to generate profits and repair balance sheets. As a result, most of the hiring has been in low-paying jobs and underemployment remains high. This explains the low increase in earnings for ordinary Americans.

Economists point to several other trends for the lagging labor share of income. In some industries, U.S. workers now compete with low-wage labor in China and other developing countries. Clerical and call-center jobs have been outsourced to countries such as India and the Philippines. Furthermore, technology has replaced some jobs completely.

Both Williams and Sperandeo believe the inflation that quantitative easing (QE) generates doesn’t benefit the whole of society and favors people with inside knowledge:

“Nothing is free. The price is inflation. The rich are benefiting and who is paying are the savers and the middle class and effectively the poor. When the Fed institutes a QE policy, it’s going to cause future inflation. Most of the people who are professionals on Wall Street like me know this. So what we do is buy stocks and commodities,” said Sperandeo.

Williams said “[QE] is the unhappy type of inflation, the one that drags you into ruin,” compared to demand driven inflation that comes from an expansion in real economic activity with real job additions.

Despite the concern that most of the wealthy people’s income derives from capital gains, Saez determined people are actually working for their money.

“The evidence suggests that top incomes earners today are not ‘rentiers’ deriving their incomes from past wealth but rather are ‘working rich,’ highly paid employees or new entrepreneurs,” he writes but issues a word of caution.

“The drastic cuts of the federal tax on large estates could certainly accelerate the path toward the reconstitution of the great wealth concentration that existed in the U.S. economy before the Great Depression.”