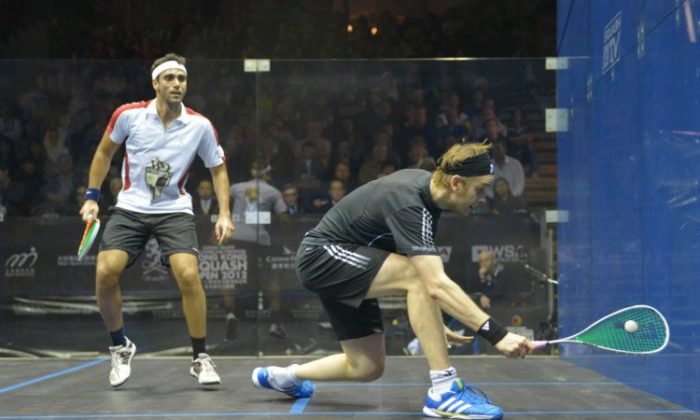 It was an incident-packed evening of men’s Semi-finals in the Cathay Pacific Sun Hung Kai Hong Kong Squash Open 2012 on Saturday Dec 1. Although, all proceeded as planned for the women’s Semi-finals, it was not the case for the men’s.

The venue at the Cultural Centre Piazza at Victoria Harbour-front looked super.

The floodlit portable glass court, with its marquee cover, show-casing the best-of-the-best squash players in the world. The seats were full—with many extra spectators viewing from the steps to the Cultural Centre outside the barriers and from around other sides of the venue. The only downside being that the weather was gloomy to begin with, but that may have only made the spectators a little uncomfortable, while not affecting the players.

With the setting ideal for the first women’s Semi-finals, play got underway.

The first women’s Semi-final progressed smoothly with the seed-dismissing Omneya Abdel Kawy of Egypy playing a competitive and closely fought match with Camille Serme of France. Kawy, who came through a hard 5-game match the day before, made more errors in the Semi-finals than on previous occasions, which allowed Serme to push her advantage. The Frenchwoman won the match in the fifth game 11-9, 4-11, 11-7, 11-13, 11-6 to reach her first-ever Hong Kong Squash Open Final.

In the second women’s Semi-final, World No. 1 Niclol David of Malaysia eased through to take the match against Natalie Grinham in three straight games. Grinham put up a good fight; played strongly and produced many good shots, but the consistency, speed and shot making of David were too good. David won the match 11-8, 11-5, 11-5.

While the women’s finals were completed successfully, the earlier gloominess had worsened and precipitation was threatening.

A light drizzling rain had began to fall by the start of the first men’s Semi-final featuring, the World No. 1 and reigning Open champion, James Willstrop of England against Karim Darwish of Egypt. All started well until the score was 4-2 to the champion.

The light drizzle had drifted under the portable court’s outdoor cover, into the court and made the floor wet—play was stopped and could not be restarted as the drizzle continued.

There was about a one hour delay while players, officials and spectators all had to cross the harbour back to the HK Squash Centre for the game to resume.

The venue was full, showing the dedication of the spectators to watching the matches.

They must have been pleased that they made the extra effort as they were treated to a match of the highest standard.

Willstrop in particular was supreme; his down-the-wall shots hugged the wall and were almost perfect length, as was the width and depth of his cross courts. His deception as to whether he would hit to length or drop the ball to the front of the court, was, as usual, to the highest standard. He chose the right shot at the right time almost every time, and his unforced error count was close to zero. It was an immaculate performance.

Darwish added to the spectacle with an array of good shots but on the night was not able to push home his advantage against the consummate champion. In both the first and third games it looked like Darwish might win, but when it came down to the final points, Willstrop had the tenacity and skills to succeed, winning the match 11-8, 11-5, 11-9 in 57 minutes.

The last match on court was No. 2 seed Nick Matthew of England against No. 5 seed Ramy Ashour of Egypt.

Ashour took the first very competitive game 11-9. At the interval between the first and second game Matthew called for a “personally inflicted injury break”, which gave him three extra minutes for treatment to his lower back.

All proceeded normally in the second game until the score stood at 9-9. At that point Matthew dropped a ball to the front of the court; Ashour in his normal athletic style, literally dived to retrieve it, but his return was weak and landed in front of his full stretched body. In trying to reach the ball Matthew stumbled over Ashour’s laying body; he hit the ball but it rebounded back to hit himself.

Matthew asked for a decision on the point: the referees’ ruling was “let” and the point was to be replayed.

Matthew was clearly not happy with the decision arguing that he had been obstructed and further discussions between him and the Marker took place. The “let” decision was upheld and on turning to return to court the Marker called a “Conduct Point” against Matthew.

The Marker said: “I heard what you said – you said: ‘that is the worst decision in history’. That is why I awarded the Conduct Point.”

The game now stood at 10-9 to Ashour and Ashour took the next point to win the game, making the match score two games to one to Ashour.

It took Matthew some time in the third game to regain his composure and he made several early errors allowing Ashour to race to 7-2.