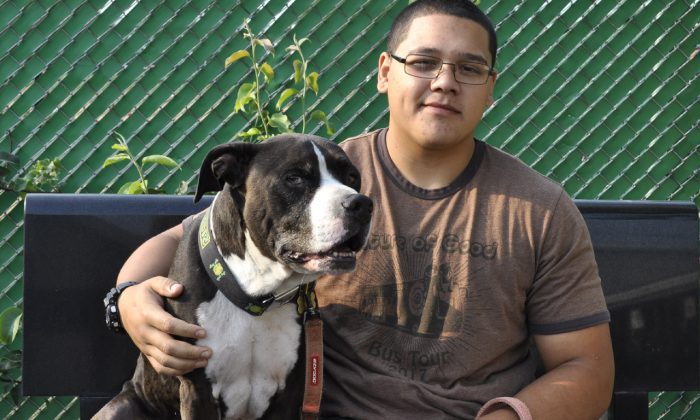 Daniel H. and Rusty reunited after harrowing life-threatening illness and emergency surgery. (Photo provided by the author)
Inspiring the World

Daniel H. jogged to the phone, his pulse racing. A call to the gym, where Daniel was allowed an hour a day of exercise while serving four years for robbery, could only mean one thing—a problem.

Shaking sweat from his forehead, he took the phone. “It’s Rusty,” the voice on the other end said. “He’s really sick.”

Daniel went into triage mode. Rusty, a pit-bull mix he had cared for and trained for seven months, had been fine when he’d left him in the living unit half an hour earlier. “What’s he doing? What’s wrong?”

He fired off questions. Every answer—listlessness, inability to get up, heavy panting, a bloated stomach—pointed to stomach torsion, an emergency situation in which the stomach twists and cuts off circulation. If Rusty didn’t get to the vet immediately, this dog that had come such a long way in Project POOCH would die.

Quickly, Rusty explained the situation to the guards and asked to return to his unit. As he rushed back to Rusty, Daniel ran through the steps necessary to get Rusty help. Top-level staff had to get Joan Dalton, POOCH’s executive director, on the phone. He knew she’d react immediately, but it was in the evening. Could they reach her on time?

In the few minutes it took to return to his living unit at MacLaren Youth Correctional Facility in Woodburn, Oregon, thoughts of first seeing Rusty flashed through Daniel’s memory. Like the other dogs in POOCH, a program in which incarcerated youth train and care for unwanted dogs so they can be adopted to good homes, Rusty had been neglected and most likely abused. He’d been living on the streets before a shelter picked him up.

When POOCH took Rusty in, Daniel became his caregiver. For seven long months he had cared for Rusty patiently, teaching him everything he could think of to give him a chance at adoption, to know the first loving home he probably ever knew. Without this dedication, Rusty would have had little to no chance for a better new life. He most likely would have been euthanized because of the number of pit-bull mixes in shelters. But slowly Rusty had come out of his shell as he learned to trust Daniel.

Rusty progressed to the level that he was one of the few POOCH dogs allowed to leave the kennel at night to stay in a living unit so youth not participating in POOCH could enjoy the companionship and love of a dog. For many youth, this was their first experience with a pet, and Rusty couldn’t have been a better choice. While prone to aggression with other dogs, he was gentle and affectionate with people.

When Daniel reached Rusty’s side, he was shocked. Less than an hour earlier, Rusty had been his new friendly, energetic self. Now he lay curled up and panting in the corner. He couldn’t even lift his head to acknowledge Daniel, with whom he had bonded.

“It’s okay, boy, we’re going to get you help,” Daniel whispered to Rusty as he fought back tears.

Within minutes, Daniel learned Joan was about 15 minutes away and was now rushing to MacLaren so she could take Rusty to the vet. She was confident Daniel had diagnosed correctly, and with stomach torsion, there was no time to spare.

Daniel met Joan at the door and together they settled Rusty into the car. Joan reassured Daniel everything possible would be done to save the dog Daniel spent hours with every day.

He knew Rusty would be adopted. He was prepared for that, but he was not prepared for Rusty to die. Being locked up and away from his family and friends was devastating, and Rusty had given Daniel a purpose to get up every morning. The sense of accomplishment he’d felt when Rusty passed his Canine Good Citizen test had given him enormous pride, something Daniel had seldom known before.

The clinic Joan took Rusty to confirmed the problem was stomach torsion, but they weren’t equipped for surgery. With every moment critical, Joan rushed him to the nearest emergency pet hospital. She called Daniel when Rusty went into surgery. “I can’t say for sure how he’ll be,” she told him, “But I can say that without your quick action, he wouldn’t have had any chance to survive.”

Daniel couldn’t relax. Nor could the other youth in his unit. For some of them, Rusty’s acceptance of them was their first taste of unconditional love. Unlike Daniel who was with dogs daily in POOCH, Rusty was the only dog they saw. He meant the world to them.

Daniel had Dachshunds and Chihuahuas growing up. His childhood hadn’t been easy, but his dogs had stuck by him no matter what troubles he faced. Through POOCH, he’d had the chance to stick by dogs while they learned lessons that would make them good candidates for adoption.

After four hours, Joan called with news. Rusty had made it through surgery. Unless unexpected complication arose, the lucky pup would be all right!

Thanks to Daniel’s quick thinking, his experience with dogs, and having payed attention in the POOCH classes, he’d saved Rusty’s life!

The cost of the surgery ran over $2,000. Joan never stopped to question if it was worth it. “Money is the last thing I consider when I see the good the dogs and the youth in POOCH do for each other. The power of the human-animal bond is priceless.”

Joan expects this to be only the beginning of the good Daniel will do. Not only is he a hard worker and dedicated to dogs, but he plans on pursuing a career working with them.

“Maybe I’ll be a vet tech. Maybe a trainer. Maybe I’ll work in a shelter. Whatever it is, I’ll be working with dogs, helping them heal, both physically and, if they’ve been mistreated, emotionally,” Daniel says.

Who knows? Maybe he’ll even become a vet. Or even a dog whisperer!