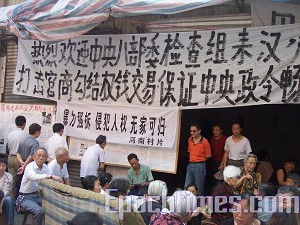 At the Human Right Conference on Hualou Street in Wuhan City. (The Epoch Times)
China

CHINA—Three hundred outraged Chinese citizens held an outdoor Human Rights Conference on Hualou Street in Wuhan City on May 20, 2007. The conference aimed to expose the deceptions and condemn the illegal housing demolition by the Chinese communist regime. The conference, organized by activist Yu Zhenghu, is believed to be the first public human rights conference ever held in China.

On the day of the event, protesting banners filled Hualou Street. The banners expressed Chinese citizens' anger towards the local regime's gangster-like enforcement tactics, such as hiring thugs to forcefully evict citizens from their homes so that the city government could demolish the dwellings and sell the land for considerable profit.

The conflict between residents and the corrupt local regime has been brewing for a long time. The Mayor of Wuhan City colludes with business owners and then illegally demolishes people's homes on Hualou Street, expropriating the land with little or no compensation. The residents then cannot afford to buy new homes with the meager compensation offered by the government. Before the residents have any time to find new homes, the local regime issues a non-negotiable deadline for the residents to vacate their homes.

Tension has mounted steadily, driven by the ever more outrageous actions of the local officials. Recently the city authorities hired a group of villains with clubs, knives, and steel helmets, to rampage through the neighborhood, breaking windows and kicking in doors, to “encourage” the residents to move out.

Another topic raised at the Conference was the illegal arrest of Chen Shunji. In 2006, Chen captured on film the brutal scene of a police officer beating an elderly woman in front of the Wuhan City Hall. The armed policeman struck the unarmed elderly lady repeatedly, and picked her up and threw her on the ground. The local authorities wanted Chen to turn over the film, and arrested him when he refused to comply.

Chen has been detained for over six months with no case number, no sentence, and no evidence. Chen's father appealed at the Wuhan City Public Safety Bureau and to date has received no answer.

Attendees at the Conference agreed to go to the Wuhan City Public Safety Bureau on May 30 to demand for Chen's release. A large-scale demonstration is expected.