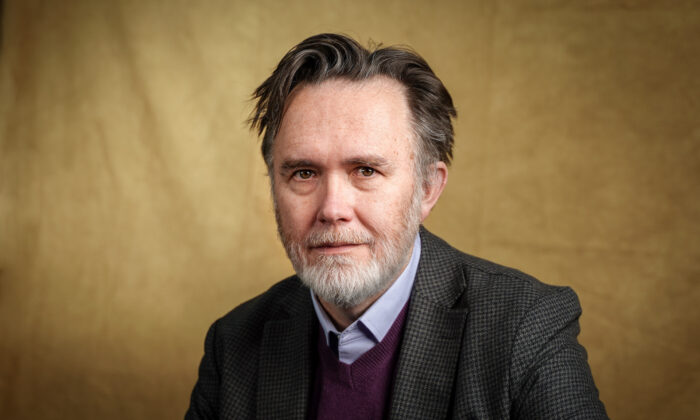 Rod Dreher, author of "Live Not by Lies" and a senior editor at The American Conservative, in New York on Jan. 21, 2022. (Samira Bouaou/The Epoch Times)
Big Tech, Censorship, and Socialism

Rod Dreher, senior editor at the American Conservative and author of “Live Not By Lies,” says people are losing their ability to distinguish fantasy from reality, especially the younger generation that has grown up on the internet. Dreher says this is a key contributing factor in the rise of transgenderism and totalitarianism in the West.

Dreher said that those of the younger generation “believe that reality is something that can be completely constructed. They’re confusing the difference between fake reality within artificial intelligence online with the actual flesh and bone world,” Dreher said during a recent interview with Epoch TV’s “American Thought Leaders.”

One of the most glaring examples of the inability to distinguish fiction from reality is the exponential rise of transgenderism among western youth.

“I think they believe that all of reality is fungible, as it is online. And I think that this is something that the propagandists, those who wish to rule over us, will exploit in the future to neutralize any opposition to what they want to do.”

Colin Wright: Why I Chose Career Suicide and Spoke Out Against Gender Ideology and CRT

Abigail Shrier the author of “Irreversible Damage: The Transgender Craze Seducing Our Daughters” said it is hard to get universal data for the number of youth in the United States that seek transgender treatments because the health care system is not centralized like it is in Europe and Australia.

During a 2021 interview with Jordan Peterson, she said during the investigation for her book she found that the youth identifying as transgender “went from roughly, 1 in 10,000 to, 2 in 100 high school students. We also know that between 2016 and 2017, the number of females requesting gendered surgery in the United States quadrupled.”

A 2020 study published by the Journal of the American Medical Association shows that at two clinics, the number of referrals of children and adolescents for “specialist gender services” more than doubled between 2014 and 2016.

In addition, medical institutions are allowing young children to get irreversible medical procedures to change their sex/gender, sometimes without parental consent.

“The ideologues who run our government, and who run our children’s hospitals and things like that, prefer ideology to reality,” said Dreher. “This is the law. This is happening everywhere because parents don’t realize what’s going on because the media are hiding it from them.”

The work of non-mainstream media journalists such as Christopher Rufo has been revealed that many U.S. school districts have “policies in place that forbid teachers and staff members from telling the adults, the parents, if their child is presented as transgender at school,” said Dreher.

Parents who have caught on to what is happening to their children in schools are now fighting back by going to school board meetings, running for political office, or filing lawsuits.

The state usurping parents’ authority over their children is nothing new, Dreher said, noting that this happened under Stalin in soviet Russia.

“The communists intentionally wanted the state to step in and keep these kids from being raised by the ‘bigoted old-fashioned reactionary ideals’ of their parents,” said Dreher. “This is happening in America right now.”

The delay in parents realizing this type of control and indoctrination has been happening in their children’s school is due to a complicit media environment, Dreher said.

“We have got to wake up now,” he said. “We’re not going to hear these stories from the mainstream media.”

Meanwhile, U.S. Congress is trying to codify this ideology with The Equality Act, which would force everyone to adopt the belief that there are more than two sexes, force women to compete with biological males, and share bathrooms, locker rooms, jails, etc. with biological males.

Dreher believes this transgender ideology is being supported by legacy media because it is a part of a broader progressive sexual liberation agenda.

“This is a strong ideology that has been ruling the United States in the West since at least the 1960s with the sexual revolution, and now we’re seeing it taken to its most extreme form with the sexual mutilation of children,” he said. “I think what’s coming next is going to be pedophilia.”

Dreher based his prediction on what happened in the 1980s with the Green Party in Germany, which advocated for sex with children and the normalization of sex at younger ages.

“But if you don’t go out looking for this information, if you just sit back and passively depend on The New York Times, the network’s cable news, to tell you what’s happening, you will never find this out because we’re part of this vicious circle of unreality. They don’t want people to know what they’re doing to our children.”

But most Americans are not aware that these ideologies are so pervasive and that the United States is sinking into totalitarianism, mainly because it does not look like Stalin’s totalitarianism, with bread lines and gulags, said Dreher.

It’s still totalitarianism because people who run all the elite institutions in our society, including the government, big businesses, the military, media, universities, etc. are all operating “from the same ideological platform,” said Dreher.

“It is an illiberal leftism that [uses] identity politics, making people fit in favored categories of so-called victims, privileging them, and making everybody else evil.”

Exclusive: ‘A Recipe for Cultural Suicide’—Peter Boghossian on Woke Ideology and the Case for Defunding Universities

Dreher said he took inspiration from one of the most famous dissidents against the Soviet Union, Alexander Solzhenitsyn, who said to fight totalitarianism people must do their utmost “to live in truth, because the whole system, this whole corrupt system, depends on everyone being willing to nod their heads and go along with the lie.”

Dreher cited political philosopher Hannah Arendt, who said that when a society loses the desire to know the truth, and loses its ability to distinguish between what is true and false, the ground for totalitarianism is laid.

“And I think that has happened on both the left and the right.”