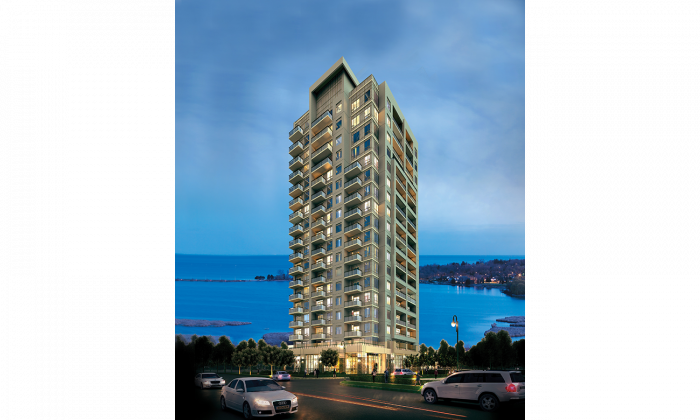 Rendering of San Francisco By The Bay, a condo and townhouse development at Bayly St & Liverpool Rd. in Pickering, Ont. The development has a total of 235 units. (Courtesy of In2ition)
Canadian Content

In2ition Realty in Tune with the GTA’s Chinese Community

That the myriad steps involved in the construction process, from brokering land transactions to owner occupancy, can be found at a one-stop shop is a testament to In2ition Realty’s outlier status in the Greater Toronto Area’s crowded construction industry.

In2ition, the multi-award-winning preconstruction brokerage, wears many a proverbial hat. It brokers land acquisitions for developers and runs intense market research campaigns to determine which demographics projects it should target; it devises marketing campaigns, designs floor plans, amenities, features, and finishes, and has in-house realtors.

The GTA’s burgeoning Chinese community comprises about a third of the buyers In2ition and its client builders sell to.

“A third of our business is with the Chinese community, especially in certain markets,” says Debbie Cosic, CEO and president of In2ition Realty. “A third is Middle-Eastern and South Asian. The other third is a mix of everything.”

Cosic says the Chinese community is among the savviest buyers and investors she’s seen because of its penchant for recognizing value.

“The Chinese are astute buyers and realize the value of new frontiers,” she says, adding that many in the community have their sights set east of Toronto.

“There is construction of the new airport in the east end, the 407 being extended, and talk of a new casino east of the GTA. Pickering is what Mississauga was 20 years ago. They appreciate the rapid growth that happened with Mississauga (with Pearson International Airport nearby) and realize the undiscovered investment opportunities moving east.”

One such project is Chestnut Hill Development’s San Francisco by the Bay in Pickering, a condominium and townhouse project that will surely retain value because it’s built by Lake Ontario.

Another Chestnut Hill project, Lotus Condos, is marketed to the Chinese community. In2ition’s meticulous market research ascertained many aligning factors that made Lotus ripe for the community.

“We most recently marketed Lotus Condominiums and chose the theme of a lotus flower. Montana Steele is the advertising agency where together we targeted the Chinese community by designing an ultra-luxe building that is a nod to the affluent neighbourhood of Bayview Village surrounding it,” says Cosic, who also noted upscale Bayview Village Shopping Centre is located directly across the street.

“Many of Lotus’ buyers are Chinese. It’s designed with luxurious interior amenity areas and many terraces of gardens that appeal to that market.”

Another Mississauga project In2ition is releasing this fall is the latest phase of Amacon’s Parkside Village called Block Nine North Condos, a 257-unit tower near Square One. Its previous phase, Block Nine South, has 281 units and is already 70 percent sold. Cosic calls it a can’t-miss investment opportunity.

“It’s a great investor opportunity because of Sheridan College being walking distance, and it’s home to 5,000 students with no residences around.”

In2ition has had a hand in reversing the fortunes of failing developments around the city. LTD Condos downtown stumbled out of the gate with sales well below 50 percent before In2ition concocted a brilliant marketing strategy and turned it into a red-hot seller. Another recently succesfull development, IQ Condos in Etobicoke, underwent a radical four-month transformation at In2ition’s behest, and now only a handful of its 292 units remain unsold.

It might seem unthinkable that property wouldn’t sell in Toronto’s sizzling market, but the 2008 recession proved a spanner in the works, even if only ephemerally.

Outside the GTA, Cosic advises Saskatchewan has an investor-friendly condo market because of a substantial transient workforce. Whereas Alberta relies heavily on its petro-economy, Saskatchewan has a booming mining industry with a strong contingent of migrant workers.

Toronto’s investors have entered the Dallas Fort Worth marketplace with In2ition recently. They are selling 6,000 homes for A2A developments in 3 different ranch-style master-planned communities. They offer a unique investment plan where you can become a partner to the developer and co-build 47 homes over 5 years with a minimum $1million investment netting a 120 percent return.

This Property Development Program PDP has an unusual spin where it can be modified to the U.S. EB5 Visa plan allowing a potential Investor in this program to qualify for a U.S. green card.

The GTA is mired in a unique housing crunch—literally. The decade-old Places to Grow Act mandates building upward rather than outward, and not only has that put a premium on detached houses because so few are on the market, it’s tapered lot sizes in new builds.

Cosic admits it makes designing floor plans more challenging; however, she dismisses the notion that it’s an unwelcome task.

“We’re designing functional floor plans in smaller spaces. You have to eliminate walls, hallways, and duplication of rooms. We’re creating multi-functional areas and are being innovative and creative with spaces. Creating nooks with areas built in and incorporating kitchens that act as attractive furniture and gathering areas; creating small nooks for a desk or bookshelf; integrating the washer/dryer into kitchens; dens with wall beds coming down—these are some of the tricks of making a small space functional,” she explains.

“It’s exciting. It’s nice to be challenged to design something out-of-the-box and come up with answers to problems. Even zoning problems or architectural issues, we come up with solutions, and for us those are the things that excite us about this industry.”