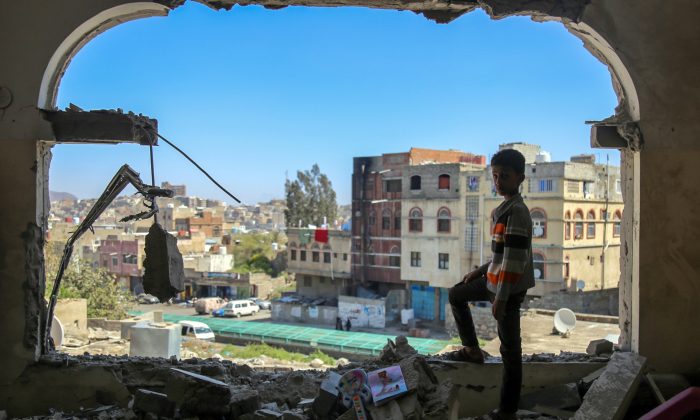 As war continues to rage uninterrupted in Yemen, a humanitarian pause is badly needed as the country spirals down to chaos, leaving the majority of the population in urgent need of medical care. Restrictions on access to medical supplies and care are key impediments in improving the situation of people in need. A five day humanitarian pause would allow supplies and care to reach those people and relieve their dire health situation.

According to UNICEF, Yemen has one of the highest rates of chronic malnutrition in the world, especially among children.

At the same time, attacks on health facilities continue. Last October, the World Health Organization (WHO) condemned the bombing of a Medécins Sans Frontières’ (MSF) supported hospital in Saada Province in northern Yemen. MSF believes that as a consequence 200.000 people were left without medical care. That attack, that violated International Humanitarian Law, was the second on an MSF-run facility in a month.

Since the beginning of Saudi Arabia’s attacks on Yemen, conducted with U.S. support, more than 5,700 have died (almost half of them civilians)—including hundreds of women and children—and 28.753 injuries have been reported. Several health workers have also been killed and 47 health facilities in 11 governorates have been damaged or closed as a result of the continuous violence.

Health care services in all public hospitals have been reduced, especially operating theaters and intensive care units. At the same time, disrupted immunization activities have increased the risks for measles and poliomyelitis, even though Yemen is presently free of polio.

The breakdown of the water supply and sanitation systems has facilitated the spread of diseases such as malaria and dengue fever, as well acute diarrheal diseases, particularly affecting children. Also, because of limited communication, the early warning alert system for diseases has been seriously affected.

The country has one of the highest rates of chronic malnutrition in the world. According to UNICEF, 1.3 million Yemeni children younger than five years now suffer from acute malnutrition, compared to 850.000 before the war started. 320.000 are severely malnourished, twice the amount before the crisis. The little cash people have is to pay for food and gas—at greatly increased prices—leaving no money to afford health care.

In Mideast Wars, Hunger Grips Millions Across the Region

The Lancet reports that approximately a quarter of the country’s health care facilities are no longer functional. To make matters worse, as Ronald Kremer, MSF medical emergency coordinator, says, “People do not dare to go to hospitals because they are afraid that they are targeted and, even if they want to go they may not have the means—even where public transport does exist, it is very expensive because of the fuel problems.”

Fuel problems have increased the problems in obtaining clean water. Lack of a proper water supply and the dire sanitation and hygiene situation has led to outbreaks of dengue and malaria. Because many Yemenis store water in open containers, that becomes an ideal breeding ground for disease-transmitting mosquitoes.

So far, there are more than 2.5 million people who have become internally displaced persons (IDPs). To compound an already difficult situation, disrupted immunization campaigns have led to increasing number of children affected with measles and rubella, particularly among IDPs living in overcrowded conditions.

As a result of the conflict, many hospitals, laboratories, health warehouses, and administrative offices have closed. Primary care facilities have minimum access to medicines, supplies and equipment. Fuel shortage has affected the proper operations of ambulances.

In this situation, a humanitarian pause is urgently needed. A five day pause, as proposed by WHO, would allow humanitarian organizations to respond to some of the most life-threatening needs of the people, particularly women and children caught in the middle of the conflict. An MSF doctor taking care of a badly hurt child in Syria realized that the child was desperately trying to tell him something. When he asked his translator what the child was saying, the translator responded, “Don’t they realize that we are children?” A similar question could be asked in Yemen today.