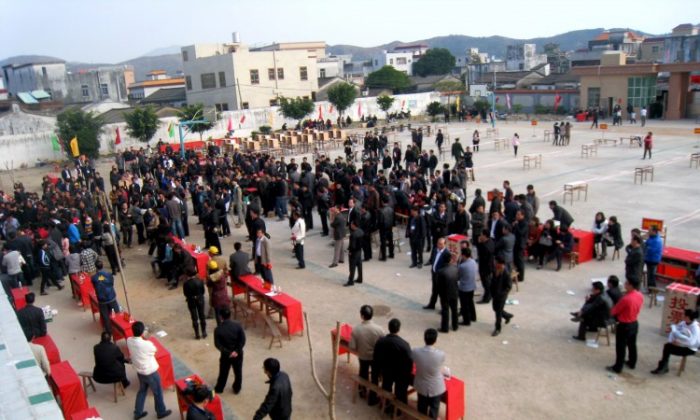 Wukan residents cast ballots on Feb. 1 in an election process that appears to be subject to arbitrary changes in rules by local Party officials. (STR/AFP/Getty Images)
China

In Wukan Village Election, the Party’s Not So Hidden Hand

The Chinese village that gained international media attention in September 2011 by throwing out the Chinese Communist Party-approved committee that ruled it, is now scheduled to have an election for a new village committee—an election the CCP is working to manipulate.

The inhabitants of the southern Chinese village of Wukan protested for three months in a standoff with the CCP and its security forces. Villagers had been outraged by the village committee selling the village’s land without providing proper compensation for the inhabitants.

Party officials broke the stalemate on Dec. 21 by agreeing to the villagers’ demands and recognized as legitimate the “villagers’ council” that had been elected to govern in the place of the ousted village committee.

That recognition lasted one week. On Dec. 28 Party officials ordered the villagers council disbanded and an election for a new committee.

As the first step in the electoral process, on Feb. 1 villagers cast ballots for an 11-member electoral committee that will organize and oversee the actual election for the village committee, which will take place in March.

Prior to the Feb. 1 vote, the Party announced one set of rules for the election.

Mr. Zhang Jiancheng, one of the leaders of the villagers’ autumn protest, said that the representatives most trusted by villagers have already had their rights to participate in the March 1 election stripped of them due to the rule changes.

“The rules stated by the county government before and after the election changed enormously, making us very confused,” Zhang said. “They have overturned the rules many times, saying that the ombudsmen elected to the electoral committee cannot participate in the villagers committee election. But in the beginning when the authorities put the names of Yang Semo and other respected elders on the ballot list, they didn’t say that. We’re currently arguing over this with county officials. We’ve got to sort this out.”

Yao Lifa, a well-known village election activist, also objected to the county officials making up rules on the fly in an interview with RFA.

In Wukan, the Party’s breaking its agreement and changing of the election rules are part of a pattern of Party manipulation of village elections.

“Every election in China is manipulated,” says Cheng Xiaonong, a former advisor to ousted Party leader Zhao Ziyang, now living in the United States. “There is no unmanipulated election. The political system is at all times under the leadership of the communist party… the local branch—it’s leadership is absolute and will never be shaken.”

Party branches can be found at every level of government in China, and even in large foreign enterprises. “The local Party branch is the real authority,” says Cheng. “The real king of the village is the party secretary rather than the village committee. The village head is simply responsible to the communist party secretary.”

The Party secretary controls most of the human and financial resources of the village, and approves all important decisions made by the village head. Generally, Party secretaries don’t even want to be village heads. “The head has to do a lot of daily things… it’s time consuming, kind of a hard job,” Cheng says.

Typically the chair of the village committee, also called village head, is supposed to be a Party member—or if not, is expected to follow the leadership of the Party secretary. “The secretary is behind him and supervises him. If he says no to the secretary, that implies that he says no to the leadership of the CCP. That’s a serious political problem and he’ll be fired unconditionally,” Cheng says. “I have personally experienced this in rural China.”

Villager committees were instituted in China in the late 1980s, initially as a way for hardline Party officials to restore order in villages, many of which had come under the control of local strongmen after the collapse of the commune system set up by Mao.

The “Organic Law on Villager Elections” of 1987 was the first law formalizing this process in the nearly one million villages across China. Elections were made mandatory in 1998. But villager committees are not formally parts of the governing apparatus of China—they are overseen by township and county governments, who often intervene in the election process. Nor may villager committees levy taxes.

Xiang Shouxin, a human rights activist and petitioner of over two decades experience, in an interview with The Epoch Times called attention to the Party’s motives in Wukan.

“Now they want to re-do the villagers committee election,” Xiang said in paraphrased remarks. “The fundamental goal is not to resolve the land issue, but to purge the villagers’ council and bring villagers under the Party organization’s leadership.”

Along with taking control of the village’s electoral process, local Party authorities have also reasserted their authority: police cars and armed police have been dispatched and made their presence known around the village.

A reporter for Hong Kong’s Apple Daily who was on the scene painted a troubling scene. “After arriving here yesterday I have felt deeply the changes that have taken place,” wrote the journalist, whose name did not appear in a byline for the article. “Gone are the digging of trenches, erection of barricades, and tense anti-Party atmosphere. Instead, villagers have adopted bureaucratese in response to questions, saying ‘we believe the Party will resolve the problems,'”

Attempts to conduct interviews were also cut short by other villagers whispering in local dialect to not make trouble, the journalist wrote.

Among the disquieting changes in the village is the role being played by Lin Zulian, who had been a leader of the village protests.

After the agreement between the village and Party authorities, Lin was appointed Party secretary of the village. The villagers now don’t know whose interests he ultimately represents—that of the people, or of the Party.

The Apple Daily journalist notes his encounter with Lin: “I went to his house multiple times to do an interview, but with no result. At 9am one morning I bumped right into him, and said ‘a five minute interview is fine, too,’ but he claimed he had a meeting to attend soon. He got into his car, and refused to be interviewed.”