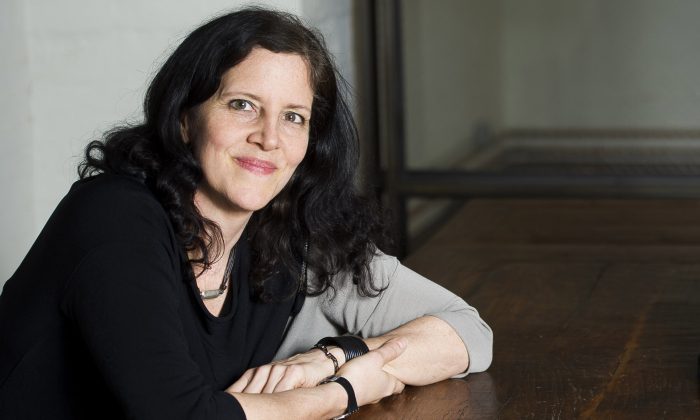 FILE - In this April 16, 2014 file photo, Laura Poitras poses for a portrait in New York. Poitras has a solo exhibition titled, "Astro Noise," showing at the Whitney Museum of American Art through May 1. (Photo by Charles Sykes/Invision/AP, File)
HK Life

In Whitney Exhibit, Poitras Explores the Art of Surveillance

But you might be asking it as you stroll through “Astro Noise,” journalist and filmmaker Laura Poitras’s exhibit at the Whitney Museum of American Art, in which images stemming from mass government surveillance are, in a number of cases, physically striking.

Take, for example, the patterns of bright greens, blues, and oranges adorning the wall as one enters the exhibit. Seen from afar, they appear to be colorful modern paintings one might see in any contemporary museum. But actually, Poitras is presenting data—hacked Israeli drone feeds from a listening base in Cyprus. The original images were contained in documents leaked by former NSA contractor Edward Snowden.

“Definitely the piece is trying to work on multiple levels,” says Poitras, best known for “Citizenfour,” her Oscar-winning documentary about Snowden, and her news reports on the same subject, which won a Pulitzer Prize.

“We found these fascinating colorful images that I was immediately compelled by. And they also have this fascinating story, so they work as news. We’re looking at intercepts from hacked Israeli drone feeds. But it’s not cynical. I like them as images, too.”

Though Poitras is best known as a filmmaker and journalist, she says her first solo museum show has given her a chance to explore the issues important to her in a medium even more suited to her way of thinking.

“I felt almost MORE at home,” she said in a recent interview. “The creative process was really liberating. It’s more abstract, which is what I like. It opened up new possibilities, and liberated me from things I’m happy to be liberated from.”

Though covert surveillance might not, at first glance, seem like a subject for exploration at an art museum, the Whitney’s director, Adam Weinberg, begs to differ.

“Artists reflect their times, and we are living in very complicated times,” Weinberg says. “It would be very strange if people were only dealing with questions of beauty and emotion at a time when the world is in such a state.”

For Weinberg, one of the most valuable aspects of the exhibit, which opened last month and runs through May 1, is that “it’s an experiential installation. It’s not just about information. One of the things that’s happened in this day and age is just the absolute avalanche of information, which we could never ever hope to sift through, and in most cases we can’t even understand half of. (But) we still have to make ethical and moral judgments about notions of surveillance and privacy, and this … puts the viewer at the center of those questions.”

That dynamic is perhaps most powerfully explored in a room titled “Bed Down Location,” in which visitors lie down on a square slab and gaze upward at footage of a night sky. The skies we’re looking at are in places like Yemen, Somalia, and Pakistan. We see stars, buildings, and, what else? What is out there, Poitras asks us to wonder, that we can’t see?

We’re left to ponder that. But later, visitors will encounter evidence that they were being watched, as they lay on that slab.

Weinberg finds an irony in that piece. Yes, it makes us feel the impact of surveillance, if only for a moment, but he adds: “One of the great ironies is that any time almost anybody walks into any museum, they’re on camera. So in fact, what (Poitras) is creating as an installation is in fact being surveilled at all times by museum security.” In museums but also, he adds, in banks and so many other places where our images are captured.

“What’s very powerful is that she calls attention to things that almost go unnoticed in everyday life,” Weinberg says. “And these are things that have very far-reaching moral and ethical questions attached (to them).”

It’s hardly a surprise that the exhibit touches on the events of Sept. 11, 2001. One of the first images to greet visitors is a film of people staring at ground zero in the days after the attacks. The footage is slowed down, and the expressions are of shock, concern, confusion, horror, and curiosity.

But then on the other side of the screen, we watch something completely different: U.S. interrogations of prisoners captured in Afghanistan, at Guantanamo. A man is questioned repeatedly about his wife’s name. He asks permission to stretch his leg. Poitras seems to be telling us that one side of the screen is inextricably linked to the other. (There is little written explanation provided throughout, something that might frustrate those not using an audio guide.)

“With long-form filmmaking you control time,” she says, “and it was nice to be able to hand that back to the viewer. You can decide where to enter and exit. And it’s something that I’m liberated from as creator.” On the other hand, she says: “I loved controlling the space.”

One section displays a very personal experience. After filming some footage on a rooftop in Baghdad in 2004, in a neighborhood where a U.S. soldier had been killed, Poitras discovered she was on a government watch list. She was detained and questioned every time she tried to cross a U.S. border. She moved to Berlin to escape the ordeal. She finally filed a Freedom of Information Act lawsuit and received many pages of documents—some of which, heavily redacted, appear in the exhibit. She says the government never asked to see her footage.

That personal section aside, Poitras is more interested in portraying the collective experience of our daily lives. Both she and Weinberg say they’re well aware that some Americans care more about mass surveillance than others.

“People do not come out with the same responses,” Weinberg says. “I think for a lot of people it’s very haunting and creepy, and others are much more nonchalant about it.”