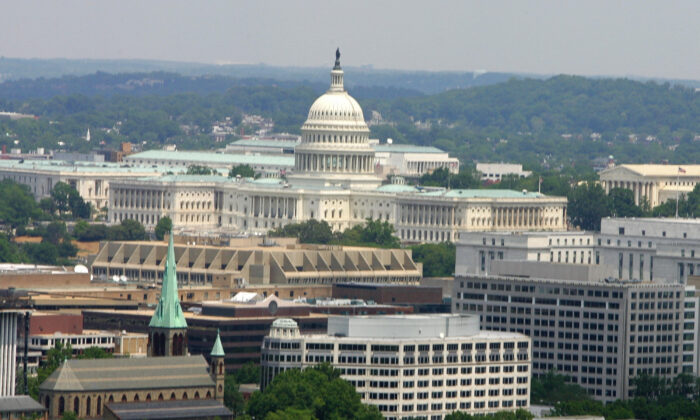 The U.S. Capitol and the Washington, D.C. skyline are seen in a file photo on May 16, 2005. (Paul J. Richards/AFP via Getty Images)
Viewpoints

In Washington, Honesty Is Such a Lonely Word

A favorite game of politicians, when reality does not conform to the facts they want, is to simply redefine reality.

Democrats want big government, a lot of spending and taxation, the former of which we are now paying for in inflation, so the new strategy of Democrats is to now claim that spending and taxes reduce inflation.

We now have the Senate moving legislation with a price tag of $433 billion in new spending and $327 billion in new taxes, and it’s called the Inflation Reduction Act.

It’s like McDonald’s serving up a new Big Mac with more beef, more cheese, and more sauce, and calling it the Weight Watchers Special.

Our president and Congress are imploding in the polls, and what we get from them are word games.

A commonly accepted definition of recession is two consecutive quarters of economic contraction.

The Commerce Department just reported that the U.S. economy contracted 0.9 percent in the second quarter. This follows a contraction of 1.6 percent in the first quarter.

Our president says no way. Our Treasury Secretary, Janet Yellen, who apologized recently for being wrong last year, denying that inflation was on its way, held what the press called a “rare stand-alone news conference” at the Treasury Department, to assure us we are not in a recession.

It’s reminiscent of comedian Groucho Marx, who quipped, “Who are you going to believe—me or your own eyes?”

On a similar note, the House has passed the Respect for Marriage Act, which now will be considered in the Senate.

The Respect for Marriage Act would codify into federal law the legality of same-sex marriage.

This is in reaction to a note by Supreme Court Associate Justice Clarence Thomas in his concurrent opinion in the recent Dobbs decision overturning Roe v. Wade, suggesting that the Obergefell decision, in which the court legalized same-sex marriage in 2015, should be readdressed.

It’s simply more of the Washington word-game culture, which we now see in government spending and taxing suddenly being about reducing inflation, and consecutive quarters of economic contraction not necessarily being about recession.

To call this legislation the Redefine Marriage Act would be honest, something simply unheard of in Washington.

It is important for same-sex marriage advocates to call this the Respect for Marriage Act, because this suggests that, for those few thousand years in which no one questioned that marriage is between a man and woman, we disrespected marriage.

Now, in our new enlightened age, we understand the truth that marriage includes vows between individuals of the same sex, and thus we now respect this sacred institution.

A recent New York Times poll indicated just 13 percent of Americans are happy with how things are going in our country.

It’s not such a great surprise. Why are Americans so dissatisfied?

Billy Joel had a hit song years ago called “Honesty.”

“Honesty is such a lonely word / Everyone is so untrue / Honesty is hardly ever heard / And mostly what I need from you.”

As we move into elections during these chaotic times, we might recall the words of one of the nation’s founders, Thomas Paine, who observed, “We have it within our power to begin the world over again.”

Those who aspire for political office and power might consider that many among the 87 percent who are not happy with our country today and where they see it headed, know that truths exist—truths upon which a great nation was built—and despair how they have disappeared in our public life.

Leaders who have the courage to be honest, despite how challenging this can be now, will wake up a lot of souls in our nation who recall and long for better days.