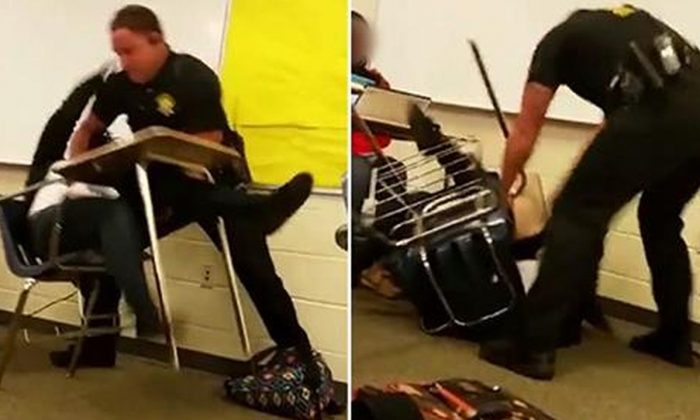 (Screenshot taken from cell phone video uploaded to YouTube)
US

COLUMBIA, S.C.—A sheriff’s deputy in South Carolina is on leave after a video showed him tossing a female high school student from her desk and dragging her across a classroom.

Richland County Sheriff Leon Lott was returning to Columbia on Tuesday from a conference in Chicago to get more information about the confrontation at Spring Valley High School.

*WARNING: The footage in the video below might be disturbing for some.*

No one was hurt in Monday’s confrontation, which officials said occurred after the student refused Fields’ order to leave the classroom for being disruptive. The incident was captured on cellphones by several students.

The video shows Fields asking the girl to stand up. The girl remains seated and the officer wraps a forearm around her neck. The officer then tips the desk backward until she falls onto the floor. The officer tosses the girl several feet across the floor to the front of the classroom, where Fields orders her hands behind her back and puts her in handcuffs.

Lott told local news outlets that the video showed the student resisting and being arrested.

“It’s very disturbing what happened today. It’s something I have to deal with and that’s what we’re going to be doing,” Lott said by telephone Monday. According to deputies, Lott has written to U.S. Attorney William Nettles and the FBI requesting a formal investigation.

A group called the Richland Two Black Parents Association also has called for a federal investigation of the confrontation. Fields is white, and the student involved is black, according to Wilson. The group said the videohas “revealed what many African American parents have experienced in this district for a very long time.” Authorities have said they do not believe race was a factor

The Rev. Jackson said Tuesday that he also agrees federal authorities should investigate. Jackson — who said he’ll visit Columbia on Tuesday to get more information — called the video a “national disgrace” and said the incident represents a pattern of unfair behavior against blacks.

“This man should be arrested, charged, fired and sued,” Jackson said. “The department should be sued.”

Richland 2 Superintendent Debbie Hamm released a statement about the incident.

“Our district is deeply concerned about an incident that occurred at Spring Valley High School today,” Hamm said Monday.

“Student safety is and always will be the district’s top priority,” Hamm said. “The district will not tolerate any actions that jeopardize the safety of our students.”

“I have watched the video several times and there is no doubt that the video is extremely disturbing. The amount of force used on a female student by a male officer appears to me to be excessive and unnecessary,” Manning said.

The images captured an “egregious use of force” against the student, ACLU of South Carolina Executive Director Victoria Middleton said.

Columbia Mayor Steve Benjamin called for an independent investigation of the confrontation.

“We need an independent investigation to get to the bottom of this incident and see that justice is done,” Benjamin said in a statement.