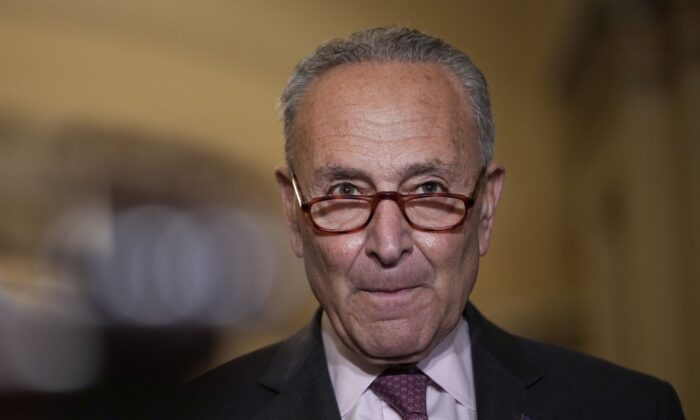 U.S. Senate Majority Leader Chuck Schumer speaks to reporters after a lunch meeting with Senate Democrats discussing a range of issues including the debt ceiling, in Washington on Sept. 28, 2021. (Drew Angerer/Getty Images)
Viewpoints

In US, Unrestricted Spending and Borrowing Continues Amid Debt Crisis

Can we talk about the U.S. debt crisis? We can’t? Dang.

You may not even know they’re having one. After all, they just keep borrowing, spending, and taxing, while progressives say tax rates are, like, way too low. So perhaps you missed the stuff in your news feed about the debt ceiling.

Or the newspapers. Because I’ve been watching this story since there was no such thing as a “news feed” or “internet.” Way back in the 1980s there’d be this big hoo-hah about government spending and borrowing way too much. I mean trillion dollar budgets? $150 billion deficits? And people would yammer about waste and bipartisan committees would make courageous compromises to kick the problem down the road.

At some point everyone apparently decided it was just theatre because the crisis never came. Under the Gipper, while Hank Williams. Jr. sang “Reagan is a cuttin’ the budget makin’ the democrats scream,” federal spending rose from $678 billion to $1.144 trillion while debt soared from $738 billion to $2.1 trillion. And by fiscal year 2021, the Congressional Budget Office predicted spending of $6.8 trillion, revenue of $3.8 trillion, and a mere $3 trillion deficit, not even one in two dollars borrowed, though luckily the real deficit was just $2.77 trillion, and the debt hit only $23 trillion. Good thing Trump beat Hillary or the United States might budget like a banana republic.

Strangely, I got an NBC email anyway about “How averting government shutdowns has turned commonplace.” And the issue isn’t even debt or deficits. Instead, you’ll be happy to hear, it’s a more general breakdown of government functioning. Congress is meant to pass appropriation bills before Oct. 1 to pay for government operations, but instead “it often turns to continuing resolutions as a stopgap” that are now used “to cover an average of more than half the year,” whereas before 2011 it was only a third.

Yes, you read that right. They can’t even come up with new ways to spend imaginary money to curry favour with profligate voters, so they just put the thing on autopilot. For which they collect over $200k a year plus benefits, up from $6 a day in 1789. (I realize among the lovely things they’ve bestowed is inflation, but still, 1815’s $1,500 annually was only $21k in today’s money.)

On Dec. 2, the New York Times chortled “Congress Approves Spending Bill, Averting Government Shutdown/ The vote to fund the government through mid-February came after lawmakers staved off a Republican threat to force a shutdown over vaccine mandates.” So it was lawmakers against Republicans, presumably lawbreakers. Although technically the House voted 221-212 with only one Republican “aye,” but 19 GOP senators joined every Democrat in going “yeah, whatever man.”

Now I’m not really in favour of defunding government if the other party wins a vote. It seems sulky. Ideally, you’d go win a vote then fix the budget. Unfortunately, the odds of the former seem far better than of the latter. So despite heroically foresighted action to stave off disaster until some weeks past Christmas, the debt crisis rumbles on. I did not imagine it.

CNBC reported in mid-November, as though it were the most normal thing in the world, which perhaps it now is, that the treasury secretary had announced “that the U.S. will reach its debt limit on Dec. 15, almost two weeks later than her initial forecast of Dec. 3.” Saved! “Those additional 12 days would offer Congress more time to strike a deal on how to lift or suspend the debt ceiling” or else “the U.S. government would default for the first time ever.”

Not, you’ll notice, tackle the spending and borrowing crisis. Instead, in another act of statesmanship that would have dazzled Cato the Elder, legislators had earlier “passed a stopgap debt ceiling increase in early October” with a permanent hike “just part of the Democrats’ monumental to-do list before the end of the year.”

Avoiding bankruptcy is “just part” of a monumental to-do list, the rest of which amounts to causing it? Within memory, the U.S. dollar was a rock. Now headlines about hair-on-fire improvisations to stave off ruin are routine. Is this Freedonia?

Not that anyone else should be smug. In Canada we don’t have debt ceiling crises because we don’t have a debt ceiling, or showdowns over funding the government because the incumbents can spend at will without any silly old budget.

Just kidding. Not about the budget. About the debt ceiling. We do have one. Which the incumbents can raise at will without any silly old fuss. Because nobody cares.

We all think there’s a free lunch, served in the government cafeteria. And there’d better be, because otherwise someday that ceiling will collapse on us and it will be too late to talk about the obvious cracks.