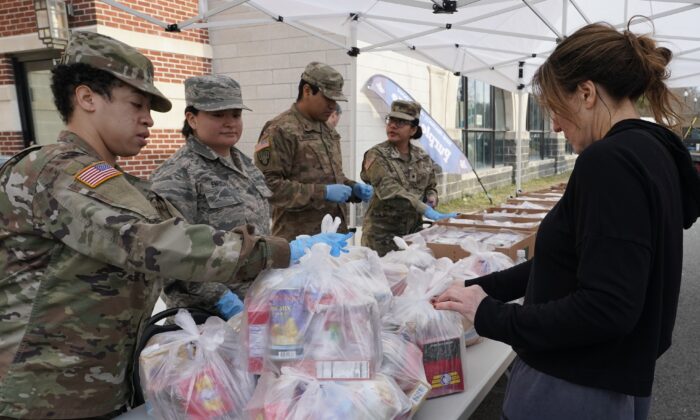 National Guard troops give food to residents of New Rochelle, New York, at New Rochelle High School March 12, 2020. The National Guard is helping to clean surfaces and deliver food in the one-mile radius containment area around a point near a synagogue connected to some existing cases of what appears to be the nation’s biggest cluster of cases of COVID-19. (TIMOTHY A. CLARY/AFP via Getty Images)
Viewpoints

In US, Unity Can Help Defeat Wuhan Virus

After the horrors of the American Civil War, and in the aftermath of a bitterly contested election that pitted Abraham Lincoln against George McClellan, one of his former generals (running on a “peace” platform), Lincoln attempted to bind the nation’s war wounds in his Second Inaugural Address: “With malice toward none, with charity for all, with firmness in the right as God gives us to see the right, let us strive on to finish the work we are in, to bind up the nation’s wounds, to care for him who shall have borne the battle and for his widow and his orphan, to do all which may achieve and cherish a just and lasting peace among ourselves and with all nations.”

Forty-one days later, Lincoln was assassinated by a southern Democrat, the victim of a continuing partisan and sectional rancor that would take another century to begin healing.

Even in America’s darkest hours, it seems, the idea of national unity is more honored in the breach than the observance. No matter how serious the situation, there will always be some—even many—who will try to turn adversity into political advantage.

As Democratic politician Rahm Emanuel famously counseled after the 2008 financial meltdown, “You never want a serious crisis go to waste.” By which he meant: Take every opportunity to push your agenda, even when it bears no relation to the actual issue at hand and has nothing to do with its solution.

Now, facing the looming unknowns of the Wuhan virus crisis, which has thrown the world into a social and economic turmoil that to date far outweighs its actual threat to public health, that’s a luxury we can no longer afford.

An international media that nearly uniformly despises President Donald Trump has marshaled its considerable powers of persuasion to call the Wuhan crisis “Trump’s Katrina” (after the hurricane with which they smeared George W. Bush). With a gibbering Joe Biden emerging as the likely Democrat nominee in the fall, the press realizes this is its last chance to inflict serious damage on Trump before the voters have their say in November.

Globalization has drawn the world’s nations ever closer, not only in terms of trade but in tourism and interpersonal relationships as well. Large countries and super-states, such as the United States, China, India, Russia, and the European Union, have more interaction with each other than ever before. (China has a large economic presence in northern Italy, which is one reason that Lombardy has been so hard hit.)

Even in an age of recrudescent nationalism, the ties that bind are still too tight for comfort.

The seriousness of the Wuhan virus is as yet unknown. Oh, there’s been plenty of speculation, extrapolation from previous flu-like pandemics, malicious scare-mongering, airy reassurances, and just about everything in between. At last count, more than 5,800 people worldwide—only 59 of them Americans, primarily older people with preexisting serious health problems—have died from COVID-19, out of a reported 156,400 confirmed cases. This has caused some to overestimate the mortality rate (the World Health Organization this month pegged it at 3.4 percent). That, however, fails to take into account the large number of people who’ve already recovered without ever realizing they’d been infected—and of those officially infected, nearly 74,000 have already recovered.

Additionally, the quality of health care and medical infrastructure varies greatly from country to country; what can be a roaring epidemic in one place—such as China, where the virus originated, or in Iran, where it has also metastasized—can be a few sniffles in another.

In other words, Wuhan World is not that of the TV show “The Walking Dead,” one in which a single bite is fatal and everybody turns into a zombie in the end. Instead, the real danger appears to be economic and social—panic buying, prophylactic cancellation of just about all public events, from St. Patrick’s Day parades in the United States and Ireland to baseball’s spring training to Sunday Mass across Italy, so far the hardest-hit European country, with more than 1,400 deaths.

Stock markets have cratered, colleges and universities have moved instruction online, international flights have been canceled—Trump recently banned all air travel to and from the Schengen area of passport-free travel in Europe for a month—and even Disneyland is closing its doors for a while. And don’t even think about getting on a cruise ship.

The economic damage, however, can largely be recovered, especially if governments act responsibly. More long-lasting will be the unanticipated consequences of the shutdowns.

For one thing, the internal contradictions inherent in the unwieldy European Union are now being exposed, with countries such as Italy and Norway essentially closing down, and border controls being reimposed throughout the bloc, even as the EU demands that Greece open its besieged borders to a flood of migrants sent westward by Turkish strongman Recep Tayyip Erdogan in a deliberate act of international aggression.

As recently as January, the WHO was advising countries to keep their borders open, but in the face of mounting infections, many are simply ignoring it and hunkering down to weather the storm. Whether such wobbly member states as Greece and Italy—not to mention such nationalist countries as Poland and Hungary, who reject Western Europe’s open-borders fetish—will stay in the union is now an open question.

Here at home, President Donald Trump’s heartfelt request that Democrats and Republicans work together to combat the virus and calm the situation has fallen upon deaf ears. Already, congressional Democrats are trying to strip the administration of its statutory authority to issue travel bans in order to fight the coronavirus with something called the “No Ban Act” that would unconstitutionally transfer control of America’s border from the White House to Congress—even though Dr. Anthony Fauci, director of the National Institute of Allergies and Infectious Diseases, has said the disease in the United States would have been much worse had Trump not restricted travel from China early in the outbreak—a move much derided by Democrats at the time.

Following Emanuel’s dictum, they’ve also introduced pet-project legislation to mandate universal, employer-funded sick leave and increase the welfare program called Medicaid. There’s also no mention of the president’s call for a “payroll tax” (FICA taxes for Social Security and Medicare) holiday through the end of the year to help ease the pain for U.S. taxpayers.

As for civility… forget about it. Hard on the heels of Sen. Chuck Schumer’s (D-N.Y.) thuggish threats against “Gorsuch” and “Kavanaugh” (the gentleman from New York didn’t even give the two associate justices the dignity of their honorifics) over abortion, candidate Joe Biden has openly mocked Trump’s nationwide address, calling the president’s handling of the crisis “a colossal failure,” charging Trump with “dishonesty” and “xenophobia,” and bragging that the Democrats “will lead by science.” Noting the initial exclusion of the United Kingdom and Ireland, where Trump has resort properties, from the European travel ban, the anti-Trump media did its best to ascribe a venal motive even as it admitted that neither Britain nor Ireland are in the Schengen zone.

For his part, the always-combative president took to Twitter the morning after his televised address to whack House Speaker Nancy Pelosi (D-Calif.) for her lukewarm reception of his payroll tax proposal, part of a nearly $1 trillion stimulus plan to offset the economic effects of the virus that also includes a significant rollback of antiquated red-tape regulations that have handcuffed federal health agencies such as the Centers for Disease Control and Prevention and the Food and Drug Administration.

He thus rejoined his war-in-progress with the Democrat leadership that recently gave us both the Mueller special counsel investigation and the fruitless impeachment charade, which was winding down just as the Wuhan virus was ramping up for its global assault on humanity. There’s no love lost between them, and never will be.

Still, there’s only so much even a president can do. Our federal system devolves responsibility right down to the state, town, and community grassroots levels. This virus won’t be licked simply by Washington’s throwing money at it. We all have to pitch in.

So this time, let’s get it right.

“History has proven time and time again, Americans always rise to the challenge and overcome adversity,” Trump said in his closing remarks the other night. “Our future remains brighter than anyone can imagine. Acting with compassion and love, we will heal the sick, care for those in need, help our fellow citizens, and emerge from this challenge stronger and more unified than ever before.”

Noble words. Now let’s see if we can live up to them.