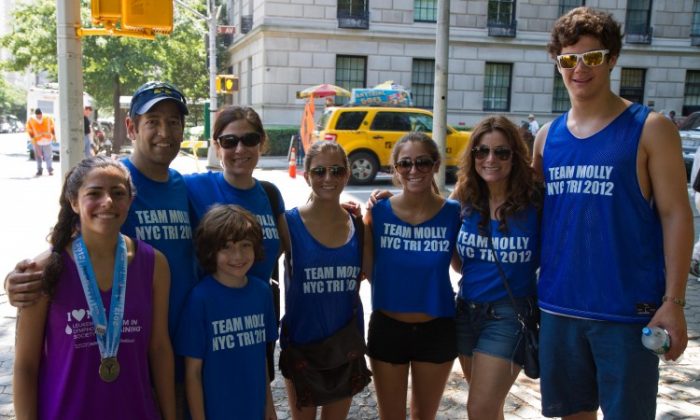 Mohammed Belkhir, who cheered participants on near the end of the triathlon, points a participant toward the finish line. (Zachary Stieber/The Epoch Times)
US

In Triathlon, Support From Family, Friends, and Volunteers

Friends and multiple generations of relatives accompanied Molly Allanoff, a student at New York University, on her way out of Central Park Sunday, after finishing the triathlon. Her grandfather explained the whole family wore blue shirts in support of her that read “Team Molly NYC Tri 2012.”

Highlighting another common theme, Allanoff’s race enabled her to raise more than $8,000 for Leukemia & Lymphoma Society, along with 399 other runners. Molly’s father Dan Anoff has leukemia.

Molly said that although there had been challenges during training, it felt good to finish. “I’m happy I’m done,” she said.

A stone’s throw away from several dad’s traversing the finish line with children in their arms (or running beside them), Elli Orlinsky talked with his wife—while his three kids, aged six, five, and three enjoyed snow cones and frolicked.

Alternating between swimming, biking, and running, Orlinsky trained for his first race for three-and-a-half months, six days a week.

The people of New York City, “even people with no family in the race,” cheered along the entire course—and especially “up by the Henry Hudson,” said a buoyed Orlinsky, expressing his appreciation. “Whoever puts this race on does an incredible job.”

Jordan Jones, 31, of Golden, Colo., won the triathlon, with a finishing time of 1 hour 45 minutes and 4 seconds. Amy Bevilacqua, 39, of Wilton, Conn., was the first woman across the line, with a time of 2 hours, 4 seconds. Overall, Bevilacqua placed 25th.

The first New York City resident to finish was Andrew Kallay, 29, in 18th place with a time of 1 hour, 57 minutes, and 30 seconds. Fifteen New Yorkers placed in the top 50.

The race began on the West Side of Manhattan at 99th Street and the Hudson River. Competitors jumped in the water and swam 1,500 meters (or 20 streets south), before exiting the water and hopping onto bicycles for 40 kilometers, riding on the Henry Hudson Highway to Mosholu Parkway in the Bronx. Then the competitors turned around and rode back the same way. Swimming took more than 11 minutes for competitors, while biking took at least 56 minutes.

After biking to 57th Street, another u-turn took cyclists back to 79th Street, where the 10-kilometer run began. Participants left Riverside Park and entered Central Park—looping around the park, and ending on the 72nd Street Transverse. No one finished the running portion in less than half-an-hour.

Transitioning between swimming, running, and biking is tough, said Vincent Love, a summer intern in the city, and an Economics and International Relations student at Boston College.

Love invested some time during his training to work on the transition from biking to running, which is known as “the bricks.” If done poorly, the transition can bring on cramps, or “the legs will feel like Jell-o,” Love said.

Inside the VIP Tent, a group of volunteers made sure the food table was replenished and the area was clean for competitors and sponsors. Kate Simpson, head of the crew of eight, has raced in the event several times. She was unable to compete this year so decided to volunteer—and liked the view from the tent. She saw the first runner cross the finish line up close. “It’s a lot of fun,” she said, keeping the athletes and sponsors comfortable in the tent, and answering a myriad of questions.

Mohammed Belkhir stood down the road from the finish line, encouraging runners by clapping and saying things like “please keep going, you’re almost there!” Beklhir, one among a handful of people wearing light-blue volunteer shirts, stood out as the most enthusiastic.

After being told there were no spots left to compete this year, someone told Belkhir about volunteering. Belkhir has run in marathons in Boston and London. He said the number of people along the course in New York City cheering for competitors dwarfs the number in other cities.

“I feel what they’re feeling,” said Belkhir, keeping an eye out for the next racer to cheer. “And I need it when I’m in the field.”

Around 3,000 competitors participate in the Aquaphor New York City Triathlon each year.