In Trade, Who Are Our True Friends? 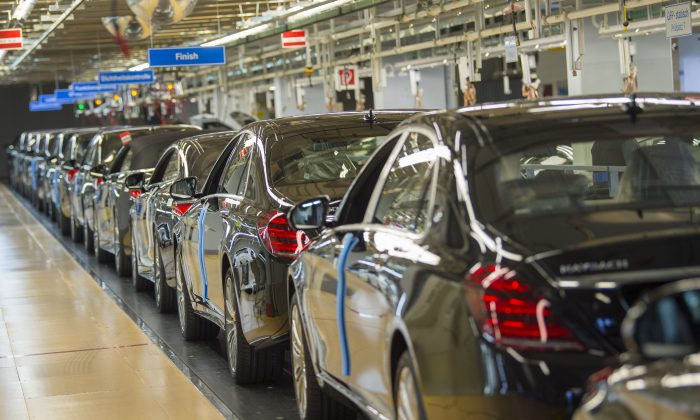 Mercedes-Benz S-Class cars are lined up at the final station of the assembly line on Jan. 24, 2018 at a plant of the Stuttgart-based luxury carmaker Mercedes-Benz in Sindelfingen, southwestern Germany. (THOMAS KIENZLE/AFP/Getty Images)

The editorial boards of The Wall Street Journal and The New York Times are at the opposite ends of the ideological spectrum. They seldom agree. Yet on President Donald Trump’s tariffs on steel and aluminum imports from Canada, Mexico, and the European Union, the two boards are singing in unison that the tariffs are bad and that Trump is mean to friends of the United States.

Given The Wall Street Journal’s reputation of being pro-free trade and pro-globalism, it is not surprising its editorial board is against the tariffs. The editorial argues that Trump’s tariffs could potentially push up import prices, invite retaliation from trading partners, and breed discord among our friends.

Trump would agree with that assessment, at least on a short-term basis. He said the tariffs could cause “pain” in markets, but were necessary for the long-term strength of the American economy.

The New York Times’ editorial, in comparison, is a hodgepodge of speculation and down-right conspiracy theories. For example, the Times believes that Trump intended to lift the sanctions against Chinese telecommunication company ZTE as a quid pro quo, despite offering no evidence. The Times alleges the tariffs will only serve to isolate the United States and its closest friends, hurting American businesses and workers.

Both editorials talked about friends of the United States. But who are our true friends?

True friends treat each other equally and with respect. True friends reciprocate kindness. True friends make efforts to nurture the relationship and mutually benefit from it. Healthy, long-lasting friendships are never one-sided.

One glaring example is automobiles. The EU charges a 10 percent tariff on American cars, while the European cars only face a 2.5 percent import duty in the United States. In 2016, Japan ran a $68.9 billion trade surplus with the United States. A large share of the Japanese surplus, $39.3 billion, came from automotive exports. In the same year, the U.S. carmakers sold $518 million worth of American cars in Japan. The EU and Japan are bleeding us dry through trade, just like China, albeit on a smaller scale.

Those who befriend us while taking advantage of us and profiting from us are not our true friends.

Mexico is America’s next-door neighbor. The country has benefited greatly from the North American Free Trade Agreement (NAFTA). Since NAFTA went into effect, the Mexican manufacturing sector boomed. In 1993, exports only amounted to 8.56 percent of Mexico’s GDP. The share grew to 36.95 percent in 2013. Mexico received almost a half trillion dollars of foreign direct investment since 1994, mostly from the United States.

How does Mexico thank us? By allowing millions of Mexicans and Central Americans to enter the United States illegally. Illegal crossings of the Mexico–United States border always existed, but NAFTA increased this immigration significantly. According to the Pew Research Center’s estimate, there were more than 11 million illegal immigrants in the United States in 2015, half of which were of Mexican origin. As recently as 2005—10 years after NAFTA was enacted—the Mexican government published a brochure that instructs migrants on how to cross the border illegally and live in the United States without being detected.

Those who mooch off us and refuse to take personal responsibility are not our true friends.

Then there is Canada, which has always been regarded as the closest ally of the United States. It is probably not an exaggeration to say no two sovereign nations are closer culturally, economically, politically, and militarily than the United States and Canada. But our closest ally also ran a small but tenacious trade surplus in goods against the United States in the past two decades. The United States accused Canada of providing illegal subsidies to its lumber industry and threatened to slap a tariff on the $5.5 billion trade.

After World War II, U.S. foreign policy held that economic development and prosperity were the most potent means to maintain peace. Building trade partnerships with the war-ravaged European and Asian countries was considered the quickest way to get them back on their feet. So the United States tolerated many one-sided deals.

The measures were necessary then. But times have changed. The European and Asian allies of the United States are not the “weaklings” they once were. They are the equals of the United States and should behave as such. Our allies should not blame Trump for normalizing the trade relationships. The United States made a conscientious decision to help after the war. It has the right to stop any time it wants.