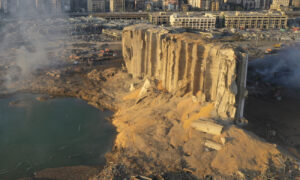 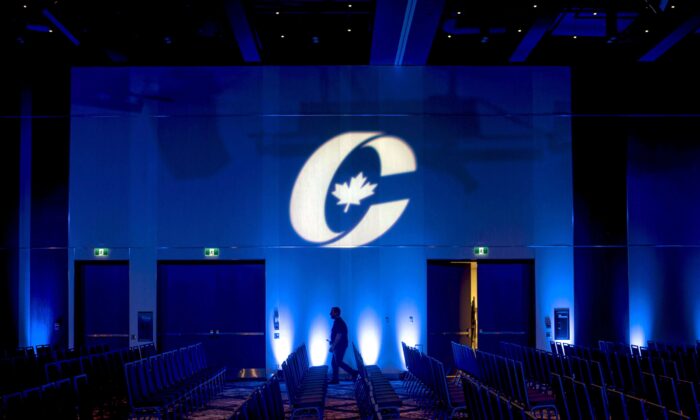 The Conservative Party logo is seen before the opening of the Party's national convention in Halifax on August 23, 2018. (The Canadian Press/Darren Calabrese)
Canada

In Their Own Words: Conservative Leadership Candidates Weigh In on Why They Are the Best Choice

From wanting to reduce the size of government, to shrinking the tax burden, to scrapping the carbon tax, as well as boosting the energy sector and taking a harder line on China, there are many things the four Conservative leadership candidates agree on.

But there are other political issues they say sets them apart from each other—a difference that could be the deciding factor on who should be the next leader of the party, which will be announced once all the mailed-in ballots are counted after Aug. 21.

Now, just days to go before the voting deadline, The Epoch Times talked with each candidate about why they should be the chosen party leader. Erin O’Toole, Derek Sloan, and Leslyn Lewis were interviewed by phone,
while Peter MacKay emailed his comments.

Here are the responses of the candidates in alphabetical order.

The daughter of first-generation immigrants from Jamaica, Leslyn Lewis came to Canada as a five-year-old. After college, she worked hard to obtain a master’s degree in environmental studies and PhD in Law before becoming a successful lawyer in Toronto.

“I think people see in my life story an example of what they want Canada to be—a country where you can work hard and succeed, and where any citizen can aspire to hold the highest office in the land,” Lewis said when asked what makes her the best candidate to lead the Conservative Party.

A political novice, Lewis decided to take the leap into politics because she was concerned about the direction the country is headed—in particular the erosion of fundamental freedoms and a weakening economy—and worried her children wouldn’t get the same opportunities she had.

But her newcomer status in the political arena is actually one of her strengths, she said—one that can also help her to transcend ideological divisions within the party itself and Canada as a whole.

“As a political outsider I don’t have the baggage of past governments or party leaders and can objectively unite our party,” she said. “A united Conservative party is the only way we can win the next election and build a prosperous and united Canada.”

Seen alongside Derek Sloan as the more socially conservative of the candidates, Lewis has run a campaign based on four pillars: Upholding family as the cornerstone of society; protecting fundamental freedoms; supporting the vulnerable; and upholding fiscal responsibility.

She has also been upfront about her beliefs on socially conservative issues—part of her “no hidden agenda” campaign—such as her pro-life stance on abortion.

“My ability to speak freely and respectfully about controversial issues reminds Canadians that even our simplest freedoms are worth fighting for,” she said, adding she believes her stance reflects that of the majority of Canadians.

She notes, however, that her platform is “expansive” and goes beyond social conservatism to include a focus on issues like the economy and resource development, the environment, support for Indigenous issues, a post-pandemic recovery plan, and more.

“I believe that in addition to your values, you’re looking at things that face every Canadian, and every Canadian is concerned about the economy, and the environment, and health care, and other democratic values,” she said.

Peter MacKay touts his decades of political experience and instrumental role in founding the modern-day Conservative Party of Canada as his competitive advantage in moving Canada forward amid unprecedented challenges.

“I was at the cabinet table for 10 years, including when we faced a deep worldwide economic crisis and where we brought the books back into balance,” he said, adding that he aims to form a majority Conservative government in the next election.

“I am the only candidate with the experience to unite our party, build a bigger tent, and lead it to victory against Justin Trudeau and the Liberals in the next election.”

MacKay says Canada is facing a “health, economic, and national unity crisis” as the country grapples with Western alienation and a debt burden that ballooned to $100 billion even before the pandemic hit. The deficit now hovers around $340 billion.

“I will be Canada’s jobs prime minister,” he said. “I will unify the nation to fight the current recession and the worst health crisis in generations.”

His platform on jobs includes getting Canada’s natural resources to market, supporting Canadian-made research, technology, and manufacturing endeavours, and reducing tax burdens and supporting small businesses, among other measures to improve consumer confidence and boost the economy.

MacKay is the least socially conservative of the candidates—he has publically stated he is pro-choice and pro-equal marriage—but he said he isn’t concerned about alienating voters who are social conservatives.

MacKay said he will support issues such as conscience rights for medical professionals, re-establish the Office of Religious Freedoms, allow free votes for MPs on matters of conscience, scrap the Liberals’ values-test on accessing government programs, and continue to support a tough-on-crime approach.

As a Member of Parliament and shadow minister of foreign affairs, Erin O’Toole says he is the best option for Conservative leadership because he’s “ready to go on day one.”

As a current and seasoned MP, he says he’s the best-positioned to hit the ground running if an election is called.

“If we don’t have a leader that can hold the government to account in the House and demonstrate to Canadians that we are a government waiting, a government that can get us back on track economically and [from] the national unity perspective and our reputation around the world, we won’t win that trust back of Canadians,” he said.

O’Toole said his campaign slogan “True Blue Leadership” distinguishes him as someone who stands up for “true conservative principles,” while acknowledging that conservatives define themselves “in a variety of different ways.”

“I am a liberty free-market conservative who believes in personal responsibility, initiative, principled foreign policy, strong and safe communities. I obviously served in the military, so military, and support for our allies and values around the world are important to me. So those are kind of true conservative principles,” he said.

The biggest challenge Canada now faces, O’Toole said, is national unity in the era of unprecedented Western alienation and a newly-formed Bloc Quebecois, as well as the economic fallout from COVID-19: “the runaway deficit, mounting debt, and high unemployment.”

He said improving Canada’s competitiveness and influence on the world stage would be major priorities for him.

“In the last few years, $150 billion of capital has left Canada because we’re seen as a high tax, high regulatory, virtue signalling-led environment,” he said.

“We have to address that because there’s now a global competition for talent, for capital investments, for expansion of existing operations.”

In the post-pandemic world O’Toole predicts there will be “a realignment of trade and diplomatic relations to counterbalance the bad actions of China,” which he believes is an opportunity for Canada to assert itself as a leader.

“I want Canada to be at the forefront of that, not dragged along,” he said, adding he’d like to see Canada’s China policy align more closely with that of Australia and the United States.

“This global reliance realignment requires a serious and an interest-based foreign policy [for] Canada, not this virtue-signalling, chasing the U.N. seat. … We have gone down in the eyes of our friends around the world. We have to halt that decline.”

Derek Sloan, MP for Hastings-Lennox & Addington in eastern Ontario, a lawyer, and former small business owner, says he’s the “most socially conservative” of the four candidates, which he believes is his strength.

It’s also reflected in his campaign slogan: “Conservative. Without Apology.”

Sloan’s campaign promises to take a strong stand against “radical progressivism.” He sees the “damage to free speech, freedom of religion, and freedom of conscience happening in Canada” as one of the biggest threats to the country.

This culture (or “cancel culture”) often targets conservative viewpoints and seeks to silence conservative voices, he says, which extends to self-censorship within the Conservative Party itself.

“Derek will never make anyone apologize for being a Conservative,” reads his website. “He will encourage members to speak the truth no matter how uncomfortable it makes the increasingly politically correct culture, because that’s not merely what the party needs. It’s what Canada needs, now more than ever.

“Conservatives have been playing it safe for far too long, focusing on narrow economic issues which, though important, don’t begin to cover the gamut of our national and social needs.”

Sloan’s platform includes measures to improve free speech within Canadian laws, online, on university campuses, and within political parties. He is also pro-life and supports rights for health care professionals that refuse to perform abortions or medically assististed death, as well as stronger parental rights in controversial areas such as conversion therapy and sex-change surgery on children.

He supports pipelines and building a strong energy sector, boosting national defence spending, revocation of Canadian citizenship for dual citizens convicted of terrorism, and reducing target immigration to 150,000 per year.

Canadian sovereignty is one of Sloan’s key focuses, which includes a Canada-first strategy that would stop the practice of signing onto certain international treaties that he says don’t serve Canadian interests.

“I’m the only candidate who’s talking about getting out of the Paris Accord, defunding the WHO, getting out of certain U.N. things we’ve signed on to like the mass migration contract,” he said, adding he’s the most populist of the conservative candidates.

“I certainly have the most bold and conservative plan of all, in my opinion.”

With reporting by Michael Wing