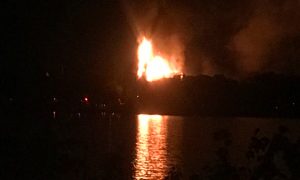 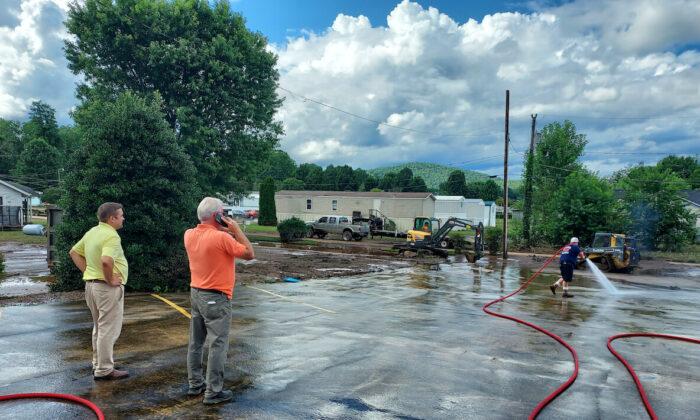 In the Wake of Tropical Depression Fred, a Western North Carolina Church Lends a Hand

From providing disaster relief by ship to islands in the Caribbean, to assisting those in need at ground zero in a flooded local community, Anchor Baptist Church has continued its 30-year tradition of helping people left helpless in the wake of a storm.

The sun appeared an anomaly after Tropical Depression Fred dropped up to 17 inches of rain in some areas in the western region over a period of 72 hours on Monday and Tuesday, resulting in flash flooding that has caused catastrophic damage for many families, with—as of Thursday—20 people missing and two confirmed deaths in Haywood County, which includes Waynesville and part of Asheville.

The Davidson River in Transylvania County escaped over the banks to drench the valley during the storm, when the Little River Fire Department, led by Fire Chief Jason Merrill, performed swift water recoveries throughout the night.

Beyond the Scope of Our Forecast

After the residents had been evacuated from their homes, the rescue teams returned for their pets, but none survived—except for a cat.

Barton said, though there were no human casualties, five dogs drowned, along with chickens, and Pogona bearded dragons that were being raised as pets.

“That was a low point for me,” Barton told The Epoch Times. “The owners never dreamed the water could have gotten that high; they never imagined it could have gotten up to the windows. It was beyond the scope of our forecast.”

As two skid-steer loaders cleared the heaps of mud from Cemetery Road that runs through the valley, Caleb Curtis, the pastor at Calvary Baptist Mission, and Jay Kaiser, set up a supply tent, with supplies provided from Anchor Baptist’s warehouse and Lowe’s Home Improvement in Brevard, North Carolina.

Having arrived the night before to witness the flooding, Curtis told The Epoch Times, “It was a nightmare.”

Gov. Roy Cooper declared a state of emergency on Aug. 18, stating that both Haywood and Transylvania counties were the hardest hit.

Transylvania County officials gave an Aug. 18 estimate of over $11 million in assessed damages, though officials said that number is expected to increase as more sites are identified and assessed.

For Barton, the week began with Anchor Baptist Church in preparation to assist islanders of the Caribbean impacted by a volcanic eruption and an earthquake.

On the island of Saint Vincent, the largest island within the country of Saint Vincent and the Grenadines in the Caribbean Sea, the La Soufriere volcano erupted in April, its fifth since the year 1718.

In December 2020, dying vegetation around the volcano gave an early signal for the eruption, prompting evacuation.

To better respond to these disasters, Anchor Baptist Missions International (ABMI), in partnership with other churches, had purchased a retired U.S. Navy ship and named it Sea Hope, ownership around which itself was formed as a nonprofit corporation.

There were plans to bring a second shipment of food and medical supplies to Saint Vincent when the earthquake hit Haiti on Saturday.

“Now that mission has been scrubbed and we are going to Haiti,” Barton said.

The ship is docked at a shipyard in San Juan, Puerto Rico, being loaded to take supplies to Haiti.

Barton’s previous disaster relief missions used planes, such as in 2017, when ABMI brought supplies to the Bahamas after it was devastated by Hurricane Maria in 2017.

However, the 180-foot-long, 24-foot-wide, and 220-ton vessel can carry in one trip what it took 40 airplanes to carry in and out the Bahamas after Maria.

The mission of disaster relief, for Barton, began during Hurricane Hugo in 1989, when he was attending a press conference in Charleston, South Carolina, during which he was able to negotiate three tractor trailers of supplies to take to a neglected part of South Carolina.

Barton was attending the press conference with his press credentials he had through his church’s ongoing AM and online radio station, WGCR.

“There was one county that had seen no relief, yet there was this all of these supplies in the parking lot that no one would unload, but the officials didn’t like me asking that question on live television, so they gave me the supplies and got rid of me,” Barton said.

He learned very quickly, he said, about how not to get supplies distributed.

“I saw bureaucratic lag that would make a man sick to his stomach,” Barton said. “I saw big wheels that turned very slow.”

What he found was how to bypass government agencies and energize local people and pastors instead, he said.

“I learned very quickly, if they aren’t badly damaged, empower the local churches, and when we went through churches, I found there was no government lag,” Barton said. “Local churches get straight to work.”

From its massive warehouse of supplies, ABMI supplied some of the hardest hit regions across the world with food, medical and hygiene supplies, clothing, and clean water.

For 12 weeks during the COVID-19 lockdowns in Haiti, ABMI was feeding 1,800 families a week through a network of churches.

Based on previous experience, Barton said, whether it be militia governments in Haiti, or the Federal Emergency Management Agency during ABMI’s work after Hurricane Katrina, provisions will “come up missing” if those organizations are relied upon, which is why using planes, and now a naval ship, became a game changer in getting supplies directly to the network of churches in each region.

In his work, Barton said he’s witnessed complicated, seemingly impossible situations resolve during the planning process to help those in need.

“Whether you believe in miracles or not, these are situations that coincidences could not repeat again in a million years,” Barton said.

It’s those situations that renew his strength when the inevitable “low points” come, he said, adding that, even the crew of volunteers ABMI sends to help in aid must be rotated to prevent them from burning out.

Though much tragedy and disarray has descended upon western North Carolina this week, it’s those “coincidental” faith builders that Barton said he knows will bring hope, and with hope, reconstruction.

“Some people call them coincidences,” Barton said. “I call them miracles.”