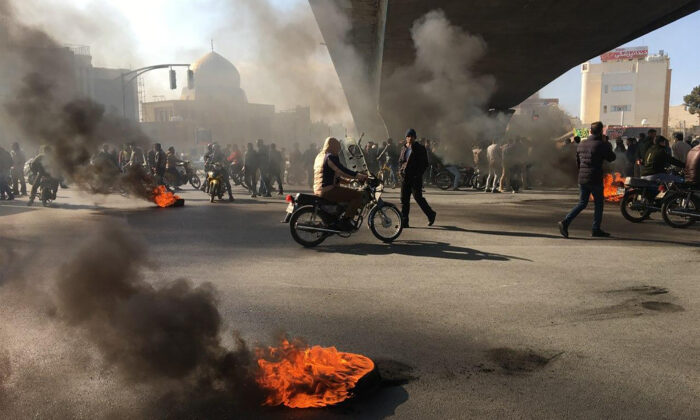 Iranian protesters rally amid burning tires during a demonstration against an increase in gasoline prices, in the central city of Isfahan on November 16, 2019. (Photo by -/AFP via Getty Images)
Viewpoints

In the Face of Continuing Protests, Mullahs Reload

We only have approximate figures concerning the recent bloodbath in Iran. According to recent data, 900 Iranians were killed by security forces, and many thousands, more than 10,000 total, were thrown into prison. Regime leaders have announced the imminent public execution of many prisoners, an obvious effort to cow the people into calling off the ongoing demonstrations.

Thus far, these have been the most intense anti-regime demonstrations in the country’s history, not at all limited to a handful of towns and cities, but spread out across the map. Moreover, the protests have spread throughout society, from the well-to-do neighborhoods in the major cities to the smaller, poorer towns and villages in the agricultural domains. The regime treats them all the same, and political officials now routinely order the demonstrators shot, whatever their age.

So far, the uprising has continued, and both sides are preparing for further violence, in Iran and in neighboring states. Lebanon has had some of the most boisterous protests, as has Iraq, now without an effective government. And, as editors of the Free Iran Herald detail in their invaluable daily summary of current events carried in the Gateway Pundit, workers’ organizations are not backing down at all:

“The Defenders of Labor Rights Association released a statement in support of the Nov. 15 uprising, which reads, in part: ‘These protests, which took place in almost all cities across the country, reflect the widespread discontent with the current political and economic system.'”

According to The Gateway Pundit, “A strike continues at the Haft-Tappeh sugar growing and refining complex in city of Shoosh, in Iran’s southwestern province of Khuzestan, with picketing workers holding a large rally on Monday to show their refusal of a deal offered by the company’s CEO. The strike has intermittently started and stopped as management has repeatedly promised to pay the owed back wages, and then always refused to honor their commitment. The picketers say they will not resume working until they are given all the wages they are owed, the regime frees their imprisoned union leaders, and the union is allowed to look at the company’s accounting records.”

This is replicated all over Iran, as workers demand payment for services long since rendered. The bulk of big businesses are owned either directly by the government or by the regime institutions that oppress the hard-working but almost never paid laborers who were the first to launch the recent demonstrations. Few recognize the substantial segment of Iranian enterprises owned and run by the Revolutionary Guards Corps, Supreme Leader Ali Khamenei and his cohorts, and top levels of the clergy.

It thus becomes easier to understand why the proximate cause of the recent demonstrations was a sudden increase in the cost of gasoline. The country has been wrecked, there has been a dramatic drop in the availability of fresh water, even nominally employed people aren’t paid the salaries owed to them, the cost of living increases daily, and the slightest grumbling brings out the security forces. The protests are now endemic throughout the Iranian sphere of influence, and the Tehran regime is unable to contain them.

In the past week, the Iranian consulate in Baghdad has been torched three times, and the beltway around Beirut was shut down by protests. It was only recently that it was commonly believed that Iran was the dominant force in the region, but today, more and more people are wondering how much longer the regime can hold onto its own power, let alone expand its hold over neighboring areas.

Even efforts to expand Iranian sway over West European governments are coming up short. Iran’s Foreign Minister Mohammad Javad Zarif just canceled a trip to Rome after the Italian human rights federation wrote an impassioned letter to the government decrying the harsh measures against Iranian protestors. Italy has long advocated “normal” relations between the two countries, but Zarif’s behavior shows that the repression of the demonstrations is having a corrosive effect. Given the weight of Italian trade unions, Zarif was undoubtedly warned away from the visit.

The question remains: What is the best strategy for the Trump administration? As Secretary of State Mike Pompeo and Trump prepare for new sanctions, it is long since time for Trump to address the Iranian people directly, and to provide the demonstrators with the revolutionary technology they need to coordinate efforts all over the Middle East. Words are not enough, all they do is expose the United States as a believer in sanctions. The Iranian regime can find ways to elude the crush of sanctions.

Khamenei will fight on, but if the United States enters the fray, along with whatever European countries are prepared to join in support of the ongoing revolt, we may yet win this thing.

Michael Ledeen is a freedom scholar at Foundation for Defense of Democracies. He has served as a consultant to the National Security Council and the departments of State and Defense, and as a special adviser to the Secretary of State. He is the author of 35 books, most recently “Field of Fight: How to Win the War Against Radical Islam and its Allies,” co-authored with retired Lt. Gen. Michael T. Flynn.

Michael Ledeen
Follow
Michael Ledeen is freedom scholar at Foundation for Defense of Democracies. He has served as a consultant to the National Security Council and the departments of State and Defense, and as a special adviser to the Secretary of State. He is the author of 35 books, most recently “Field of Fight: How to Win the War Against Radical Islam and its Allies,” co-authored with retired Lt. Gen. Michael T. Flynn.