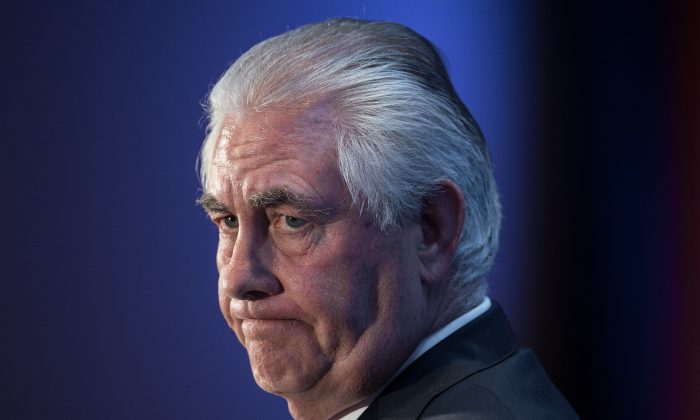 Exxon Mobil chairman and CEO Rex Tillerson at a discussion on energy innovations, organized by the Economic Club of Washington, in Washington, D.C., on March 12, 2015. (Nicholas Kamm/AFP/Getty Images)
Business & Markets

In Targeting Exxon on Climate, New York Puts All Corporations on Notice

In a move that is potentially transformative, the New York attorney general is investigating Exxon for financial fraud.

The company made public statements questioning the science of climate change in years past, even as its own in-house scientists informed company executives that precisely the opposite was the case. Put in simpler terms, the New York investigation is exploring whether the company lied to investors and consumers in order to place its own profits ahead of the public good.

But while the case focuses specifically on Exxon’s activities, its impact will be felt by many other corporations accused of misleading the public and investors.

While the case focuses specifically on Exxon’s activities, its impact will be felt by many other corporations accused of misleading the public and investors.

Numerous authors have documented the ways that companies and other parties “bend” science to advance their goals. For example, investigative accounts reveal how companies hire researchers to conduct research with a specific end in mind to bolster their own self-serving positions. These actors can also hire skeptic scientists (“merchants of doubt”) to poke holes in unwelcome research— “manufacturing doubt,” as David Michaels put it in his book on this corporate technique.

Some companies even attack individual researchers professionally for producing research that is unwelcome, using a range of legally sanctioned techniques such as launching scientific misconduct allegations, inundating the researcher with subpoenas seeking all records of ongoing and past research, harassing researchers with open records requests or a mix of the above.

In a book called “Bending Science,” Tom McGarity and I identify dozens of different techniques developed over the years to accomplish this science-bending by more corporations (and other actors, including the government) than we dared count.

The current allegations against Exxon—namely that the company hired skeptics to cast doubt on the scientific research underlying climate change—come right out of this same playbook. Thus while Exxon’s actions, if ultimately proven to be true, will be upsetting, they are no different from numerous other corporations that used the same tactics.

And although Exxon might face negative publicity in the short term, it could actually find itself far better off than other corporations whose deeply held secrets were linked causally to thousands of preventable deaths and injuries, as was the case for asbestos, tobacco, the Dalkon Shield, the pregnancy drug DES, lead, and other hazardous products.

Exxon in the Bull’s Eye

At the heart of the trouble is the complicity of the law in tolerating this bending of science. Historically, the legal system has not only allowed but in some cases has even aggravated these practices.

Hiring scientists to produce research or launch critiques that are manufactured and have a specific end in mind is not only allowed, it may provide companies with decades of profits that they would otherwise lose if they were forthright about the state of the research.

Under current rules, there are effectively no penalties for filing harassing subpoenas, open records claims, or misconduct allegations against a scientist to attempt to intimidate him or halt his work. In such a laissez-faire system, where lies are often far more convenient (and profit-bearing) than the truth, it is easy to understand why a rational corporation would go to great efforts to bend the science to their ends.

To make matters worse, even after incriminating research is discovered and a company is outed in the tort system (although this can be forestalled through “sealed settlements” that prevent the disclosure of incriminating research), the company may come out ahead financially as a result of delaying the bad news. And of course there is also the possibility that the company might not be caught at all.

Given the legal tolerance for corporate misrepresentation of science, Exxon may well wonder why it is being picked on. Compared with the corporations of the past, Exxon’s offenses—at least those currently under investigation—seem almost quaint.

Ironically, Exxon’s biggest mistake may well have been trying to have its cake and eat it too—in this case, actually learning of and acting on the truth about climate science in the first place.

As reported in a 2012 Union of Concerned Scientist Report on the corporate financing of climate deniers, Exxon ranks among the top of the hedge betters; it appears to have supported a number of initiatives on both climate research and climate-denying work. Most of its competitors, by contrast, appear to be on one side or the other. By playing both sides of the science, Exxon might have unwittingly opened itself up to greater vulnerability for charges of corporate dishonesty.

Given the environment in which corporations’ manipulation of science is both commonplace and legally tolerated, the New York investigation has the potential to be transformative. Rather than seek damages as a plaintiff in a tort case (as the attorneys general did in the tobacco litigation), the end goal of the New York investigation is to identify and potentially penalize scientific manipulations and lies.

Working under New York’s broad-reaching Martin Act, the attorney general’s investigation will send a clear message that lying about public health and environmental science is illegal and perhaps even criminal, at least in the state of New York.

In the end, Exxon may convince the attorney general that it did not support climate deniers knowingly. Or perhaps it may be able to prove that it did nothing wrong at all.

But that will not undo the fact that the New York attorney general is now officially on the prowl for corporate dishonesty and is willing to levy sanctions against any they discover to be engaging in the practice. In other words, the consequences might not fall on Exxon but will almost certainly affect another company less able to extract itself from its own public day of reckoning.

Even more importantly, through the example of the state of New York, it is possible that the rest of the country will wake up and join in legally penalizing corporate irresponsibility.

If we are to live in a country where the market reigns, we should at least demand that our corporations tell the truth. Consequently, regardless of the ultimate guilt or innocence of Exxon, the New York’s investigation is an important step in the right direction, toward better science and a healthier corporate landscape.

Wendy E. Wagner is a professor of law at the University of Texas at Austin. This article was previously published on TheConversation.com