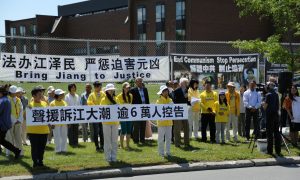 In Sydney, an Appeal to End a Persecution

SYDNEY—In the heart of Sydney’s business and finance district, over a hundred adherents of a Chinese spiritual discipline held an all-day rally to raise awareness of a severe 16 year-long persecution by the Chinese Communist Party.

“The persecution against Falun Gong in China destroyed my life and my family,” said 17-year-old Eric Jia. The teenager was just a toddler when he last saw his father Ye Jia, who refused to go home after his stint in a labor camp for fear that the police would harass his family because he practiced Falun Gong. Ye Jia was arrested again during the 2008 Beijing Olympics and hasn’t been heard from since. In January 2012, Eric and his mother Li Liu fled China to Australia.

The Jia family’s story is by no means an isolated incident.

Since the Chinese regime started to suppress Falun Gong on the behest of former Communist Party leader Jiang Zemin on July 20, 1999, “millions of families in China have been torn apart,” said Dr Lucy Zhao, President of the Falun Dafa Association Australia.

Over 3,800 practitioners have lost their lives during the persecution, and hundreds of thousands more were incarcerated in prison and labor camps, according to Minghui, an overseas website that documents the persecution of Falun Gong. Researchers have gathered evidence that military and public hospitals in China are forcibly removing the organs of Falun Gong and profiting from transplantation.

“To kidnap them to take their organs out and sell them is just horrific,” said passerby Daniel Kent to Epoch Times. Kent, who has been investigating China’s human rights abuses, expressed sympathies for Falun Gong and house Christians in China.

Ying Li, a Falun Gong practitioner at the rally, was very nearly a victim of organ harvesting when she was detained in Shanghai from 2001 to 2003. Although Li told prison staff that she didn’t want to give a blood sample, they grabbed her arm and “forcefully stabbed the needle in.” She was eventually rescued in October 2003 after her fiance started a rescue campaign in Australia.

“Australia is a very compassionate country,” said Li, who is looking to free her sister Yaping Li from Chinese detention. “I ask for Australian’s support because what is happening in China violates human values.”

“It’s particularly sad that it happens to a group of people who just want to meditate, which is one of the best things any of us can do for ourselves,” said Venetia Brown, a commercial lawyer working in the area who stopped to observe the rally. “Why would you persecute something so peaceful?”

This year, Falun Gong practitioners are looking for justice from the Party’s own legal system. Eric Jia and his mother recently joined more than 80,000 others in filing criminal complaints against Jiang Zemin with the highest public prosecutor’s office and the courts.

Two guest speakers at the rally, local councillor James Shaw and political commentator Bob Vinnicombe, felt that the Australian government has an “obligation” to look into the persecution of Falun Gong but isn’t doing enough.