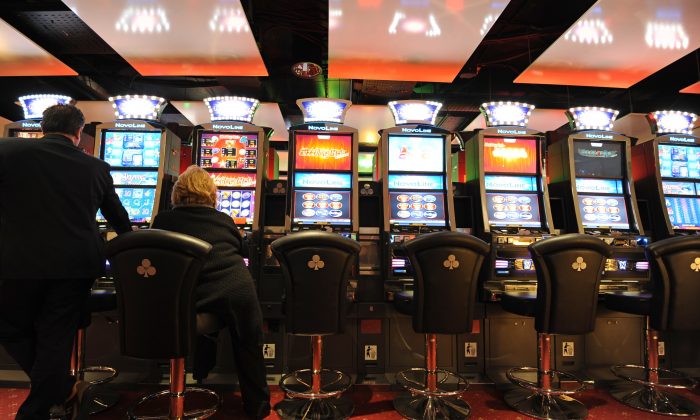 People play on slot machines in the 'Bingo Re' (King of bingo) gambling arcade in Rome, Italy, on March 5, 2012. Despite economic recession, Italians are keen gamblers. (Andreas Solaro/AFP/Getty Images)
Judiciary

A Native American tribe urged the Supreme Court to allow it to continue to offer bingo games on its land even though Texas maintains state law prohibits tribes from running gaming operations.

If the Texas tribe were to win, there could be a ripple effect, spurring more tribe-controlled casinos and gaming operations. Gaming is an industry euphemism for gambling.

The Biden administration argued it is unfair that the tribe does not enjoy the same gaming rights that many other tribes around the nation already have.

The Ysleta del Sur Pueblo, sometimes called simply the Pueblo, is one of only three federally recognized Indian tribes and sovereign nations in Texas. The Pueblo was established by the tribal community known as the Tigua in 1682.

While the Pueblo wants to continue offering bingo games at Speaking Rock Entertainment Center in El Paso, Texas sued, arguing only certain charitable organizations may run bingo games, and that because the tribe is subject to the Texas Bingo Enabling Act, its bingo operations are forbidden.

The tribe, in turn, argues that the Texas law violates its sovereignty.

The Supreme Court held in U.S. v. Mitchell (1983) that “a general trust relationship between the United States and the Indian people” has long existed. That the federal government has a duty to honor its treaty commitments is called the doctrine of trust responsibility.

In 1988, Congress approved the Indian Gaming Regulatory Act (IGRA), which secured tribes’ right to offer certain gaming activities on sovereign land if those activities are otherwise legal in their state.

The U.S. Court of Appeals for the 5th Circuit sided with Texas, holding that bingo games at Speaking Rock were governed by the 1987 law and therefore unlawful. IGRA lets tribes run bingo games under the Class II gaming category. Class III gaming, such as table games and slot machines, can’t be offered unless the tribal and state governments enter into a compact.

Tribal attorney Brant C. Martin told the Supreme Court the issue here “is whether the Restoration Act subjects the Pueblo to Texas’s time, place, and manner restrictions as it relates to games that Texas does not flatly prohibit.”

“It does not,” Martin said. The Restoration Act “specifically foreclosed Texas’s regulatory authority over the tribes’ gaming activities.”

Principal Deputy Texas Solicitor General Lanora Pettit said the Pueblo should be satisfied with the gains it made by way of the Restoration Act.

“Everyone made concessions,” which were incorporated in the act. “The tribe got its recognition and may offer gambling to the same extent as other Texans, but further gambling is banned under federal law.”

No, Martin replied. “I think the state of Texas thinks it looks like a slot machine,” he said.

“I would say it looks like an electronic bingo machine that has a bingo —” the lawyer said as he was cut off by Roberts.

Followed by audible laughter in the courtroom, the chief justice said, “What makes it look like a bingo machine?”

Justice Samuel Alito asked Martin “how a court is going to decide whether these machines, which I don’t have a very clear picture of in my mind, are bingo or not bingo.”

“If they are not bingo, they’re something else. Let’s say they’re dingo” Alito said, as more laughter erupted.

“And Texas prohibits dingo, then you can’t have them, right?”

Alito continued: “How is the person who has to decide this going to decide whether this thing that’s not exactly – it’s not the kind of bingo … you expect people to be playing in church, or at the Elks. It’s something different. How do you decide whether that’s bingo?”

Martin replied, “I think that you don’t have to decide this.”

“No, we don’t have to, but somebody does,” Alito said.

Martin said both Texas and federal law have their own definitions of bingo.

Justice Stephen Breyer then jumped in. “Can we ask my grandmother?” he said, which led to more laughter.

Justice Amy Coney Barrett said, “I gather it’s Texas’ position that these electronic machines would not count as bingo?”

“Yes, Your Honor, because they are slot machines,” Pettit said.

“They do not have the competitive aspect of bingo. … You are matching numbers and the first person to reach a particular pattern wins. And here you have one card and it is an instant game that is drawn against … historic bingo draw[s], and that is just not bingo.”