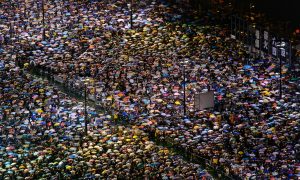 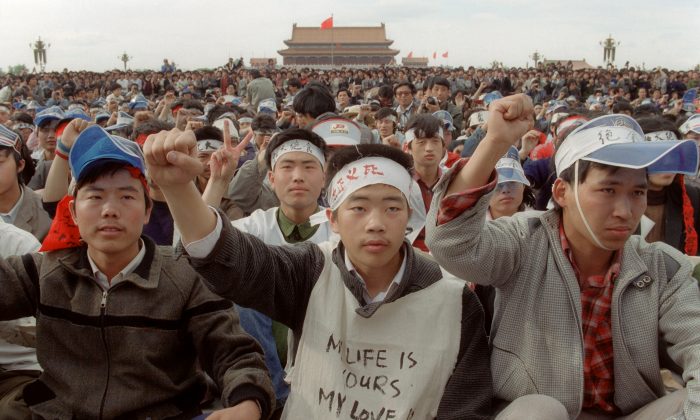 Students from Beijing University stage a huge demonstration 18 May 1989 at Tiananmen Square as they start an unlimited hunger strike as the part of mass pro-democracy protest against the Chinese government. (Catherine Henriette/AFP/Getty Images)
China

Chinese activists in mainland China are commemorating the tragic events 26 years ago on June 4 by going on a 24-hour long hunger strike—the nonviolent protest of choice of the students seeking democratic reform in China on Tiananmen Square and while in detention.

Duan Qixian told Epoch Times, Chinese edition that the hunger strike, a yearly tradition, has three aims: To pay homage to the souls of the victims; to support those who have been suppressed in recent years; and to let more people know about the events on Tiananmen Square.

“I do not expect the Chinese Communist Party (CCP) to ‘rehabilitate’ the victims, and the CCP is not qualified to do any ‘rehabilitation,'” said Duan. “We hope that more people will learn about June 4, and maintain the will to fight.”

In April 1989, tens of thousands of students marched to Tiananmen Square in Beijing to petition then premier Li Peng over inadequate public funeral arrangements for the recently deceased reformist Politburo member Hu Yaobang.

The students eventually got organized and demanded that the Chinese Communist Party start democratic reform in China. When the Party top brass refused to give in, the students began a hunger strike on May 13. They only stopped on May 19 after the soon to be purged reformist premier Zhao Ziyang’s visit to Tiananmen Square and impassioned plea—”You are not like us, we are already old, so we do not matter.”

The students stayed on Tiananmen, however, and then Chinese leader Deng Xiaoping ordered the People’s Liberation Army to move in on the students on June 4. The troops opened fire, killing hundreds, and possibly thousands, of students (no official death toll has been released until this day). During the protest and in the weeks and months that followed, 10,000 were estimated to have been arrested, according to CNN. While in detention, several students went on hunger strikes to protest their plight.

In memory of the lives lost in Tiananmen Square and the incarcerated students, hunger strikes have since become mainstay at annual June 4 commemoration events.