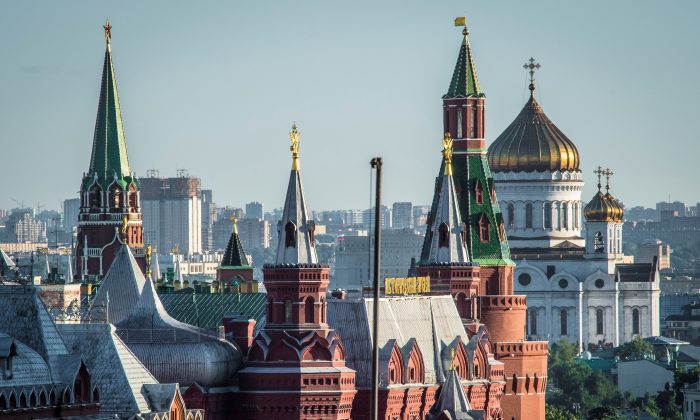 A view of Moscow in July 2017. (MLADEN ANTONOV/AFP/Getty Images)
Viewpoints

In Sowing Chaos, the Media Has Done Russia’s Work

The Trump–Russia probe came to its official end April 18, at least legally, when Attorney General William Barr outlined his conclusions from the special counsel report that the Trump campaign didn’t collude with Russia and that Trump didn’t obstruct justice.

If this were a sane time in history, the fact that a sitting president didn’t collude with a foreign government, and didn’t obstruct an investigation into the allegations, would have been considered a good thing. But this wasn’t the case on Thursday.

There was audible hostility in the voices of reporters when they questioned Barr about his conclusions. Their comments online reflected their thoughts. Maggie Haberman of The New York Times wrote in a tweet, “[This] is not a press conference—it’s an opportunity for Barr to put a spin on the ball or defend himself.” The tone of others was similar.

Meanwhile, the talking heads who pushed the Trump–Russia conspiracy for nearly two years signaled they would continue their “resistance,” with or without facts. They seem intent on increasing the social chaos they’ve already perpetuated.

And make no mistake. This is all really about chaos.

The special counsel report explains that Russia’s Internet Research Agency (IRA) worked on “active measures” against the United States. Tactics like this go back to the Cold War, and the Soviet Union was extremely adept in their use. Another name for this is ideological subversion.

According to the book “Love Letter to America,” written by the late Soviet defector Yuri Bezmenov, under his alias Tomas D. Schuman: “This process has many names: psychological warfare, ideological aggression, propaganda warfare, etc. The KGB calls it ‘Active Measures.'”

Bezmenov explained that these tactics included the use of double standards, overt and covert propaganda, “agents of influence,” fake “international forums,” and more. They were used to “bring the atmosphere and respectability to Soviet operations,” provoke and manipulate mass demonstrations, spread rumors, create forgeries, and manipulate the media.

The goal of these tactics was to first demoralize the United States, then destabilize it and bring it to the point of crisis, and then, amid that state of crisis, offer the solution of “normalizing” the situation under communist control.

Ideological subversion works through spreading chaos—in society, in culture, and in people’s minds. In a state of chaos, people start to demand a return to order, and this demand is taken advantage of to create new systems of power.

The idea is to drive a wedge between the various groups in a society, to incite conflict between them, and to create an air of hostility and hopelessness in the general public as people watch the chaos unfold.

Creating chaos, sowing discord, and manufacturing division are exactly what the legacy news outlets and talking heads of the “resistance” have been doing for more than two years. Their fake news and use of disinformation have divided this country, led to violence on the streets, and convinced people that their president colluded with a foreign power.

Then, when the truth emerged on April 18, showing that all these concerns had been baseless—that Trump had not colluded with Russia, and that Trump had not obstructed justice during this manufactured crisis—rather than feel relieved, many of them reacted with bitterness and hatred. Rather than back down from their false narratives, they decided to push them even further—even calling for Barr to “recuse himself.”

Barr explained during his press conference that Russia’s IRA worked to “sow social discord among American voters through disinformation and social media operations.”

The IRA had operations that were favorable to the Trump campaign, but it had operations favorable to other candidates as well, including to Bernie Sanders and Jill Stein—as a federal indictment against IRA agents shows. The IRA supported conservative groups such as the Tea Party, but also supported left-wing groups like Black Lives Matter, and even Muslim groups calling to “Support Hillary. Save American Muslims.”

The Russian agents also organized protests through these channels, calling for members of the online groups to take to the streets.

After the elections, these same agents started using these channels to oppose the Trump presidency. This included the “Not my president” rally in New York on Nov. 12, 2016, organized by the Russian IRA.

How many legacy news outlets promoted the Nov. 12, 2016, resistance rally that Russian agents organized? Using the same logic they pushed for two years—that Russia allegedly helped Trump, and so anyone that supports Trump is a “Russian bot”—does their support of that rally mean these outlets are also “Russian bots”?

The key takeaway from details on the IRA operations should be that they were sowing chaos. The agency acted to sharpen antagonisms between political groups on both sides throughout the 2016 presidential election. They encouraged public protests and marches meant to garner mainstream news coverage. And after the election, they encouraged the anti-Trump “resistance.”

The Russian active measures were designed to divide the United States and sow chaos. And the U.S. legacy news outlets have helped them the whole way through.