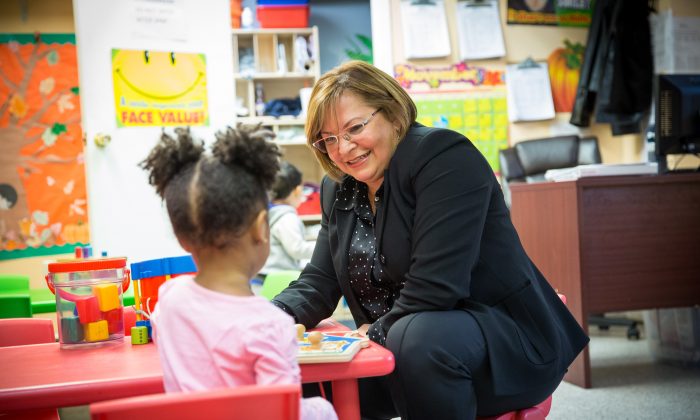 Carla Tellez, founder of Our Children First, a therapeutic learning center for children, is with a child at the center in the Bronx borough of New York on Nov. 22, 2017. (Benjamin Chasteen/The Epoch Times)
Business & Economy

Optimism within the nation’s small-business world continues to soar, reaching its highest levels in years. Thanks to better access to loans, entrepreneurs are increasingly confident about expanding their businesses.

The lending activity of the U.S. Small Business Administration (SBA) has risen in the last 12 months. The New York district has been the top performer among 68 SBA districts, seeing a 36 percent increase in the number of loans and a 15 percent surge in dollar terms in the 2017 fiscal year (from Oct. 1, 2016, to Sept. 30, 2017). And for the first time, the New York SBA broke $1 billion in small-business lending.

“Our numbers are through the roof. We guaranteed more loans than any other district,” said Beth Goldberg, district director of the SBA in New York.

In October, the first month of the 2018 fiscal year, the loan activity in the district continued to expand, with an 87 percent jump in the number of loans.

“Entrepreneurs are really optimistic,” Goldberg said. “They are still providing their services in salons, in medical facilities, in dry cleaners, in restaurants, but there is also this new energy of inventiveness.”

SBA does not lend money directly. It supports small businesses by providing guarantees for bank loans.

Across the country, SBA added 241 new lenders in the 2017 fiscal year. TD Bank was the largest lender of SBA-backed loans.

There is a lot of energy in the small-business community, and the lenders are responding to that enthusiasm, Goldberg said.

Nearly 85 percent of SBA-backed loans are under lending program 7(a), which covers the vast majority of small-business needs, including working capital, machinery and equipment financing, and export support. The remaining loans are under the SBA 504 loan program, which finances the purchase of land and existing buildings.

Our numbers are through the roof. We guaranteed more loans than any other district.
— Beth Goldberg, New York district director, Small Business Administration

Most entrepreneurs borrow money for business expansion, which includes job growth. According to Goldberg, $1 billion in loans supported nearly 21,000 new and existing jobs in the New York district.

Across the country, SBA loans were up by more than 5 percent in dollar terms in 2017. The loan programs provided more than $30 billion to small businesses and supported nearly 630,000 jobs nationwide.

There are nearly 30 million small businesses in the United States.

“Small businesses are the engines of our economy, and half of our workforce either works for or owns a small business,” Linda McMahon, administrator of the SBA, stated in the agency’s annual report.

Nearly half of small-business owners reported increased sales and a quarter of business owners said deregulation has had a positive impact on growth.

William Diaz, the owner of ESC Cabling, a small business in New York, also witnesses the rising optimism and strong credit market. He got his SBA-backed loan last year, before the presidential election.

Diaz, who has been in the business for 15 years, says it has become a lot easier for him to access bank loans in the last four or five years especially.

“This is because of growing business optimism. There is more work, more opportunity. There is so much more demand for loans that people who are lending the money have been forced to supply more,” he said.

Diaz did not apply for a business loan in the last 12 months, but was recently approached by bankers who told him he would qualify for a $50,000 loan, which pleasantly surprised him.

Confidence is certainly in the air, according to Carla Tellez, another small-business owner from New York. Tellez runs Our Children First, a therapeutic learning center for children in the Bronx, founded in 2003.

Until today, she could not get a business loan, as her company lacked a sustainable revenue stream. However, the business has picked up substantially since 2015, and next year she is confident that her company will be able to qualify for a loan. She has observed the increase in lending activity in the small-business world, and she does not want to miss out on the opportunity.

Small businesses are the engines of our economy, and half of our workforce either works for or owns a small business.
— Linda McMahon, administrator, Small Business Administration

“I am very optimistic. I have been working with my CFO and accountant,” she said. “Once we have all the documents ready to present to the SBA or lenders, we will have a better chance to secure a loan.”

Small-business loan approval rates at big banks rose in October, according to Biz2Credit, a small-business lending broker based in New York.

“Big bank lending to small business continues to climb to the point that one-in-four loan applications are approved,” said Biz2Credit CEO Rohit Arora, in a report.

“During the darkest point of the post-recession credit crunch, they granted less than 1 in 10 requests. We have come a long way,” he said.

Small banks are still processing the majority of SBA-backed loans, approving nearly half of the funding requests from small businesses.

This indicates that small businesses’ credit market is robust, according to Arora.

“Entrepreneurs have a better chance of obtaining funding now than at any other time in the past decade.”