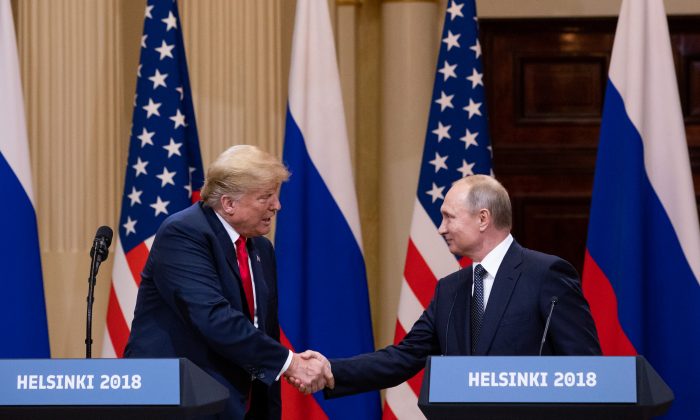 China and Russia have long been strategic partners. But the partnership shows signs of fraying, after the recent summit between Russian President Vladimir Putin and U.S. President Donald Trump.

On July 16, Nezavisimaya Gazeta, a Russian daily newspaper, ran an article titled “The U.S. Offers to Unite with Russia Against Iran and China,” concluding from hints at the Helsinki summit that Trump plans to enlist Russia to help counter China’s threats in trade and geopolitics.

Trump and Putin met one-on-one before an expanded bilateral meeting at the Presidential Palace in Helsinki on July 16. After the two heads of state talked, they held a joint press conference for about 45 minutes.

Trump said the talks were “direct, open, and deeply productive,” adding, “Our relationship has never been worse than it is now. However, that changed as of about four hours ago.”

Putin said, “The Cold War is a thing of the past.”

Since then, in the span of two days beginning on July 18, Russian media highlighted three social problems in China: the behavior of Chinese tourists, the illicit drug trade, and corruption in China’s railway system. The criticism was by no means an accident, said Li Hengqing, independent analyst at an NGO in Maryland, in an interview with the Chinese-language edition of The Epoch Times.

“The friendship between Putin and the Chinese regime is based on personal gain,” Li said. “So when Putin saw an opportunity to improve its relationship with the U.S., Europe, or NATO countries, he would naturally abandon his vested interests with China.”

On July 18, the Siberian Times reported on poor behavior by Chinese tourists who visit Glass Bay, a cliff-side beach at the Pacific coastline in Vladivostok City. It is known for the eroded glass remains left on the beach after years of people dumping old bottles and jars.

The report carries a video showing two Chinese female tourists picking up glass remains from the beach and putting them into plastic bags. The video carries English captions, which explain that even though there is a sign on the beach telling tourists not to take any glass remains, Chinese tourists coming in busloads all walk away with a plastic bag filled with it.

Glass Bay will turn into an ordinary sand beach after about 20 years if people keep taking away glass remains, said professor Pyotr Brovko of the Far Eastern Federal University, according to the report.

“Uncivilized” behavior by Chinese tourists have been well-documented in many countries, prompting theChinese regime to draft a blacklist that forbids certain Chinese citizens with a record of uncouth behavior from traveling abroad.

Just a day later, on July 19, Russia’s drug enforcement agency reported that 90 percent of the illegal drugs found in Russia originate from China, according to Radio Free Asia (RFA). The report explained that many illicit drugs were shipped to Russia through packages disguised as Chinese-made cooking oil, spices, or food seasonings.

Additionally, two Chinese nationals were found guilty of trafficking synthetic drugs to Russia and were sentenced to 10 years and 17 years, as well as fined $12,800, on March 30 at a Moscow court.

Also on July 19, Ivan Zuenko, a research fellow at the Center for Asia Pacific Studies within the Russian Academy of Sciences, wrote in an article for Russian magazine Profile, that a $20 billion joint Sino–Russian project to build a high-speed railway connecting Moscow and Kazan, a city in southwestern Russia,never got off the ground.

The project—part of China’s ambitious One Belt, One Road initiative to expand foreign investments and political influence throughout Europe, Asia, and Africa—was originally slated to be completed before Russia hosts the World Cup this year. Chinese premier Li Keqiang had signed a memorandum of cooperation on the project when he visited Russia in October 2014. Russia would pay $6.5 billion, while the Chinese side pays $13.5 billion.

The article questioned the economic benefits of building the railway at such an enormous cost. It also cited the situation in Sri Lanka, where China constructed a deep-water port at Hambantota and an airport at Mattala. Sri Lanka ended up spending 95.4 percent of the nation’s budget to repay the loans owed to China but remained in debt. The projects were also part of the Belt and Road.

In December 2017, Sri Lanka handed over control of Hambantota to China on a 99-year lease, as part of a plan to convert the $6 billion loans into equity, according to Reuters.

Finally, the article noted that China’s high-speed railway system is “one of the most corrupt areas” of the country. China’s former railway minister, Liu Zhijun, was sentenced to death with reprieve for corruption in July 2013.

According to Hong Kong media, he used the ministry’s coffers as his personal piggy bank and embezzled billions.

“Every year since 2016, China’s railway system had an annual loss of about 470 billion yuan (about $69 billion). Railway projects are opportunities for Chinese officials to get promotions and get rich,” Li said.