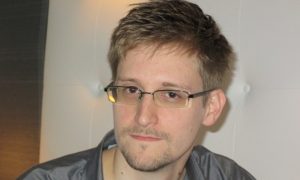 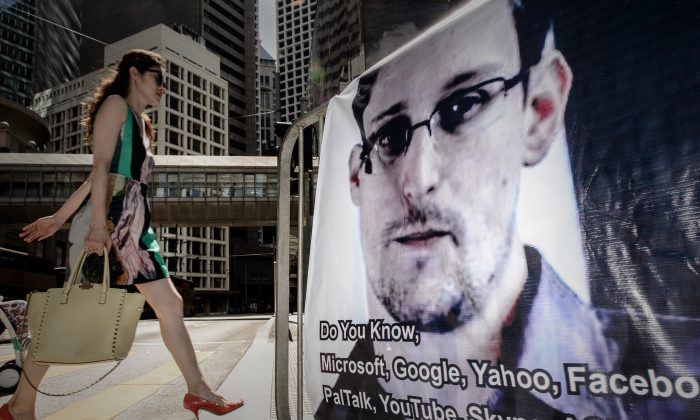 A woman walks past a banner displayed in support of former U.S. intelligence contractor Edward Snowden in Hong Kong on June 18, 2013. Snowden has recently begun revealing details of U.S. cyber operations against PRC-linked targets, a move that differs from the initial explanation he provided for why he was going public. (Philippe Lopez/AFP/Getty Images)
International

In Shift, Snowden Now Said to Reveal US Monitoring of China

The former NSA contractor Edward Snowden has exposed a range of alleged details on the United States’s computer network intelligence gathering activities, mostly directed against the People’s Republic of China, according to a recent series of articles by the South China Morning Post.

Information disclosed includes the alleged U.S. penetration of the computer network of Tsinghua University, one of China’s most prominent colleges, as well as the computer systems of Pacnet, a major fibre-optic network artery that connects the Asia-Pacific to the United States, and the snooping of millions of domestic Chinese cell phone text messages.

Snowden’s recent statements to the Post differ markedly from the original reason he cited for exposing classified information about U.S. government surveillance operations. “I don’t want to live in a world where there’s no privacy and therefore no room for intellectual exploration and creativity,” he had said in one of his first interviews with the UK’s Guardian.

He had at that time only exposed information about the National Security Agency’s (NSA) capture of phone call logs and other communications metadata, including from major American Internet companies. “For him, it is a matter of principle,” the Guardian reported on June 9.

He also said: “I carefully evaluated every single document I disclosed to ensure that each was legitimately in the public interest… There are all sorts of documents that would have made a big impact that I didn’t turn over, because harming people isn’t my goal.”

But now he is alleged to have revealed operational information about U.S. cyber intelligence activities against a potential adversary, the PRC—the public interest in which is unclear—which likely complicates that original narrative.

“The first thing Snowden said was that he was going to expose U.S. surveillance activities to protect the privacy of citizens, but now what he has exposed is of a very, very wide scope,” said Chen Pokong, a New York-based analyst of contemporary Chinese affairs. “This clearly affects U.S. national security.”

Chen said that though the veracity of the claims Snowden has now made cannot yet be verified—a previous claim that the network of the Chinese University of Hong Kong was penetrated by U.S. hackers was later denied by the school—but that by the very brief descriptions Snowden provided, they seemed to be of legitimate U.S. security interest.

“We know how the Chinese Communist Party partners universities with military organs to conduct training and network operations,” Chen Pokong said. He listed a number of known cases, including in Shandong and Shanghai. A 2011 testimony before congress by Chinese military researcher Richard D. Fisher, Jr. identified Tsinghua University as a “key PRC center for Information Warfare and cyber warfare research.”

Given this background, Chen Pokong thought it may have been “understandable” that the U.S. would seek to conduct reconnaissance and intelligence activities on its network.

Aside from the details of Snowden’s new disclosures—the South China Morning Post’s articles were light on specifics—the revelations are having the inevitable effect of putting Snowden, and his motives, again under tough scrutiny.

On May 20 Snowden boarded a flight from Hawaii, where he worked for the U.S. intelligence contractor Booz Allen Hamilton, to Hong Kong, a quasi-autonomous part of the People’s Republic of China. Just as a high-profile meeting between U.S. President Barack Obama and Chinese Communist Party leader Xi Jinping was getting underway in the Californian desert — much discussed because it was to be the first time that the U.S. would address the CCP frankly on the latter’s long-running commercial espionage of American corporate secrets — Snowden began leaking documents about the NSA’s surveillance operations.

The day after the meetings concluded he appeared personally in the Guardian, claiming responsibility.

“The timing was so peculiar,” says Chen Pokong. “The timing was perfect for the Chinese side to refute U.S. accusations of cyberhacking and counterattack the United States to protect themselves.”

Other observers, such as John Bolton, a senior fellow with the American Enterprise Institute in Washington, D.C., noted that Snowden’s disclosures had the effect of flipping the cyber narrative on the United States, and creating a “moral equivalence” between the two countries’ activities.

The recent disclosures go beyond just rhetorical significance, Chen said. “The possibility that Snowden was instigated by the Communist Party to defect can’t be ruled out,” he said. “It’s a mystery at this point, but this possibility is there.”

In one frank commentary, Xinhua, the Chinese state mouthpiece, itself said: “The drama around Snowden also tends to support China’s stand on the issue of cyber security.”

Chen recalled the 2012 attempted defection to a U.S. consulate of Wang Lijun , the chief of police of Chongqing, a southwestern city in China, and also the escape of Chen Guangcheng, a blind Chinese rights lawyer, to the U.S. Embassy in Beijing. And now Snowden fleeing to Hong Kong. “This type of thing used to happen during the Cold War,” Chen remarked.

Soon after the Post stories, Apple Daily, a Chinese-language Hong Kong tabloid, reported that Snowden had been contacted and put in the custody of the Hong Kong police; the counter-terrorism unit had placed him in a safe house, it said, where he would be kept until he safely left Hong Kong.