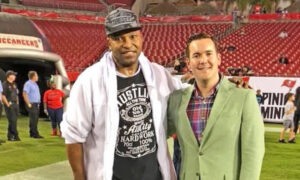 In Search of Truth and Beauty, an Antidote to Nihilism: Stephen Blackwood

The idea that there is no truth but only power has pervaded today’s cultural, civic, and political institutions at large. Nihilistic in nature, it’s being witnessed alongside an “extraordinary civilizational crisis.”

“This idea that there’s no truth but power, the nihilism behind it, it emanates into all of the institutions and the forms of life and culture through which we understand ourselves,” said Stephen Blackwood, the founding President of Ralston College, a new university in Savannah, Georgia.

The same idea erodes a person’s belief in his or her potential, and “what you end up with is like a human being in a cage, and you’re looking at a dark horizon, you’re blinded,” he told The Epoch Times’ “American Thought Leaders” program.

“Once you close that [horizon] down, and you say ‘No, there’s just the battle of the will to power’—one against everyone and everyone against each other—you know, life gets pretty damn grim.

“And it’s essentially a kind of nihilism where there is no sort of independent realm of truth, or beauty or goodness, or anything that we as human beings have access to innately … to be able to understand and comprehend and grapple with the complexity, the depth, the difficulty, the hardness, the beauty of the world, and of reality more broadly construed.”

Despite having greatly progressed scientifically and technologically, society is in some ways witnessing an “extraordinary civilizational crisis,” Blackwood told host Jan Jekielek.

“We are facing civic alienation, inner city violence, the devastation of our inherited intellectual and spiritual culture. We’re looking at a pretty widespread failure of our educational system at every level,” he observed.

“I think perhaps the best way at getting at this is through what has become the shorthand of the ‘meaning crisis.’ I mean, what does it mean to be a human being? And are our human beings able to live lives of depth and beauty and meaning at the individual and communal level? … We’re facing some very, very serious problems.”

He added, “There is no metric by which a human culture can be judged other than by whether human beings are able to live meaningful lives within it. And I think by that standard, in very significant ways, we are failing.”

Another serious threat to Western civilization is an ideology currently prevalent in society, including in the academies and institutions of higher learning at large, that stifles free thought and speech, Blackwood observed.

“There is a kind of unhinged side of some of the more extreme forms of ideological activism, and those are suffocating [the] fundamental human liberties. Those denigrate human dignity, those oppress human beings at the level at which we most importantly need to live, which is our own thinking, our conversations with others, our ability to understand and process and engage with the world and other human beings.

“This sort of culture of shame and censorship is a very profound threat to the very most basic elements of living a free and full human life.”

Part of this ideology disregards freedom of thought and freedom of speech, and even considers them as bad things. “The suppression of free speech results in the alienation of us from our most critical capacity to engage the world, both individually and together,” Blackwood commented.

“I’m not a catastrophist,” he noted. “I’m not trying to absolutize this. I think there are all kinds of wonderful things happening in various institutions. I’m not by any means saying that we should tear it all down. I think that would be pure nihilism to say that.

“And yet at the same time, I think we have to frankly admit that there are very widespread structural systemic problems extending throughout most departments at most institutions, and that there is no longer at most universities a genuine culture of free inquiry. There is an increasingly dark atmosphere of fear, shame, and censorship.”

It was these observations, among others, that spurred Blackwood and his colleagues to start Ralston College, a new institution of higher education ardently committed to free speech and open discourse.

“What we are seeing very widely is that the universities are no longer the place that most people turn when they’re looking for answers to the defining and perennial questions of human life,” said Blackwood. “The bedrock of humanistic inquiry is really the question of, how can we live a meaningful life? What does it mean to be a human being? What is justice? What is truth? What is beauty? What is redemption, forgiveness, virtue?”

Those are the questions into which one can explore at Ralston College, which describes itself as “a movement dedicated to seeking the truth without censorship or shame … a call to build a free and flourishing culture for one and all.”

“The defining and fundamental purpose [of Ralston College] is to enable people to live reflective, free, and meaningful lives,” Blackwood said. “And the fact is, is that we need intellectual tools to do that. Why read Shakespeare? Why read Plato? Why listen to Bach? We do this because these works of art and intellect open up to the horizon of our own self-understanding.”

The new university had been given degree-granting powers by the state of Georgia as of January. So far, it is planning to offer a Master of Arts degree in the Humanities, a symposia in Savannah, as well as short online courses on a range of humanities subjects.

Ralston College is a partner of FutureLearn, a global online learning platform. The online courses that will be rolled out aim to “reveal, consider, and better understand the depth and complexity of the human condition by exploring rich and important works of literature, history, philosophy, religion, music, and the visual arts,” according to the university’s website.

“We are simply looking to be with the university, and with all universities,” Blackwood said. “[Universities] are meant to be places of free inquiry, places where young people, and people of all ages can come to discover the riches of art and intellect, from past cultures and civilizations, places in which they can wrestle with the most difficult and fundamental human questions. Places where, above all, they can acquire the tools, and the forms of self reflection that will enable them to lead meaningful, full and free lives.“

To transcend the current nihilism and void of meaning, Blackwood emphasized the need to build.

“The great work of our time is not to deconstruct but to build, not to tear down or to alienate, but to recover forms of living fully and freely together,” he said. “What that depends on, above all, is our educating young people, and truly giving them—not indoctrinating—but helping them open up themselves in the world, such that they can build and rebuild that which we have allowed to fall into disrepair.”

Despite the state of the current culture that some may feel sad, depressed, or alarmed about, we should not give up hope, Blackwood said. “To give up hope is already to surrender to the claims of the very nihilism we need to transcend.”

“The only antidote to the widespread nihilism is to recover, to re-apprehend the realities that nihilism denies—truth, beauty, goodness, forgiveness.

“I think the stakes are very high. But there is as there always is great reason for hope.”