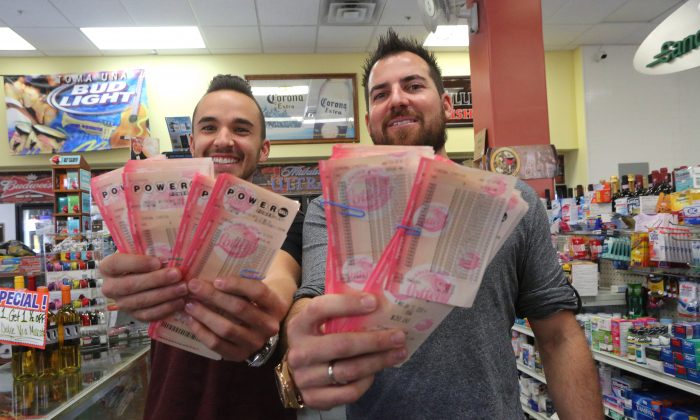 Ryan McGuinness, left, and Shane Krugman display 3,000 Powerball lottery tickets that they had purchased from the Metro Market, Wednesday, Jan. 13, 2016, in Tampa. The two Tampa men have organized a lottery pool that has about 270 participants who have chipped in at least $500 and bought more than 67,000 tickets. The Powerball jackpot for Wednesday night's drawing is at least $1.5 billion, the largest lottery jackpot in the world. (Skip O'Rourke/The Tampa Bay Times via AP)
HK Life

DES MOINES, Iowa (AP) — When the largest-ever lottery prize is finally awarded, the winners and losers will extend well beyond the lucky few who hit the jackpot and the multitudes of disappointed ticket buyers. Here’s a breakdown of how Powerball affects the players, the public and others.

The biggest Powerball winner is actually state government in the jurisdictions that participate. That’s 44 states as well as the District of Columbia, the U.S. Virgin Islands and Puerto Rico.

Each jurisdiction spends the money raised through the lottery differently, with the rules determined by state Legislatures. In some states, the money goes directly to education or college scholarships. Elsewhere, it might fund transportation. Some states send it to their general fund, where lawmakers decide how to use it.

In fiscal year 2015, for example, Powerball and other lottery games generated $74.5 million for Iowa’s general fund. In California, the nation’s most populous state, the games raised about $1.3 billion for education in the 2014 fiscal year.

Owners of convenience stores and other ticket-selling locations earn a small percentage of each sale, but more important, people often buy something extra when they stop for Powerball tickets.

The Kum & Go chain, which has 430 gas stations and convenience stores in 11 mostly Midwestern states, has seen a significant increase in sales from the Powerball rush, though spokeswoman Kristie Bell declined to give specific figures.

At the tiny Marketplace shop in downtown Des Moines, owner Anastasia Walsh said her overall sales have been up about 10 percent in recent weeks because of all the Powerball sales.

WINNER: THE WINNERS OF SMALLER PRIZES

Lottery officials often note that while the jackpot gets all the attention, far more players get a nice consolation prize of $1 million for matching the five white balls but missing the Powerball. And if they pay an extra dollar when they buy their ticket, that prize can double to $2 million.

In last Saturday’s drawing, 25 people matched the five numbers and won $1 million, and three players paid the extra buck and won $2 million. Players also receive much smaller prizes for matching as few as three numbers or just the Powerball.

There hasn’t been a winner since early November, and that’s why the jackpot has grown so large, from an initial $40 million to $1.5 billion.

As more people play Powerball, the chances for a winner improve, simply because more of the 292.2 million possible number combinations are covered. The chances also grow that more than one person will match the five white balls and one red Powerball, meaning the prize could be divvied up between two or more winners.

A single winner could choose between an annuity paying $1.5 billion over 30 years or a lump sum of $930 million. Those figures are before federal and state taxes, which generally eat up close to half of the money.

In the past week, calls to the Washington-based National Council on Problem Gambling’s help line have soared, largely because of interest in the Powerball jackpot, Executive Director Keith Whyte said.

The council suddenly has so much attention that its website crashed earlier in the week from all the extra traffic.

Whyte said the surge in interest in Powerball is especially difficult on people who have managed to stop gambling but now find their friends and co-workers talking about the big prize.

“It does glamorize it,” he said. “It seems like everyone is doing it and if not, what’s wrong with you?”

Pity those who study statistics and other forms of math, as so many people across the country dream of a prize against all odds.

The odds of 1 in 292.2 million are even worse than the 1 in 175 million odds that were in place until last fall, when the Powerball system was changed to build bigger jackpots.

“The odds are so large,” said Scott A. Norris, an assistant professor of mathematics at Southern Methodist University, “that people don’t have any sense of what they mean.”