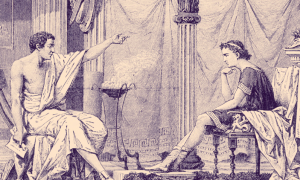 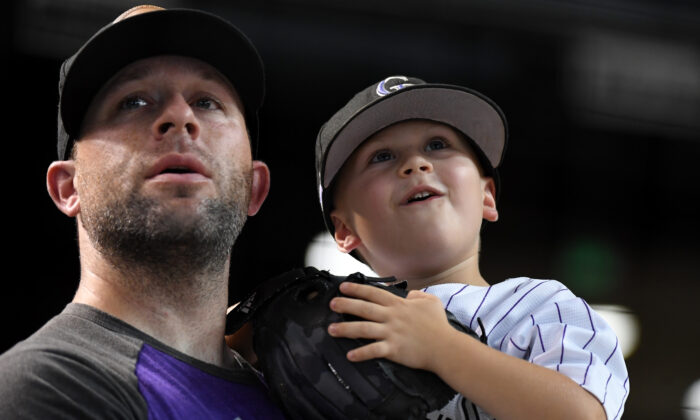 A father and son watch batting practice prior to a game between the Colorado Rockies and Arizona Diamondbacks at Chase Field in Phoenix, Ariz., on Aug. 20, 2019. (Norm Hall/Getty Images)
Viewpoints

In Praise of Masculine Love

I heard a love story recently that brought me to tears. It wasn’t a Shakespearean tragedy of star-crossed lovers. It wasn’t romantic at all. It wasn’t a tale of a mother’s self-sacrifice for her children—quite the opposite.

It was a simple tale of masculine love—something so rarely praised and so often devalued that Western culture is dying for the very lack of it.

A highly regarded U.S. military leader, a veteran of one of this country’s toughest military units, told me his story.

Many years ago, my friend’s son was about 16. He was smoking marijuana every day, and no matter what his parents told him, or how much they pleaded or tried to reason with him, he simply wouldn’t quit. The son’s drug habit became a big family issue.

The boy’s mother offered him unconditional love. She would be there for him, no matter how he behaved. When the boy’s father threatened to throw his son out of the house, his distraught mother would tearfully plead his case. Her love for her son was overwhelming and unquestionable—and completely ineffective.

Eventually, the father, a man who had led some of the world’s toughest troops into combat, made one of the bravest decisions of his life. He put his son in the back of the family car. He drove him down to the local shopping mall and made him get out. He told his son: “This is your new home. … You stay here until you learn to love this family more than you love marijuana.”

The father drove away, choking back tears and praying all the way home.

Five long, tearful, and fearful days later, the boy turned up on the family doorstep, and said: “I’m never smoking that stuff again. Can I please come home?”

The boy was joyfully welcomed back to the family—and he kept his word.

The big lie of modern Western society is that masculinity is dangerous, destructive, even toxic. Masculinity is harsh and unforgiving. It’s warlike, aggressive, and intolerant. It needs to be suppressed. We need more love, and that’s essentially a feminine virtue. Feminine love (the only “real” love, we are led to believe) is kind and forgiving, accepting and tolerant, welcoming and unconditional.

The truth, known to virtually every civilization in world history but somehow largely forgotten in our own, is that there are two sides to love: the masculine and the feminine. Both are essential to any healthy family, church, or society. And in proper balance, they produce results far greater than the sum of the parts.

A Need for Masculine Love

No family can truly prosper without feminine love. How sad it must be for some to grow up without memories of a mother’s unconditional love: having your grazed knee bandaged, eating a hot meal with mom on a cold rainy day, and snuggling on her lap while she reads you a story. Or seeing her beam with pride when you graduate high school, or watching the tears roll down her face when you ship out to a combat zone.

But what of the love of the father? Can any family reach its true potential without masculine love? This is the love that demands respect, that will lay down conditions. This is the dad who will kick your backside if you disrespect your mother. The father who will make you clean up your room, or who will bawl you out for a bad report card.

This is also the father who will teach his son to stand up for himself, and will expect him to strive for goals. He’ll demand that the boy shows courtesy to his elders and be willing to protect his younger siblings and those weaker than himself.

This is the father who will be a rock for his daughter, protecting her from every threat and danger, especially from boys like he used to be. He will encourage her to be the best she can be in every aspect of life. He will teach her to respect herself and look for a husband who is at least as good as her dad.

How many millions of young Western men—most other cultures haven’t gotten as crazy as us yet—are rotting in jails, working endless dead-end jobs, smoking dope all day long on welfare, or living in mom’s basement at 35 because they never had a dad around to take them fishing or boot their backsides when needed?

How many millions of young women move from one hopeless relationship to another because they so lack self-respect they’ll latch on to any man who’ll have them? How many of them struggle to develop real meaningful relationships because they have no yardstick to recognize a good man, even if they happen to stumble across one? How many millions of their children are almost certain to repeat the same cycle?

Masculine love isn’t just desirable; it’s essential for our survival. A lack of the masculine qualities of leadership, decisiveness, discipline, and courage are destroying the Western family, churches, and culture.

Christianity, the bedrock of Western culture, was once a very masculine religion. Jesus came with a sword, not a poem. He overturned the moneychangers’ tables in the Temple and didn’t attempt to mediate a peaceful resolution.

Modern Western Christianity is drowning in feminine love. Seldom will you hear an American or European priest or pastor ever get tough with his flock. You’ll hear very little about renouncing sin or denouncing evil in most Western churches.

Your modern Western church experience probably won’t include a military veteran priest or pastor who can preach a sermon that will chill your blood and cleanse your soul. You will likely not sing songs of praise such as “Onward Christian Soldiers.”

A caricature of today’s clergy would be a wispy-bearded, latte-drinking pastor, wearing skinny jeans and playing sappy “Christian” rock music, while he (or she) tells you that Jesus loves you no matter what you do, and as long as you put some money in the collection plate, you’re good with God—whoever she may be.

Western Christianity has all but abandoned masculine love, and our churches, families, and culture are dying because of it.

The fact that many people will be enraged by what I have just written only proves my point. We have so lost our bearings in the West that stating obvious truths about the virtues of masculinity and its role in family, church, and societal leadership could be enough to get you fired, banished, murdered, or even de-friended on Facebook.

To recover our culture, we must restore our respect for masculinity and the masculine virtues. We must recognize that masculine love is what drives young men to defy tyrants, fight just wars, explore space, create businesses, plant churches, and build strong families.

Life without feminine love is sterile, suppressive, harsh, and cold. Communist China, which so undervalues femininity that it has aborted tens of millions of baby girls under the “one child policy,” is a case in point. Life without masculine love is, to borrow from Hobbes, “poor, nasty, brutal, and short.” Go to any inner-city welfare slum, where fatherless families are the norm, to see proof of that.

Any family, church, or society that can properly honor and balance both feminine and masculine love is destined to grow and prosper. We need both aspects of love to make us whole—and holy.