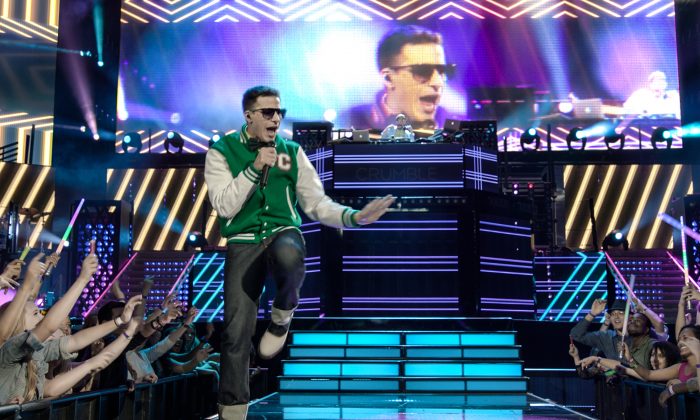 In ‘Popstar,’ Lonely Island Aim for a ‘Spinal Tap’ for Today

NEW YORK—Lonely Island, the trio of Andy Samberg, Akiva Schaffer and Jorma Taccone, has technically already made the leap to the big screen in 2007’s wannabe daredevil comedy “Hot Rod.” But it won’t be until “Popstar: Never Stop Never Stopping” hits theaters that the full experience of Lonely Island—in all their seductively wrapped male anatomy glory and seafaring glee—lands at the movies.

“This is the first one that’s really ours, from the ground up,” says Samberg. “‘Hot Rod’ was a script we inherited and then we reworked it. We definitely took I’d say like 60 to 70 percent to our tone. Whereas this one we completely wrote and are producing it. We’re hoping it’s sort of the best of what we do.”

Though the title plays on Justin Bieber’s 2001 film “Never Say Never,” Samberg says the group was inspired by other self-aggrandizing music documentaries, too, to make a contemporary ode to “This Is Spinal Tap.”

“The genre of it is born out of the new wave of pop documentaries that (Justin) Bieber, Katie Perry and One Direction were making,” he says. “It felt like the way ‘Spinal Tap’ did it with rock docs, now there was sort of this new version of it that’s sort of newer and shinier and poppier.”

Rest assured, there will be Bieber jokes. But the target of “Popstar” is broader, taking in all of today’s social media-saturated music world. Pink and Adam Levine are among the movie’s many cameos.

“You see kind of the way people have their inner circle and their bubble and it kind of travels them around and insulates them. And then at the same time they’re divulging everything about their lives on social media,” says Samberg. “We thought there was something really interesting and potentially really funny about how much is put on the relationship between artists and their fans now.”