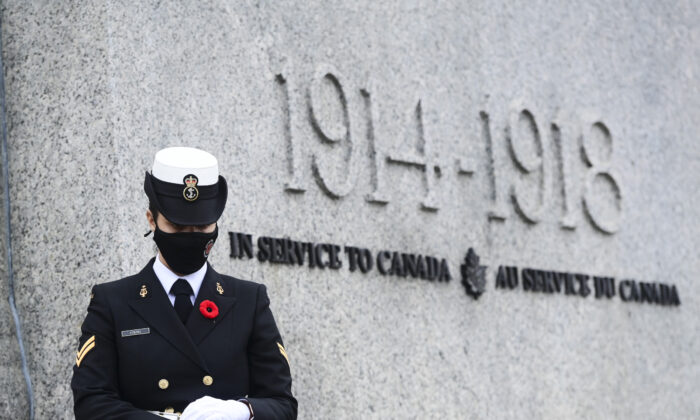 A sentinel stands guard during the Remembrance Day ceremony at the National War Memorial in Ottawa on Nov. 11, 2020. (The Canadian Press/Sean Kilpatrick)
Canada

Canadians who wish to pay tribute to veterans who sacrificed their lives for the country, and those who still serve, can choose to attend in-person Remembrance Day ceremonies this year in some cities, rather than watching the events on TV or online due to COVID-19 measures.

The Royal Canadian Legion has announced Canadians are welcome to attend the national Remembrance Day ceremony at the National War Memorial in downtown Ottawa on Nov. 11. The Legion said it was made possible due to the changes to crowd restrictions by the Ontario government and the City of Ottawa.

The ceremony, which will start at about 10.45 a.m.,  will include many of the traditional elements such as playing the Last Post, observing two minutes of silence, and the placing of wreaths.

The ceremony will also be broadcast live on TV and on Facebook. Access to roads around the memorial before and during the ceremony will be closed between 7 a.m. and 1 p.m., according to the city.

The City of Toronto says Remembrance Day ceremonies will be held across the city at 10:45 a.m on Nov. 11. Canadians can attend in-person ceremonies at several locations including the Toronto Old City Hall Cenotaph, Scarborough War Memorial, and Etobicoke Civic Centre Cenotaph.

A live broadcast will be aired on the city’s YouTube channel and local TV stations at 10:55 a.m. on Remembrance Day. In-person attendees are encouraged to wear a mask or face covering if physical distancing of two metres can’t be maintained, the city said on its website.

To commemorate the fallen heroes, all Toronto Transit Commission (TTC) vehicles will stop for two minutes at 11 a.m. on Nov. 11. Window cards with wordings “Lest We Forget” will be placed in TTC vehicles prior to Remembrance Day, and the City of Toronto sign will be lit in red on Nov. 11.

The city of Edmonton will hold a short Remembrance Day ceremony outside at the Cenotaph on City Hall Plaza on Nov. 11. There will be no indoor public ceremony inside city hall this year due to COVID-19 risks, its website stated.

Veterans and active members in military uniform or legion dress with identification cards showing their past or current military service are entitled to free public transit on Nov. 11. The Edmonton transit system, including buses and trains, will stop at 11 a.m. for one minute to pay tribute to the veterans “if it is safe to do so.”

There are also no ceremonies to be held at municipal cemeteries. While the city says the cemeteries may serve as places for “calm and quiet reflection,” it still requires public health guidelines to be followed for those who choose to go to cemeteries on Remembrance Day.

The city of Calgary is taking a scaled-down approach with many of its ceremonies to be held virtually, with only some allowed for in-person visits.

The Military Museums in southwest Calgary is one of the venues that invites the public to attend its outdoor Remembrance Day ceremony on Nov. 11. However, this year attendees must provide proof of double vaccination before they can enter the grounds, it says on its site.

The annual Remembrance Day ceremony at Victory Square, which typically attracts tens of thousands of people, will be a virtual event for the second year in a row due to the pandemic. The ceremony will start streaming online for the public to watch at 10.30 a.m. on Nov. 11.

The Lynn Valley Legion in North Vancouver will hold a short outdoor ceremony starting at 10:50 a.m. on Nov. 11, according to the Royal Canadian Legion. The public will be asked to stand across the street and follow COVID-19 protocols. Wreaths will be pre-laid.

Montreal has also scaled back its Remembrance Day ceremonies for the second year due to the COVID-19 pandemic.

Westmount and Montreal West both hosted public ceremonies over the past weekend. The main event at Place du Canada will take place on Nov. 11 at 11 a.m., but will not be open to the public.

Canadian flags across the country, which were lowered to half-mast Nov. 8 for Indigenous Veterans Day, will be hoisted again at sunset so that they can be lowered on Remembrance Day to honour Canada’s veterans and war dead.

This year also marks the 100th anniversary of the poppy. The poppy became a symbol of remembrance after Madame Anna Guerin, inspired by John McCrae’s poem “In Flanders Fields,” had the idea to distribute the poppy on Armistice Day as a way to raise money for veterans’ needs and remember those who died during World War I.